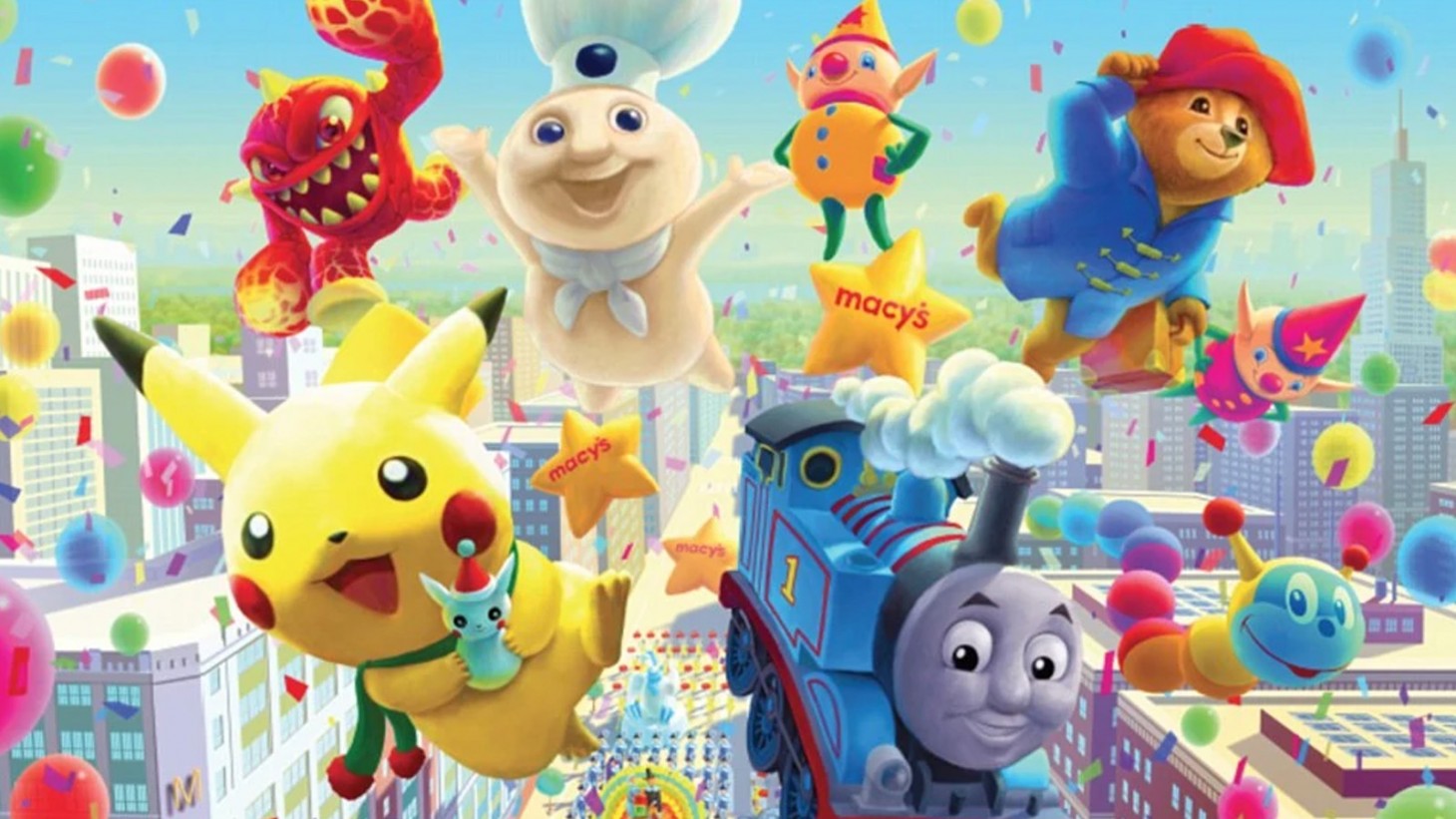 Thanksgiving Day used to be the start of the holiday shopping season, and the parade Macy's holds in the middle of New York City every year is designed to promote the biggest names and brands you'll be hearing about for the next month. Given how big of an industry video games have become in the last 40 years, you'd think every other balloon in the show would feature a memorable Nintendo or Sony character hovering down the chilly street. Surprisingly, that's not the case, and only a handful of characters and games have had the honor to join in the festivities. We've collected them here in one place for you to gawk at, and have ranked them for your enjoyment.

Here are all of the video game balloons featured in the Macy's Thanksgiving Day Parade over the years: 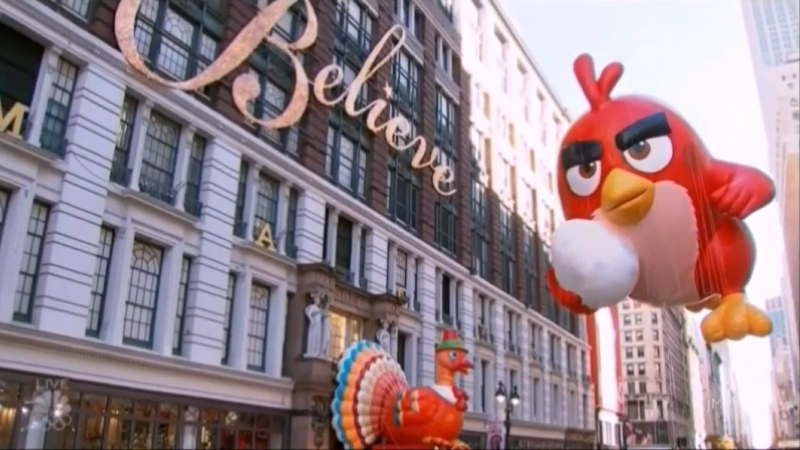 Technically designed after the character from the Angry Birds movie, we'll still allow Red on this list because he also originates from a video game. You know what? This balloon is a messed-up inclusion for this event. Angry Birds love to be flung at buildings to take them down. They're beings of pure destruction that should not be anywhere near tall structures in a crowded city. It's just not safe for a nice, family-friendly event.

On the other hand, it looks just like the character from the movie, so mission accomplished there. 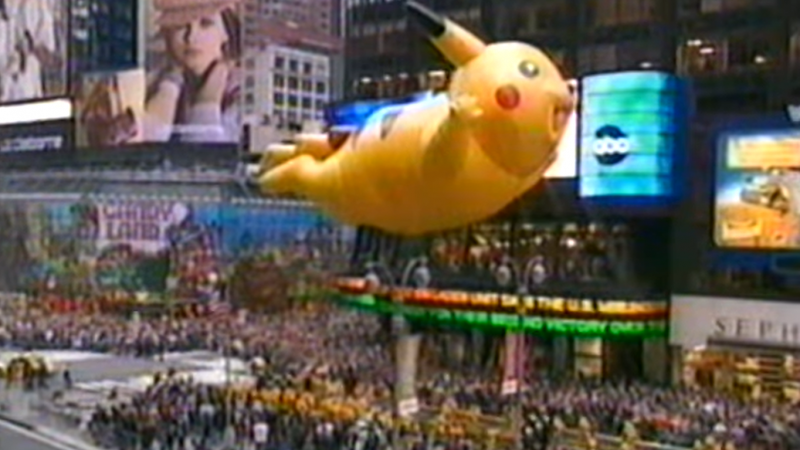 The Pokémon craze hit America hard in 1998, captivating the hearts and minds of children across the nation. While it was arguably the biggest game phenomenon in recent memory, the enthusiasm arrived too late to be included in that year's Thanksgiving Day Parade. Somehow, it took three years for Pokémon's most prolific mascot, Pikachu, to make his Macy's Parade debut and start its journey as the video game character to appear the most times. 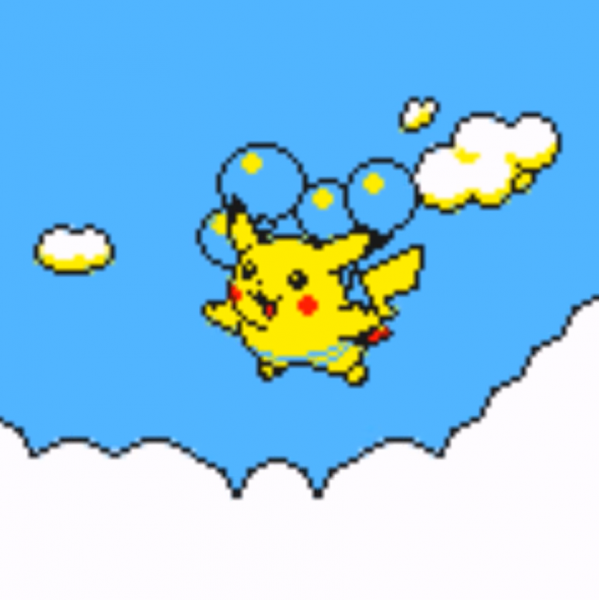 Pikachu's 2001 design is noticeably different from the electric rodent we know today. It has a protruding snout, more pronounced cheeks, and straighter, pointier ears. Its pose is a nod to the flying Pikachu from Pokémon Yellow, which has the mascot floating with the help of several attached balloons. How fitting! 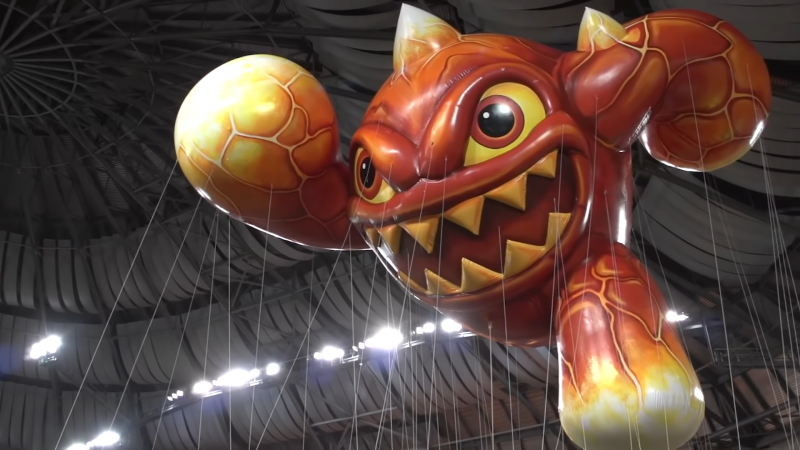 Remember toys-to-life? Well, this is toys-to-larger-than-life (believe me, I'm not too fond of it either, but it had to be said). Eruptor made his gaseous, inflatable debut in the 2014 Macy's parade and managed to stay in the show for three years. Maybe one of the best-realized recreations on this list, this sole Skylander representative features a fun, active pose that makes it look like he's trotting through the streets of New York City.

It's too bad this massive Eruptor didn't make the PR cycle for Skylanders: Giants because that would have been *chef kiss* perfection. Honestly, I was going to bury the Skylanders franchise here a little, but this fiery fiend is growing on me. Maybe I should check eBay quick to see if anyone is selling their figures... 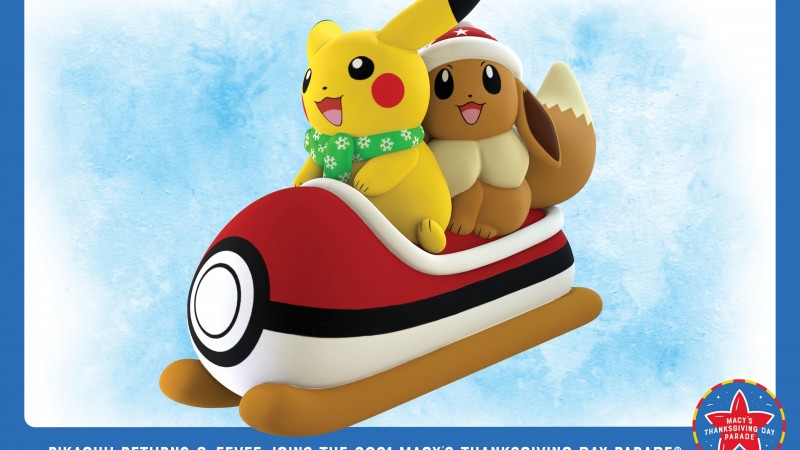 Here's our newest Pokémon balloon, set to debut in 2021. For the first time, Pikachu isn't the only Pokémon floating through the NY streets. Eevee is included since it's become the co-mascot for the franchise, thanks to 2018's Let's Go games elevating the adorable creature to that status. Both are seated in a Pokéball sled, reminding us of the coming winter and snow. Replacing the snowman Pikachu, this balloon celebrates the 25th anniversary of Pokémon. It's ... fine. The sled brings the design down a notch, and Eevee could stand to have its own giant balloon and crew pulling it along. 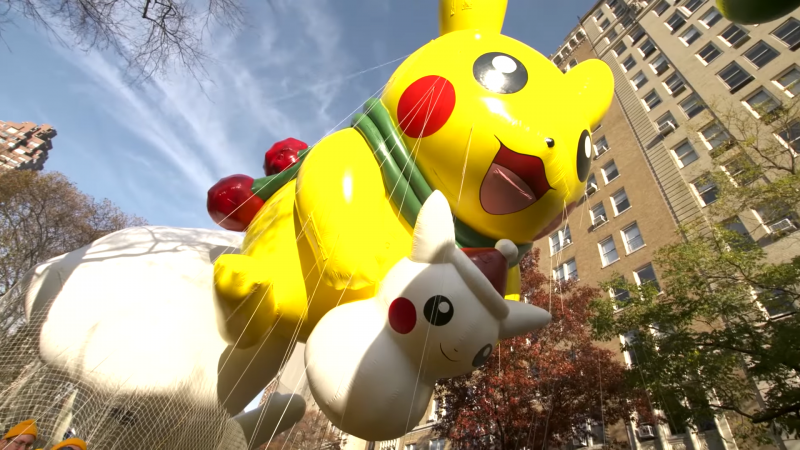 It's a Pikachu wearing winter weather gear and snuggling a little snowman Pikachu. What's not to love? Having the second-longest reign of the Pikachu balloons in parade history, it's not hard to see why this one was kept around until recently. It's adorable, seasonably appropriate, and will be sorely missed in the line-up this year. 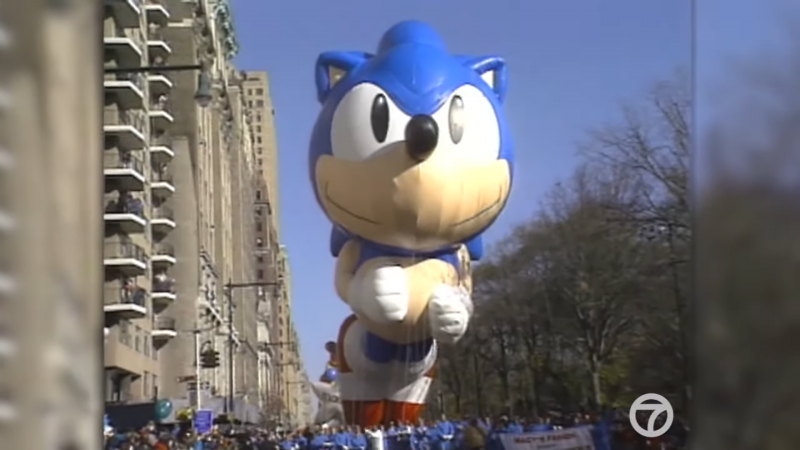 While it’s not the most impressive balloon in the history of Thanksgiving day parades, it is high on this list for one notable reason. This inflatable Sonic is the first video game balloon to fly in the annual event. The year this balloon debuted was even a notoriously off year for the blue blur, with the highly anticipated sequel Sonic 3 missing the vital holiday season the parade is meant to advertise for and instead released a few months later, in February 1994.

In an unfortunate series of events during Sonic's inaugural 1993 parade, the balloon was caught in some strong winds, blowing the mascot into a lamppost and puncturing its eye. It deflated then and there, with pieces of the lamppost injuring two parade-goers. Not the right foot for video game balloons to start on, but luckily the floating blue hedgehog was patched up and flew in the parade for a few more years before being replaced with an updated design. 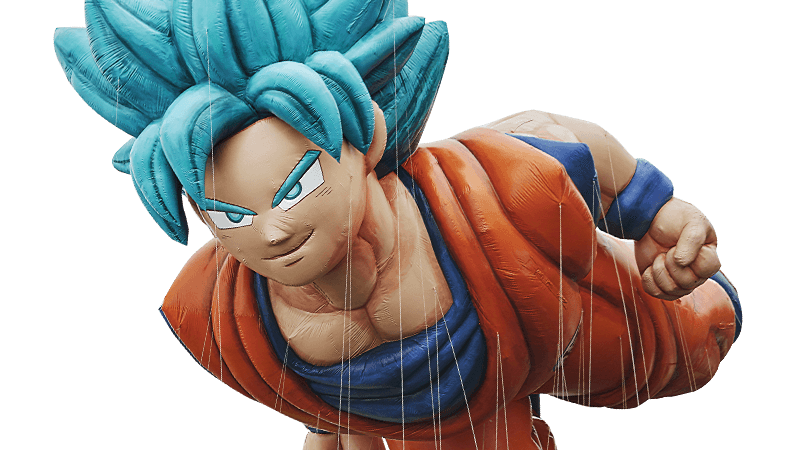 Okay, so technically, Goku isn't a video game balloon, but he has been in some great games. Also, I feel bad for the folks who wanted to see him in Smash Bros., so this is my slight nod to the Saiyan fighter. It's not often Goku is lauded in a grand American spectacle, especially at an event that even Mario has never appeared in, so we're going to highlight this small win for anime's most well-known himbo.

Goku didn't appear in the heyday of Dragon Ball Z, nor is he in his iconic Super Saiyan form. His first time entering the parade was in 2018 to promote the newest iteration of the series he hails from, Dragon Ball Super. Adorned with blue hair, this is, of course, Goku in his Super Saiyan God Super Saiyan form, also known as Super Saiyan Blue. Surprisingly, his appearance wasn't just a one-off, having appeared in the Macy's event in 2019 and is returning for 2021. 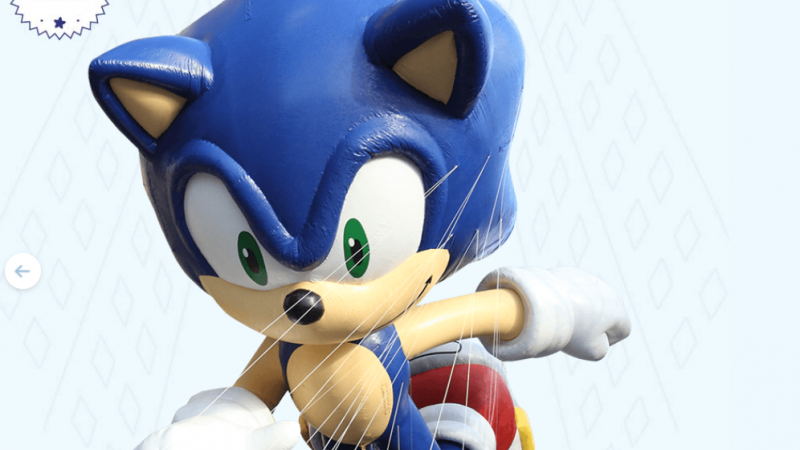 Now, this is a Sonic. Look at those lanky limbs, that cool mid-run pose, friendly smirk, and a thumbs up... thumb pointing at... I don't really know what that thumb is doing. Taking inspiration from the modern Sonic design, which debuted on the Dreamcast, this balloon is begging to fly through the city streets like the end of Sonic Adventure. Only without all of the flooding and destruction. Although, it would be cooler if this were Super Sonic instead. Minor point deductions there, I guess.

This Sonic was brought out of retirement after spending seven years off the parade route, and will fly again this year in honor of the franchise's 30th anniversary. Points reinstated for making it this long, my spikey azure friend. 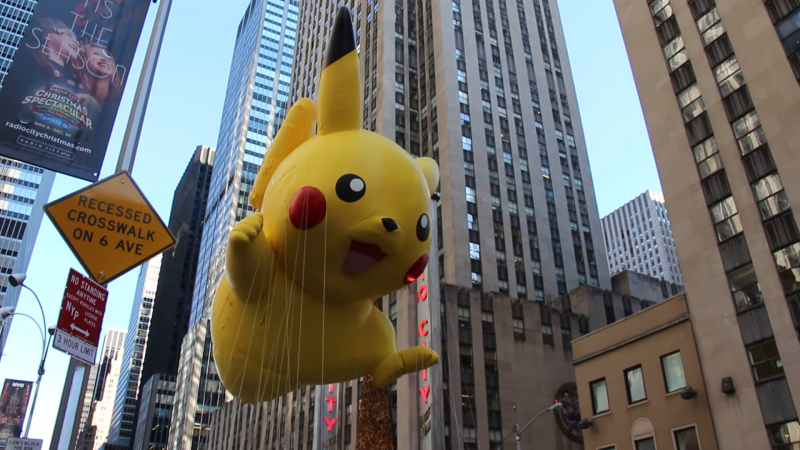 The simplicity of this Pikachu balloon is key. It's huge, cute, playful, and most importantly, recognizable from blocks away. Out of the now four different Pikachu balloons, this has to be the best. It's the character in its purest form and has light-up cheeks. In the early years of its run, this balloon was paired with a large Pokéball floating out in front of it, making the overall presentation even better. I don't know what else to say. This is hands down my favorite of the character balloons. Let's hope someone is brave enough to top it one day.