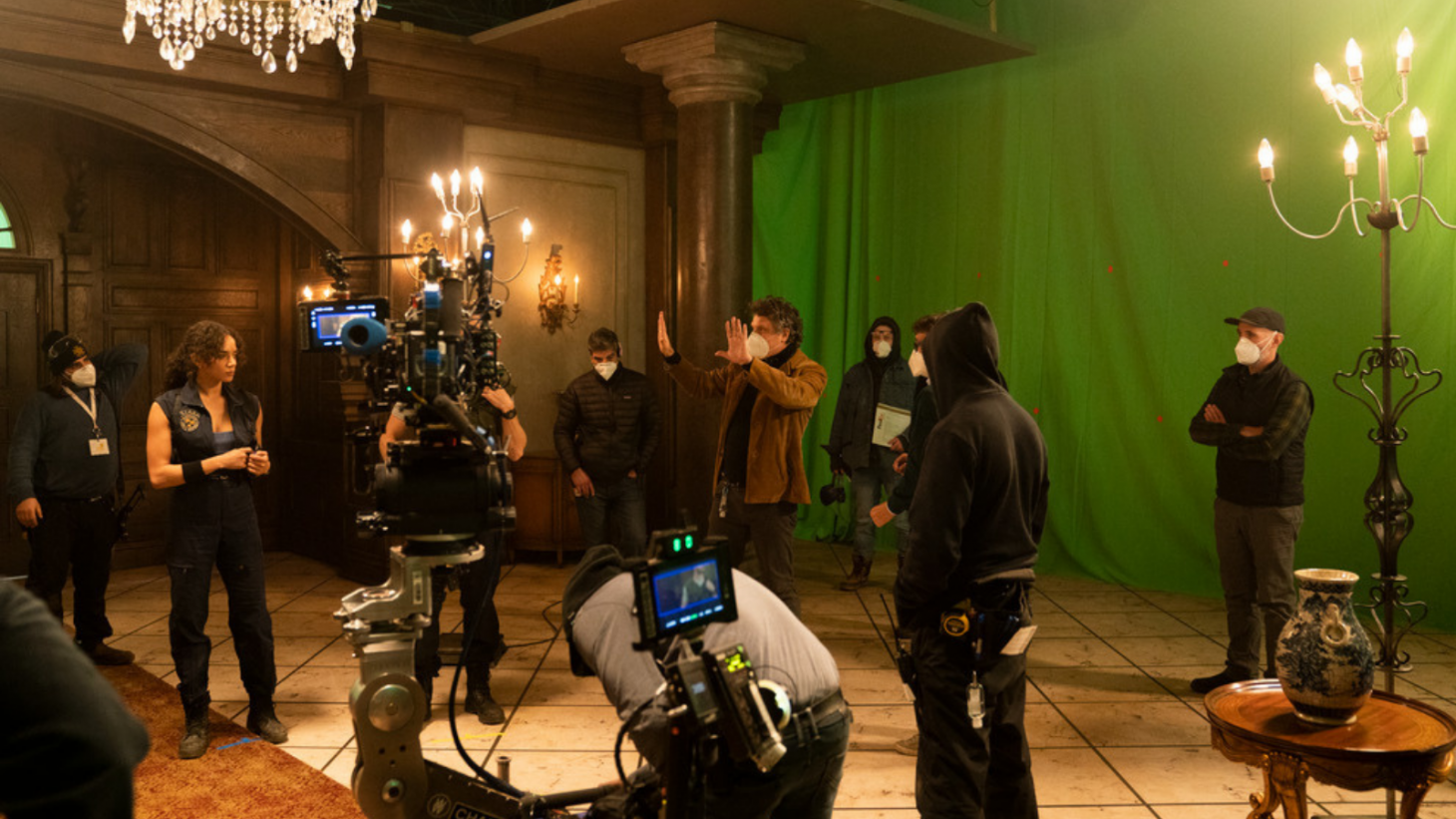 After the first series of Resident Evil movies made over a billion dollars in box office revenue, production company Constantine Films is ready to reboot its biggest film franchise. But where the original series deviated drastically from the source material, new director Johannes Roberts – known for his work on 47 Meters Down and The Strangers: Prey At Night – wants to do right by Capcom's original games with his new film, Resident Evil: Welcome To Raccoon City. We caught up with Roberts, to ask what it's been like bringing the first two games to life.

Game Informer: What is your relationship with the Resident Evil series?

Johannes Roberts: I sort of came into the game franchise as a watcher of it, rather than a player. The game was just such a huge thing. It was really the first time that you had something that was cinematic and scary. I've always been a horror nut and [a] horror cinema nut. It was so funny to see this thing that was so totally in love with the same things that I was in love with. I used to just watch people play it [laughs]. I'd just be obsessed with it. The techniques, the horror techniques they were using, it was just so wonderfully scary.

GI: The reason I'm asking, those first games, the camera angles are born out of technical limitations, but they were very cinematic. You've directed multiple horror films at this point. Would you say there was any specific influence on your movies from Resident Evil?

JR: Two things have sort of run through my career making horror. One, it's all about going through doors. I made a movie called Outside of the Door. This kind of thing of, "What's on the other side of the door," and you would open this door, and you wouldn't know what you were going to get into. [Resident Evil games] really sort of played heavy on that – and obviously through technical limitations, because everything would have to load into the next beat. But it really built a suspense there. And then also this thing that we definitely used in the movie, but I've definitely used a lot anyhow, is this thing of characters going off-screen and not following with them [laughs]. It's a really weird thing. I obviously went back and played those games when I started rebooting this movie, and it's such a weird – now we're in so much of a world where you are the character, and you move through the character and stuff. To have this weird thing where you just disappear off-screen, and you don't really know what's around a corner, it's such a strange and actually quite frightening thing.

GI: Can you talk about the collaboration between the cinematographer Maxime Alexandre and yourself in staging shots that are both an homage to the games and adapting them for something that works in live-action?

JR: What we did, where we took heavily from the games, was very much in terms of the locations and the look. I very much drew on the John Carpenter world. It's very retro. So, there's a lot of zoom lenses, a lot of long takes. It has a really '70s feel to it. I quite often would use movies like The Parallax View, Invasions of the Body Snatchers, Don't Look Now, Jewel. I love the cinematography in Jewel. We would use a lot of these cornerstones of '70s cinema – The Exorcist and stuff – and use that as my language to work within the game franchise.

GI: I can definitely say I haven't heard anyone bring up Don't Look Now when talking about their video game adaptation.

JR: [laughs] Yes, yeah. We're just at this stage of finishing the movie now, and we're going into the color timing of it all. It's really fun, the idea of bringing out these really vibrant reds in a way that you would in a Dario Argento movie or something like Don't Look Now, which has that sort of red theme going through it. I'm very influenced by '70s cinema, and in this movie in particular because it felt like a sort of '70s conspiracy thriller in some of the themes that we were using.

GI: Especially in those first few Resident Evil games, I feel like people forget about the messages of eco-terror and abuses of power. They're weirdly political games for how goofy they can be. When you were writing it, especially considering where we are in 2021, were you thinking about those themes?

JR: We all had very different film tastes, but we had key things that sort of drew us together. One of the big things was the love of [the] '70s conspiracy thriller movie that really is at the heart of this movie. There's a couple of really great pieces of filmmaking that came out [around] the time. Chernobyl, the TV series, I remember watching it, and all of us came into the office, and we were just talking about how unbelievably good it was – the storytelling, the themes, the cover-up. How scary it was by being so normal and just the terrifying nature of what happens to people with radiation sickness. So, we would talk a lot about these kind of cover-ups, and all the themes that Resident Evil was built on. We would look at movies like Dark Water, the Mark Ruffalo movie, and just look at things that were happening in America, like the Flint water crisis and all that kind of stuff.

GI: What's it been like adapting some of those locations for a live-action movie?

What I felt hadn't really been done before in-game adaptations is to treat the source material with the respect that you would treat a novel. And that was my real guiding principle. You know, we're telling our own story, but let's treat this world with real respect and work within the lore and the locations and the world of Resident Evil, the games. So we went to Capcom, and we got blueprints – like architectural blueprints – of the mansion, of the police station. So, the build of these things is identical to the game. It was incredible walking around these sets and going, "I'm f---ing in the mansion now. I'm actually walking around this game I've been playing for 25 years [laughs]." That was so cool. And then to have fun taking sequences and doing it for the first time on [film], like the iconic turnaround zombie from the first game, the first time you see the zombie. You know, it's like that big moment that really had never been done before in computer games. Putting that onscreen was just – I remember one of the producers coming up to me and just saying they got shivers down their spine because it's just so cool to do that.

GI: What stands out to you as the most challenging part of making this movie?

Do you know what? The biggest challenge and, I guess most frightened I have ever been when doing this, was the zombie aspect – and I've never really realized it until we were doing the siege on the police station. The movie is very much influenced by Assault on Precinct 13 and uses that a lot as a touchstone to tell the narrative. We have this big siege at the police station. Suddenly, I was standing there, and the zombies all arrived, and suddenly you realize you have the weight of, like, 60 years of zombie movies on you. You've gotta get this s--t right, and you've gotta bring something fresh, and you've gotta scare again. When people have seen zombies – you know, they found them scary, then they found them not scary again, they've become part of comedy. They've become everything. That was really tough to be able to create a story that had a dramatic theme and was grounded to a certain extent. I mean, it's very John Carpenter-influenced, so it has its own world. But within that world, you needed to be believable within the reality of that world and to scare people again and make them really fear the zombies and the whole armada of creatures that we let loose. So, that was very frightening. I remember that day super closely. I remember feeling, "Oh my God, if I f--k this up, I'm in real trouble. People are going to kill me." The weight of that was huge. It was huge.

Resident Evil: Welcome to Raccoon City is in theaters now