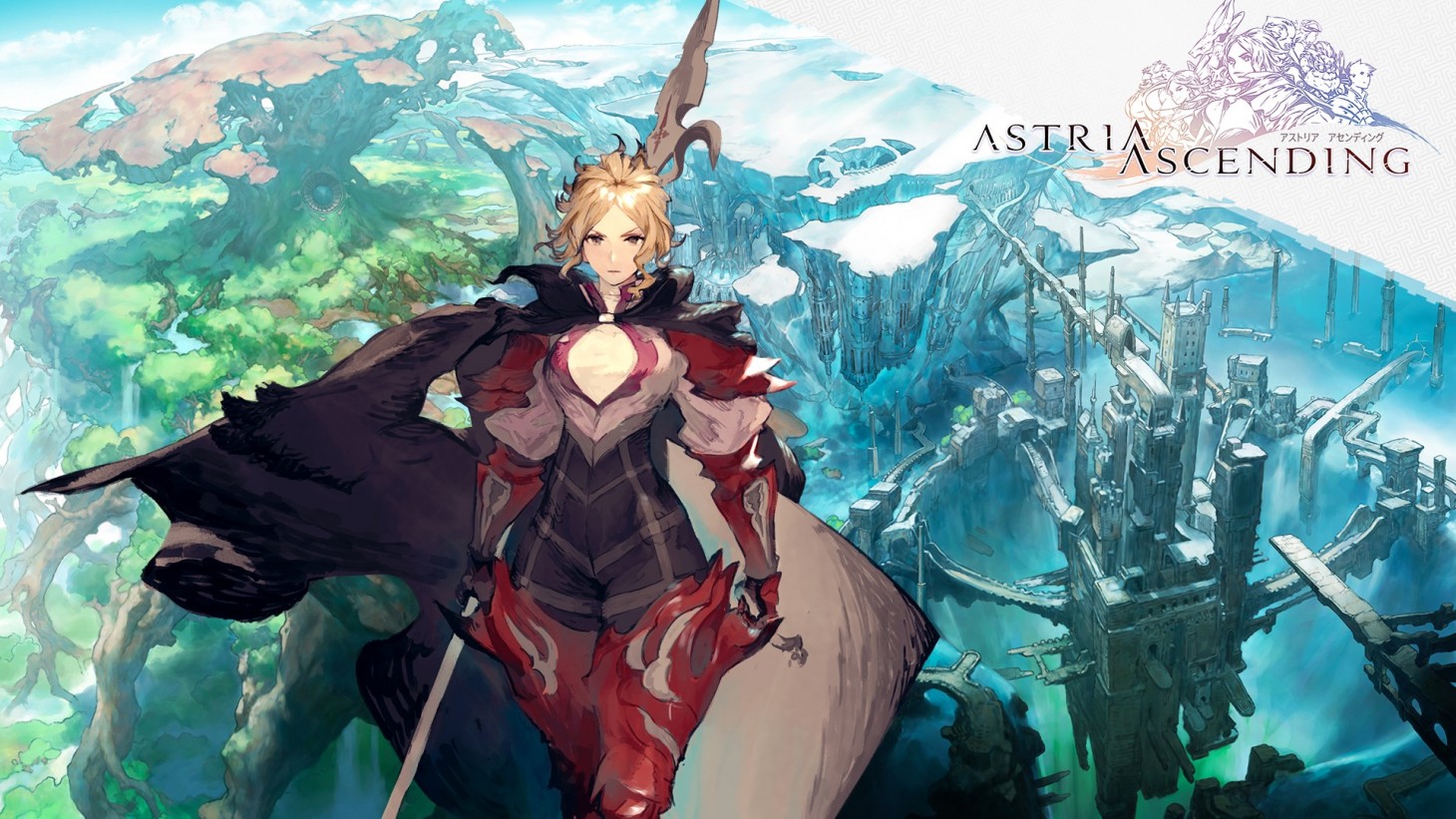 What would happen if a budding indie company, known for vibrant 2D JRPGs, partnered with esteemed Square Enix designers? We’re talking Kazushige Nojima (FFVII/Remake, FFVII), Hitoshi Sakimoto (FFXII, Vagrant Story), Hideo Minaba (FFVI, FFIX, FFXII), and Akihiko Yoshida (FFXII, Nier: Automata). You’d get Astria Ascending – a visual feast on the one hand and a smorgasbord of flavorless mechanics on the other. I spent several hours sampling the game’s assortment of features and was dissatisfied with the overall experience. Developer Artisan Studios’ sophomore effort (it also shipped Super Neptunia RPG in 2018) shows bouts of promise, but its stale story and gameplay left a bad taste in my mouth.

Puzzles are insultingly easy. In the first dungeon, I activated four murals to open a gated doorway, but I didn’t solve the mural order on my own merits; how could I when a nearby pillar etched with an on-the-nose riddle spelled out the answer? At the time, I couldn’t know this would foreshadow much of the game’s unimaginative level design and environmental storytelling. Similarly, leaping over bottomless chasms to arrive at varying points of interest got boring quickly because there are no consequences for dying outside of battle scenarios. This begs the question: why have these hazards scattered throughout the game world in the first place?

The turn-based combat amounts to rotating four party members (out of eight) as you utilize a range of physical and magic-infused attacks. This allows you to take advantage of elemental weaknesses, inflict debuffs/devastating status effects, and amass focus points (FP) to enhance the effectiveness of a selected ability. I enjoyed collecting FP and combining them with my most potent magics, but this formula ran its course after the first few battles. The Ascension Tree is where you’ll spend your experience (SP) to enhance stats or acquire new skills. Each upgrade truly feels like a critical customization choice. I loved boosting my thief’s evasion properties so he was more elusive, but at the same time, his accuracy and luck numbers weren’t as high. Throw in four possible “jobs” (or classes/roles) with specific unlockables for each playable character, and you can create a squad that’s ready for any engagement … or so I thought.

Sudden difficulty spikes are incredibly punishing and create awkward lulls in campaign progress. At one point, I came across a boss with four grunts that felt almost impossible to beat. That one boss cast “stun” and “confuse” on everyone, immobilizing and turning them against one another, healed its allies for more than double the damage I was dishing out, and even respawned its downed minions. I immediately knew that I’d have to grind to overcome this obstacle, but that required me to leave the dungeon entirely to repopulate the small number of wandering enemies. Doing this over and over again drove me up the wall.

I tended to avoid subquests because some areas weren’t accessible yet, and most objectives required me to kill punishing monsters or collect miscellaneous materials for forgettable NPCs. A mini-game called J-Ster kept me preoccupied when grinding became exhausting (we all know how much I love tabletop side activities). J-Ster is vaguely similar to the Japanese strategy game Go in that you place five tokens on a board and use their power levels/positions to capture the opponent’s tokens. It took a while to grasp the rules, but once I did, I was happy to sit back and take on a bevy of different challengers when the lackluster plot wore thin.

Astria Ascending explores destiny vs. fate and hate vs. love (among a bevy of other traditional JRPG motifs) which makes sense since the primary setting, Orcanon, is a continent divided. Five races – the feathered Awisi, amphibious Peyska, bestial Arktans, reptilian Zefts, and humanoid Meryo – flourish in their own realms but have trouble mingling and living within proximity to one another. Your crew of mighty misfits, the demi-gods, symbolize the best warriors/mages that each race has to offer. Blessed with immense powers, the heroes spend their brief lifetimes (three years!) preserving harmony and vanquishing “Noises,” grotesque creatures that call the wilderness home.

Astria Ascending establishes its narrative stakes and extensive lore from the get-go, and I’d be lying if I said I wasn’t immediately fascinated. However, the eight characters with which you embark on this Noise-slaying journey are one-dimensional archetypes. For instance, Uhlan, the flaxen, shield-bearing leader of the troupe, is a “cordial young woman who would like everyone to get along” – an apt description found in your journal because, outside of this observation, I can’t recall any other details about her personality or motivations. The youthful Peyska, Eko, has some redeeming qualities; he faces constant scrutiny and is subject to tasteless jokes from his companions during the game’s early hours. Beyond his role as the pitiful underdog, he (and the rest of the team) failed to live up to the Final Fantasy ensembles that inspired them.

Jarring realizations like this are commonplace and so disappointing because Astria Ascending is one of the best-looking 2D titles of the year. Meticulously hand-drawn characters and metropolises make up for the lack of interactivity and character dynamism. Additionally, the polished animations are incredible. Every stylish hair flick and mouth-covering giggle valiantly attempt to personalize/characterize the numerous fighters in your party, but there’s not enough substance to keep most players hooked.

If you can’t stand the English voice acting – don’t worry, I empathize with you – try playing with the Japanese VO. This doesn’t remedy the painful dialogue, but at least the deliveries are much stronger! 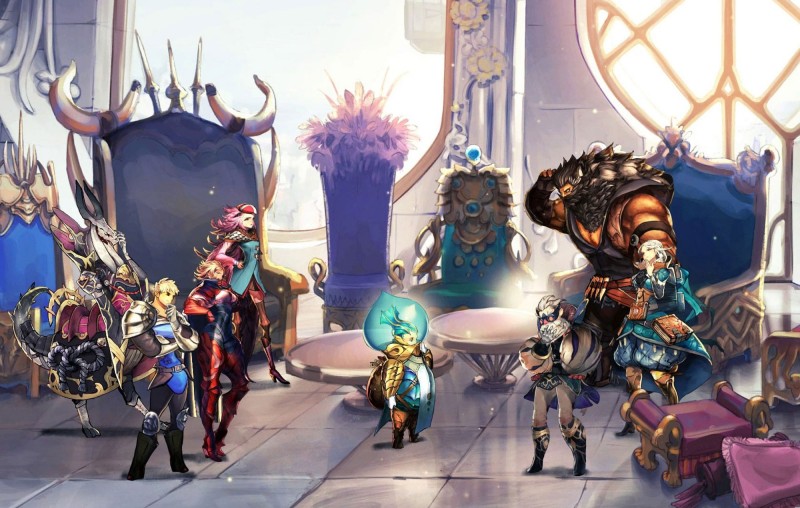 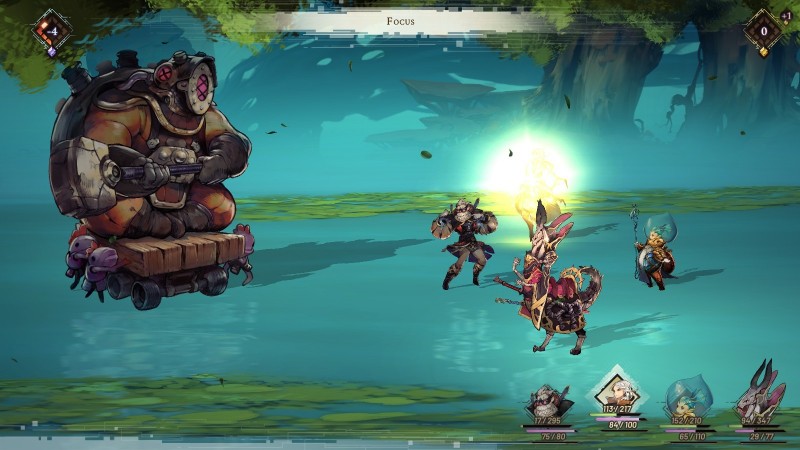 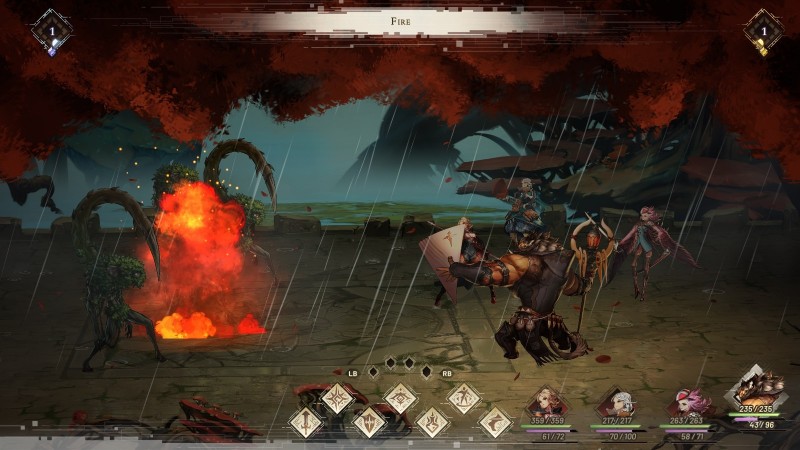 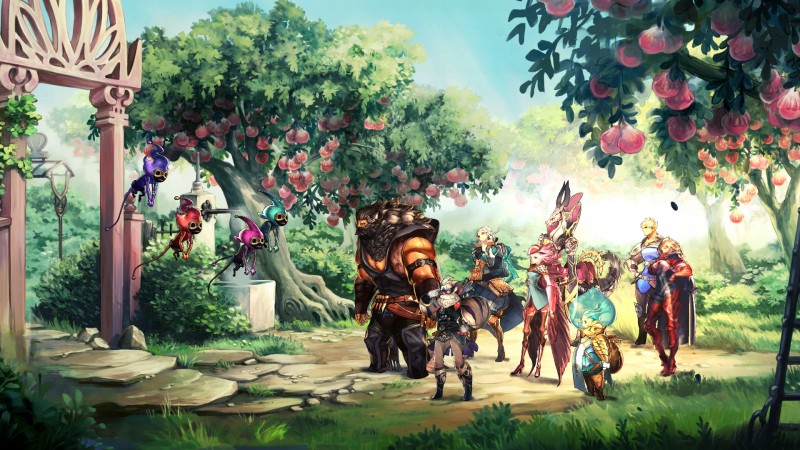 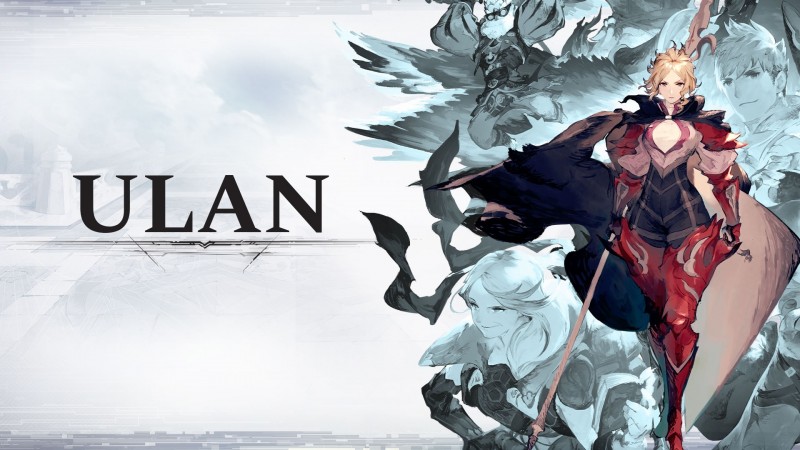 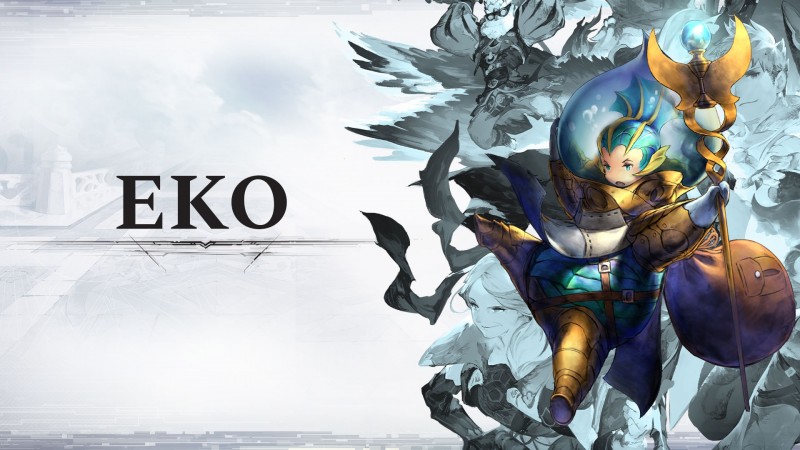 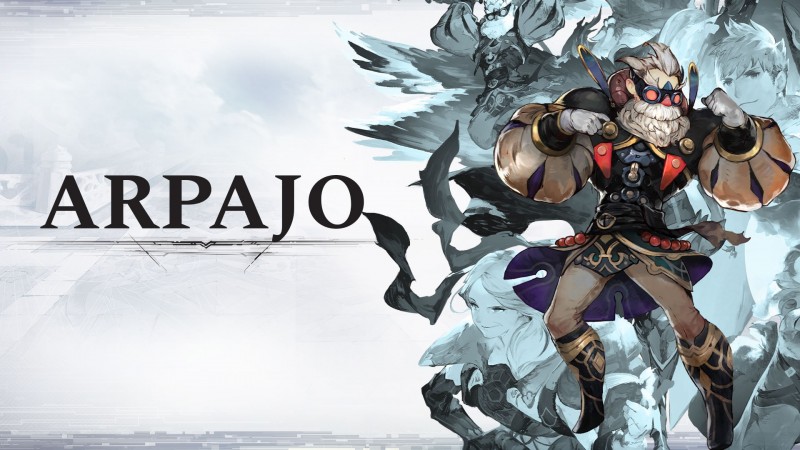 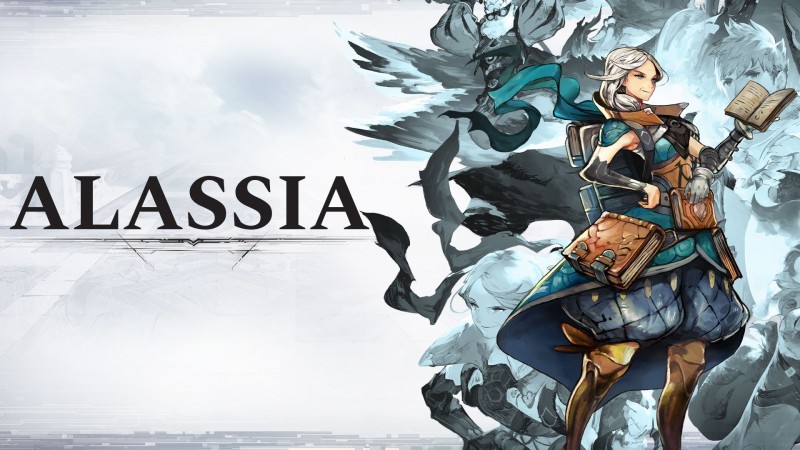 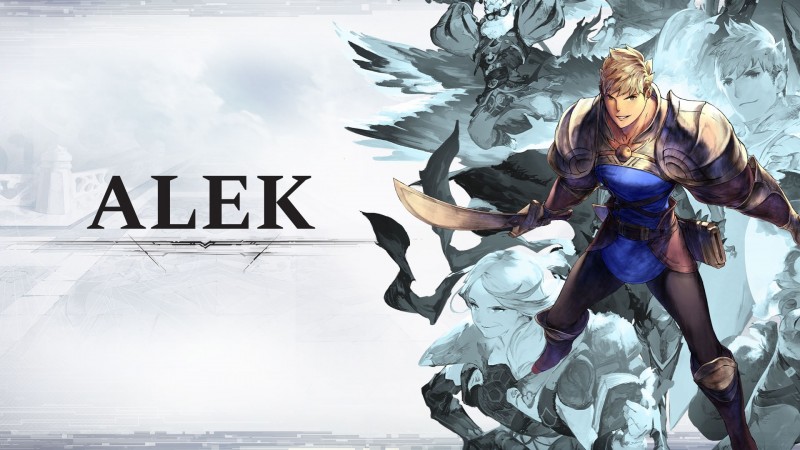 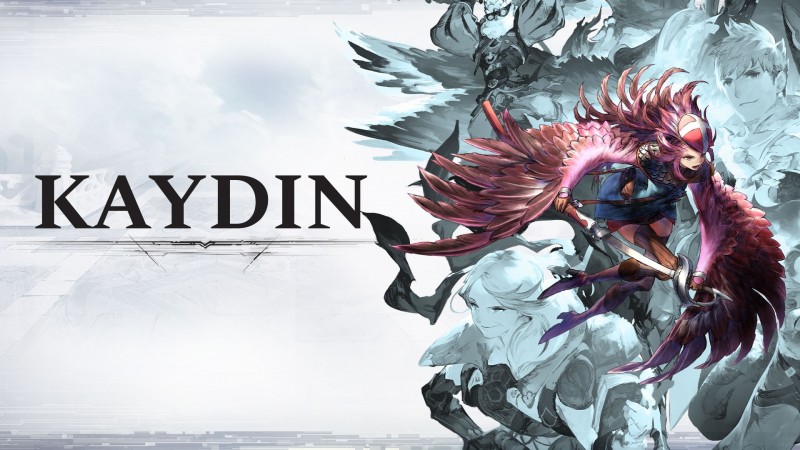 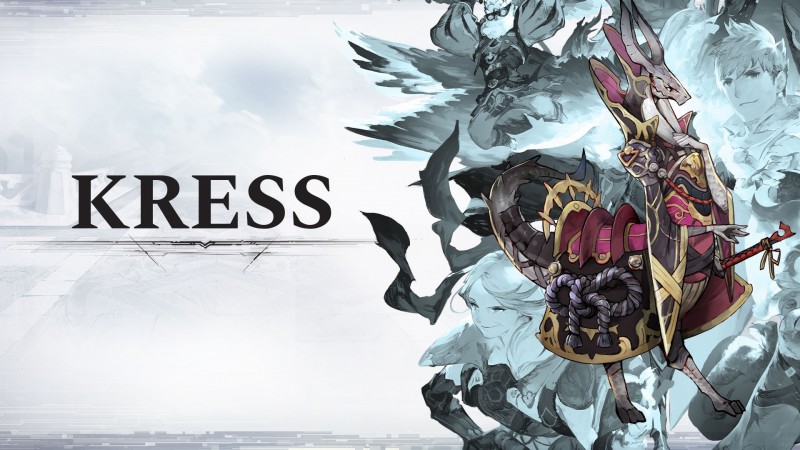 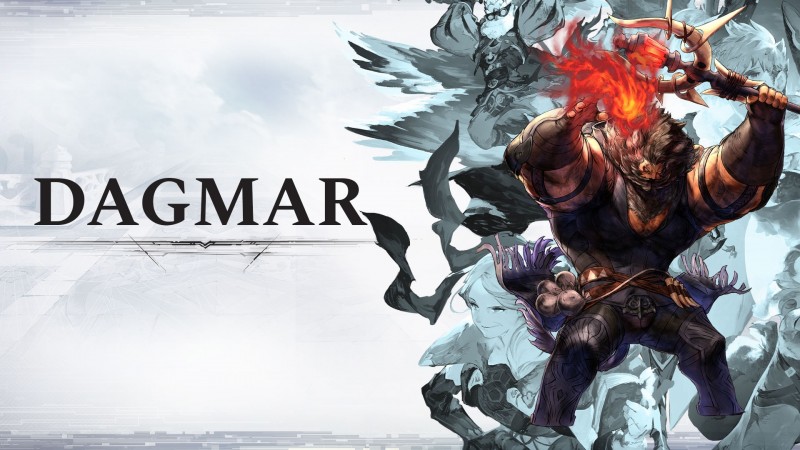 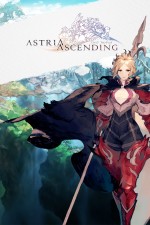