Jackbox Party Pack 8 arrives October 14, giving fans a new batch of goofy party games just in time for all of those Halloween parties. The game is coming to PlayStation and Xbox consoles as well as Switch and PC.

So what’s new in Party Pack 8? Five games, that’s what! You can check them out in the trailer above, but, in terms of returning favorites, there’s Drawful: Animate, a new spin on the beloved Pictionary-style game that now allows 3-10 players to create animated gifs.

The Poll Mine is billed as the series’ first competitive team game. 2-10 players are trapped in a mine and the only way to escape is to correctly rank survey answers from your group.

The Wheel of Enormous Proportions is a trivia game with 4-8 players answering questions dictated by spinning the titular giant wheel.

Lastly, there’s Weapons Drawn which is Jackbox’s take on a deception-style game. You must solve murders committed by your friends while also drawing weapons to commit your own killings. It supports 4-8 players.

As per the series, Jackbox Party Pack 8 can be played by visiting Jackbox.tv in your browser, traditionally using your phone. On top of having your friends, up to 10,000 audience members can watch and participate in certain games to help sway the outcomes.

How do you think Jackbox Party Pack 8 will stack up compared to previous collections? What game in the pack excites you the most? Share your thoughts in the comments! 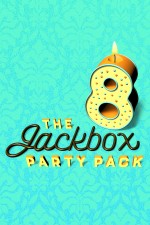