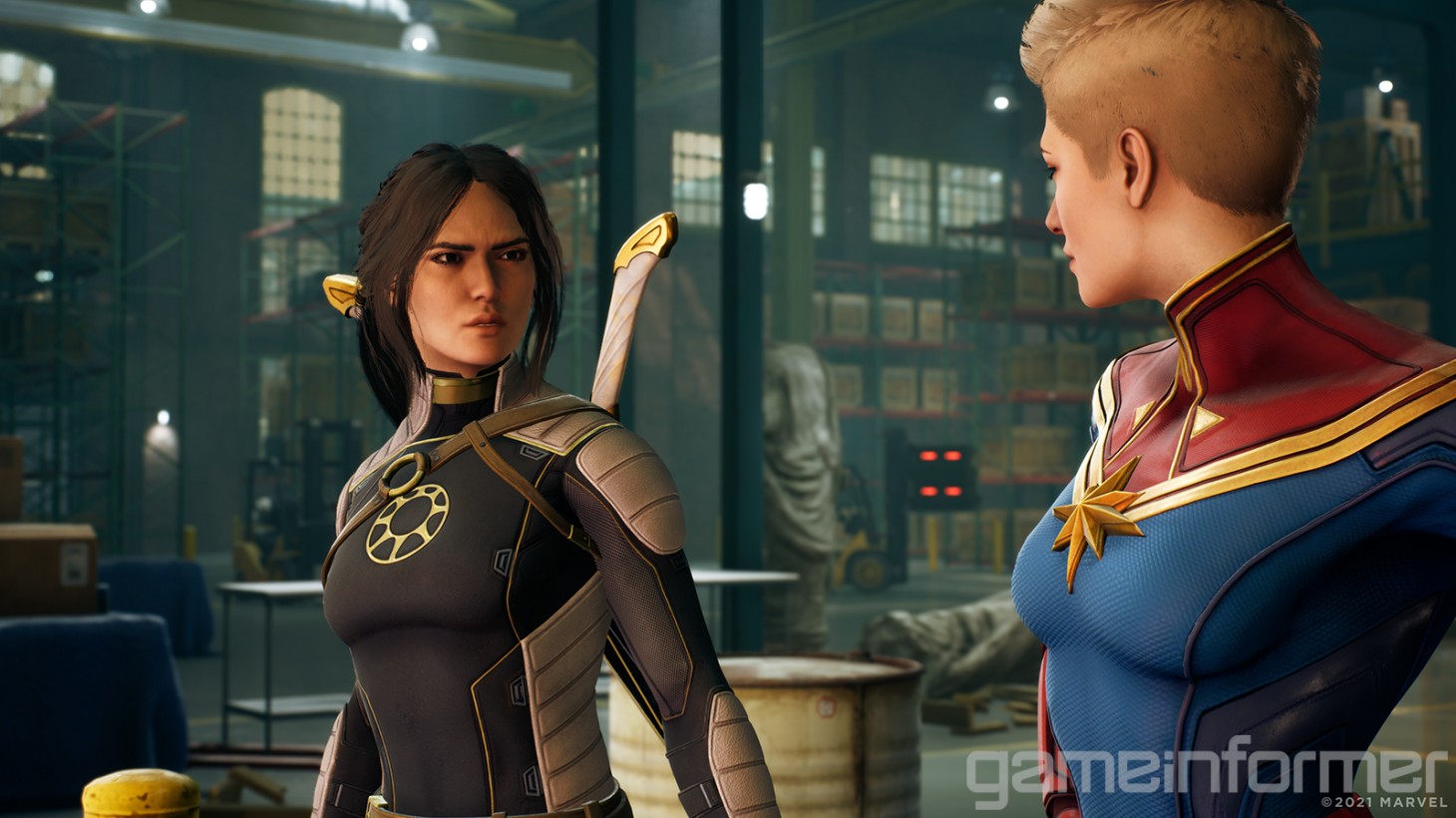 Who Is The Hunter In Marvel's Midnight Suns?

Marvel's Midnight Suns brings together disparate members of the Marvel Universe into a supernatural adventure. This quest to save the world features Iron Man, Captain America, Captain Marvel, Wolverine, Blade, Doctor Strange, and Ghost Rider, plus a few lesser-known heroes like Magik and Nico Minoru. However, players see this icon-riddled adventure through the eyes of The Hunter, an all-new hero designed by Firaxis in collaboration with Marvel.

Working with Marvel to create a brand new hero was a dream come true for the Firaxis Games team, but they needed to make sure The Hunter could stand up next to the other iconic characters in the Marvel Universe. "There's a specific way that Marvel heroes become heroes, and there's a specific way that Marvel villains become villains," creative director Jake Solomon says. "You can't just wave a wand and say, 'Oh cool. The Hunter exists now.' We had to think about what is the backstory, why do they have meaning in this setting, why would all these characters with all these powers [recruit] them to potentially lead them in this fight? If we make them central, it has to be authentic to this story and why the other heroes would look to The Hunter as an equal."

From Marvel's perspective, there had to be a good narrative reason for introducing this new hero. "Everything of this experience revolves around The Hunter and you playing as The Hunter and the choices you make; that is crucial to authentic Marvel stories," vice president of creative at Marvel Bill Rosemann says. "Every Marvel story has to connect to the main protagonist. You can't take one hero out and put another hero in the story. It shouldn't work. Every story should be very personal to the hero ... In this story, The Hunter is at the center. Everything is connected – all these characters, all of the story is connected back to you, The Hunter."

The Hunter (who can be male or female) is the child of Lilith, the main antagonist that Hydra awakens at the start of the game. The mystical members of the Midnight Suns band together with Iron Man, Captain Marvel, and Captain America but realize they still need help if they hope to stand a chance against Lilith and her forces. They learn about The Hunter, who defeated Lilith centuries ago before laying to rest. Due to The Hunter's lineage as Lilith's child, they're the only ones powerful enough to stop the Mother of Demons.

The team of heroes travels to the Abbey, an old monastery that exists in a pocket dimension. It's the final haven from Lilith's reach. There, they use their combined magic to awaken The Hunter and recruit them to their team. If you saw the announcement trailer for Marvel's Midnight Suns (above), you saw a cutscene of the awakening ritual. With The Hunter back and caught up on what's happening, the team sets out to halt the dark prophecy once again.

Unfortunately, The Hunter's memory has not survived the centuries of hibernation, so they don't remember exactly how they once stopped Lilith. All they know is they must balance the Light and Dark energy within them and that their connection with Lilith presents the danger of putting The Hunter at odds with the rest of the team of heroes. Despite this innate caution shown by the rest of the heroes, the team puts their trust in The Hunter and sets out to give Lilith and her forces all they've got. 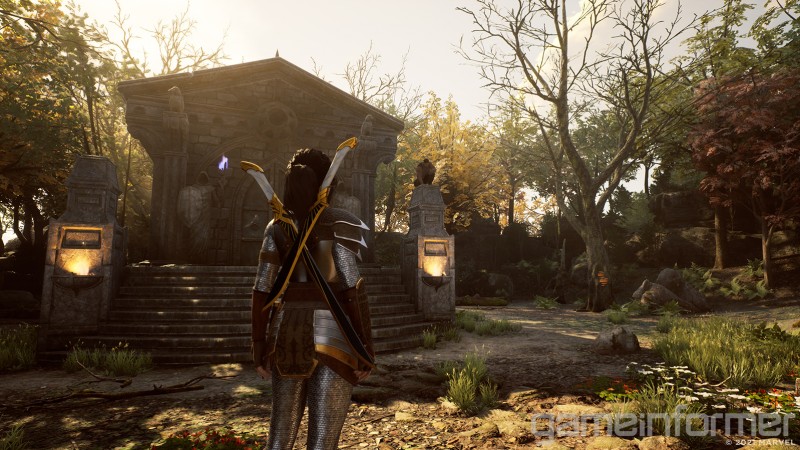 The Hunter is the first customizable hero in the Marvel Universe. Players choose gender and skin tone, then later equip different gear to complete the desired look. Not only that, but players can also customize the move set and relationships of their Hunter. While in the Abbey, players can wander the halls and interact with the other heroes crashing in the mansion. "In any given day in the Abbey, you're going to run into heroes who want to have a conversation, maybe about something serious, maybe not," Soloman says. "You're going to have the ability to hang out with these heroes. You're going to have the ability to perform quests for these heroes. Hopefully, the Abbey feels like a living space – like your dream of what a superhero headquarters can be."

Just as they must balance their Light and Dark energies, The Hunter can harness these opposing powers in combat. Dialogue and actions around the Abbey contribute to The Hunter's alignment. You can shift your balance to be a Light Hunter, Dark Hunter, or somewhere in between. The Hunter is always a force of good, but a Dark Hunter is more of an antihero, while a Light Hunter is a more virtuous, traditional hero. These shifts are more than cosmetic, as your alignment helps determine which abilities The Hunter has access to. Dark abilities are generally for dealing damage (at the cost of something like your health or your allies' speed). In contrast, Light abilities are generally more about buffing and healing your party, letting you choose if you want your party leader to focus more on offense or defense. 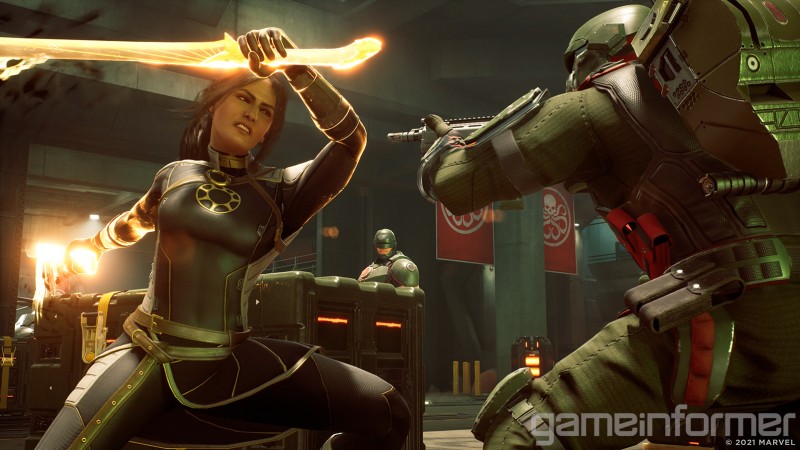 Using the unique battle system developed by Firaxis, players control The Hunter and a party of other heroes to fight the forces of Lilith, including corrupted versions of iconic heroes and villains. In my hands-on time, The Hunter displayed powerful abilities like grabbing enemies with a whip and slamming them into environmental objects or casting a heal to nearby allies. Iron Man and Captain Marvel may be more familiar to the masses, but based on my time with the game, The Hunter is a formidable combatant and a beyond valuable asset to the Midnight Suns.

Marvel's Midnight Suns launches on PlayStation 5, Xbox Series X/S, PlayStation 4, Xbox One, Switch, and PC in March. For more on this upcoming strategy-RPG from Firaxis Games, click on the banner below to access our hub of exclusive content, or check out the current issue of Game Informer to read our in-depth cover story!