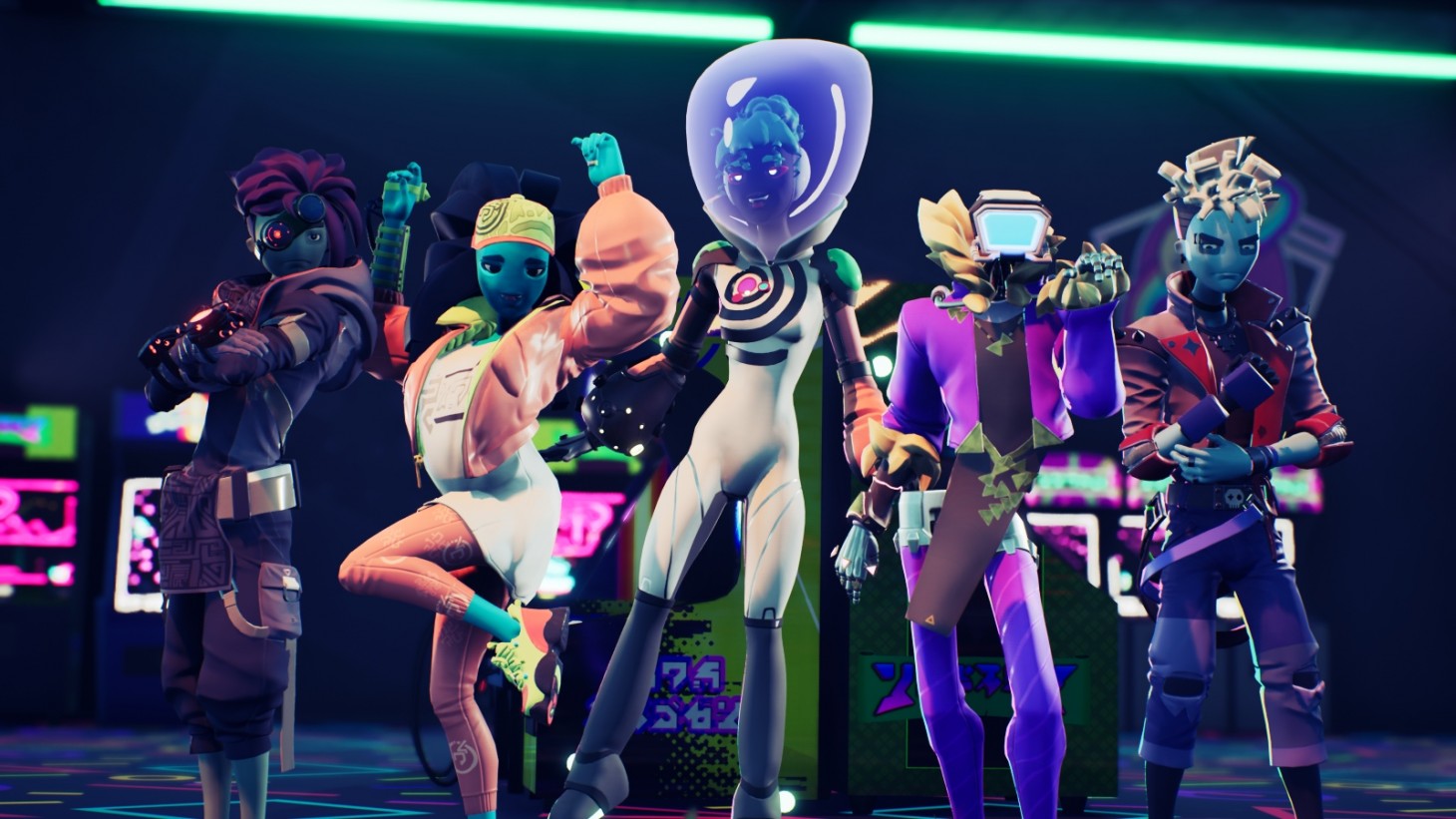 If Arcadegeddon were an animal (roll with me here), it'd be a hip-hop banging phoenix rising from the ashes of a near disaster. After releasing Friday: The 13th and Predator: Hunting Grounds, developer IllFonic moved on to a new licensed multiplayer project that, unfortunately, was cancelled while deep in development – the day after last year's Christmas, no less.

"I'm pretty sure I was looking in the mirror … and I was like 'Oh s***,'" says IllFonic Art Director Izaak Moody while discussing the cancelation.

It was a major blow, but IllFonic's creative head, Jarred Gerritzen, saw an opportunity to turn tragedy into triumph. He hunkered down in the solitary of quarantine and concocted the concept for a new, original game built upon the framework they'd already created. This new project would incorporate the team's love of electronic hip hop and punk-rock culture as well as employ their multiplayer expertise to form a game they couldn't get enough of playing. With a deadline that didn't change despite the massive directional shift, IllFonic pulled together to create Arcadegeddon, a fresh blend of cooperative and competitive multiplayer that hopes to wow players with its unique gameplay and stylish presentation.

Let's start with the premise. It all begins with Gilly, a lovable arcade owner whose business becomes threatened by Fun Fun Co. Despite the cute name, this ruthless corporation wants to bring Gilly's Arcade down and uses a virus to infect his most beloved arcade game. You and your buddies won't stand to see the last arcade standing go belly up like this, so you decide to take the fight to Fun Fun Co. by zapping into the game to take on the virus.

You'll begin Arcadegeddon by creating your custom character (which can rock over 700 cosmetic combinations), then make your way to Gilly's Arcade. This hot spot serves as the game's primary hub area. From here you can link up with friends, check the global leaderboards, purchase gear, accept gang challenges (more on that later), among other diversions. After a brief tutorial, you're ready to bring the fight to Fun Fun Co.

Gerritzen describes Arcadegeddon as easy enough for anyone to quickly pick up and play but difficult to master, much like the classic arcade games that inspired it. Players battle their way level to level either alone or with up to three friends, blasting apart enemies in third-person combat using a variety of firearms, both conventional and absurd, while completing objectives such as capturing points or destroying designated targets. The game is run-based in that you and your friends have one shot to progress through a world's many levels as far as you can. 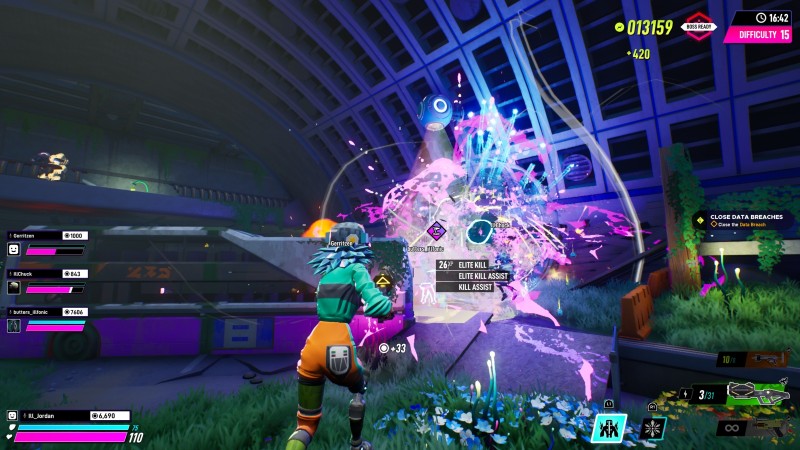 It didn't take long for me to feel at home with Arcadegeddon's combat thanks to its comfortably tight gunplay. Blasting apart gun-toting robots packs a satisfying punch. I also enjoyed the dodge roll, which can be used offensively to plow into enemies and send them flying backwards. On top of this, I got a kick out of using a running slide to trip up enemies or gun them down John Woo-style.

While completing run after run is the name of the game, Arcadegeddon reduces repetition with its procedurally laid out rooms. Levels are randomly rearranged, so while you may recognize a certain area, don't expect to explore it in the same order. As players get further in a run, the difficulty tiers rise organically to perpetually stack the odds. IllFonic wants to continually challenge players, believing that the drive to get better and earn greater rewards is what ultimately keeps them returning to a game over and over.

To that end, the truly skilled/masochistic can also spend coins to increase the challenge themselves by visiting a terminal between rounds. This is a one-way street, though; you can't lower the difficulty, so make sure you and your squad agree on the change. Or jack it up without their consent because you're a greedy jerk. Regardless, the promise of more cash and rarer loot could be worth the effort.

Getting further also fills up a meter that opens a boss battle. When unlocked, players can choose to take on this foe at any time, but losing the fight forces players to earn their way back in all over again. My squad took on Fun Fun Co's CEO, who sicced waves of enemies on us while shielding himself in a protective bubble that we had to shatter before dealing real damage. After a tense, back-and-forth battle, we managed to best the dastardly businessman and were rewarded with high-quality weapons and cash. 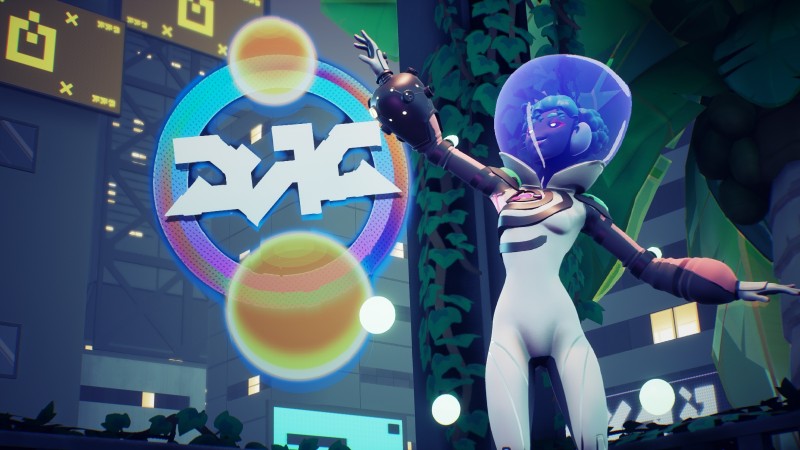 Arcadegeddon blends PvE and PvP elements to allow players to cooperate while simultaneously fighting for top honors. In terms of working together, you can trade weapons and ping objects to notify everyone of, say, the quality loot you found. Capturing an objective point occurs faster when everyone holds down the fort together, further encouraging teamwork. Your overall score reflects the cumulative performance of the group, which appears in dedicated leaderboards for every type of team for single, duos, triples, and quads.

One of the big competitive elements is the scoring at the end of rounds. Individual performances are graded with each player ranked, such as who revived the most allies or scored the most kills. The higher your rank, the more goodies you net for yourself, such as special tickets used to buy new cosmetic items and weapon skins from Gilly. In my time playing multiplayer matches, I found this dynamic creates a friendly sense of competition where my squad worked together for the good of the group, but we also weren't shy about, say, stealing the occasional kill to inflate our own stats.

One of Arcadegeddon's most unique aspects is its competitive minigames. These can be engaged during a run and further break-up the routine with fun, bite-sized challenges that turn friend into foe. One that I played was Glitch Ball, which divided my squad into teams of two fighting to shoot balls into the opponent's goal while slowing each other down with bat and shotgun attacks. Think of it like a futuristic version of Slam Ball, but somehow more ridiculous.

Another minigame is the deathmatch-style Battle Brawl. As the name suggests, it pits teammates against each other plus AI mobs in an every-player-for-themself fight for supremacy. This mode alone can feature various stipulations. For example, one variant gives every player a precision laser cannon, making battlefields resemble the laser grid in Mission: Impossible. Arcadegeddon will feature 30 of these minigames, and emerging victorious means you're treated to powerful weapons. What's great is you're free to give these prizes to other players once you're back into the game, so theoretically, everyone could walk out a winner. 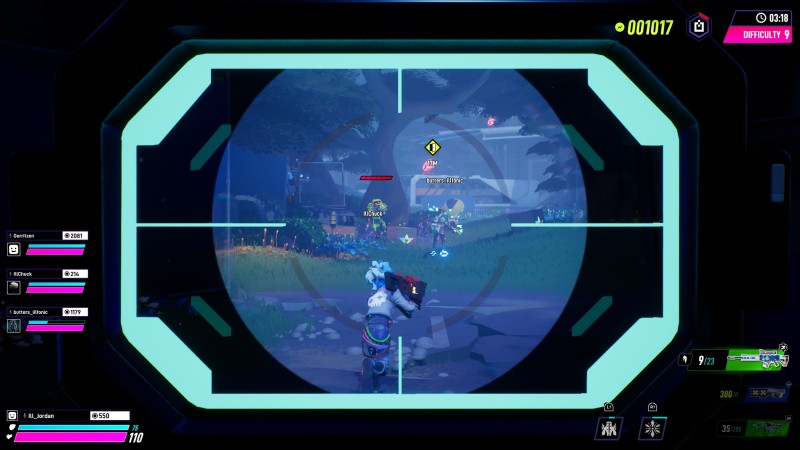 While players can mow down foes using conventional weapons such as shotguns, SMG's, sniper rifles, and the like, Arcadegeddon's zanier weaponry offers more creative methods of defeating enemies. The Pixel Popper can inflate targets with air, causing them to comically swell until exploding and damaging their nearby allies. Another gun fires discs that slice targets in half and ricochet off surfaces. Weapons can also be imbued with elemental effects. In one game, I had an ice-buffed RPG that froze enemies solid, leaving them vulnerable for me to shatter to icy bits with the bat.

On top of the arsenal, players wield special powers called Surge Gauntlet abilities. These powerful attacks come in many forms (I had an explosive fireball, for example) and can help turn the tide during dire situations. These powers operate on a cooldown timer, and you can unlock more by completing challenges for the nine colorful gang leaders hanging out in Gilly's Arcade. These challenges can be as simple as opening a certain number of chests or as challenging as besting a boss or defeating dozens of a specific enemy type.

Furthermore, you can augment your character by collecting Hacks. These usually appear in chests alongside weapons and currency and provide passive stat buffs such as faster ally revival or increased movement speed and you can carry a large number of these at once. Best of all, duplicate enhancements stack their abilities.

At launch, Arcadegeddon will release with three maps, called biomes: Nerve Center, Mystic Isles, and Aftermath. The neon-soaked Nerve City serves as the focal point of Gilly's game as well as the primary target of Fun Fun Co.'s assault. Mystic Isles features temple-laden tropical beaches and would look at home on a vacation postcard. The same can't be said for Aftermath, a war-torn city reclaimed by nature that presents a tonal contrast to the otherwise upbeat tone of the game.

You don't often see multiplayer games place heavy emphasis on music, but it's another area where Arcadegeddon stands out. After all, IllFonic's CEO Charles Brungardt is a Grammy-winning producer with an extensive musical background, primarily in hip hop and electronic trap. Thus, Arcadegeddon boasts a deep soundtrack of futuristic hip-hop beats (some composed by Brungardt himself) as well as licensed music from artists such as Getter, UZ, Thook, Halogenix, Milano, South, and Swrly.

The game's colorful presentation and funky character designs draw stylistic influences from games such as Jet Set Radio and music artists like Gorillaz. When describing the visual look of the cast themselves, Gerritzen says, "They're essentially punk rock Muppets."

Arcadegeddon launches in Early Access on PlayStation 5 and the Epic Games Store today for $19.99. As you can see from the content roadmap above, the team is already hard at work on features such as crossplay, additional maps, new abilities, and more. IllFonic plans to keep Arcadegeddon in Early Access for at least seven months, with the full launch scheduled for 2022. When it does arrive, it will cost $29.99 and will likely be available on other yet-to-be-revealed platforms. 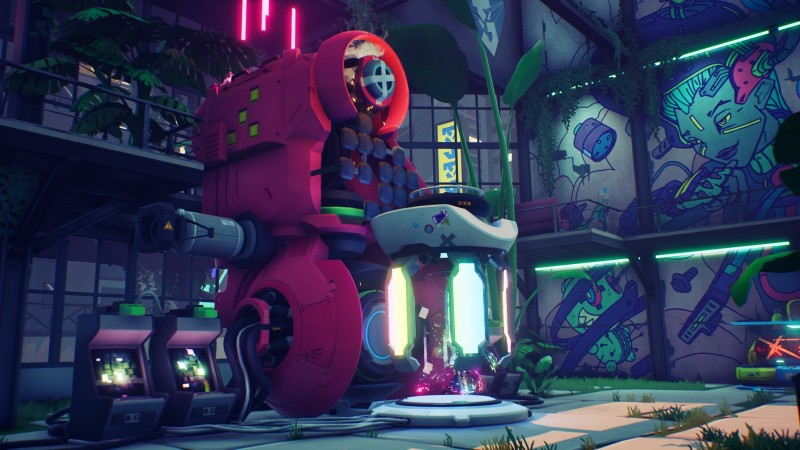 I had a fun time blasting through Arcadegeddon and I'm impressed with what IllFonic has put together given the quick development cycle. The multiplayer shooter market is a historically crowded one and it's hard to stand out, but the team hopes that their unique mix of style and gameplay can attract a sustainable audience. By going into Early Access, the team has a great opportunity to take player feedback and improve the game in real-time to ensure it's exactly what players want once 1.0 rolls around. But even now, IllFonic seems confident that they've made something special.

"This is the first game, truly the first game in the past 20 years that I've developed on, that I still catch myself playing after work," says Gerritzen. "This shooter space is always cramped, but when you put a screenshot with this game, and you say it's a third person shooter, it's X, Y, and Z like all these other games, you can look at and go 'Wow, that looks different. I watched the videos, [and] that plays different. That sounds different. So, I feel like it is one of those things where it'll stand out in this space." 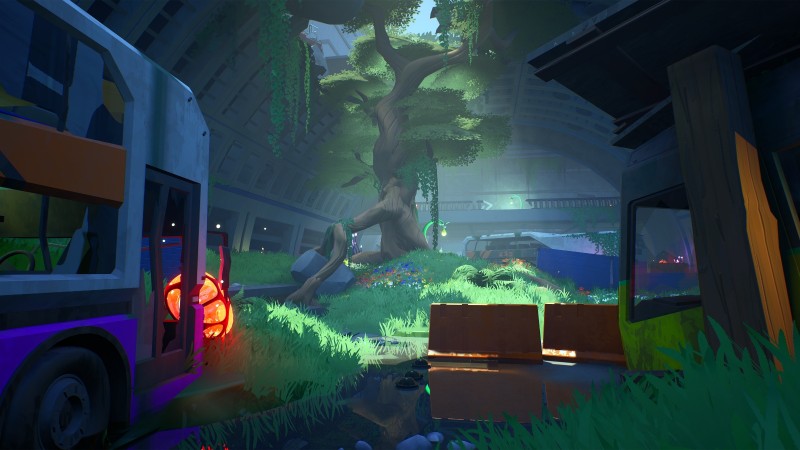 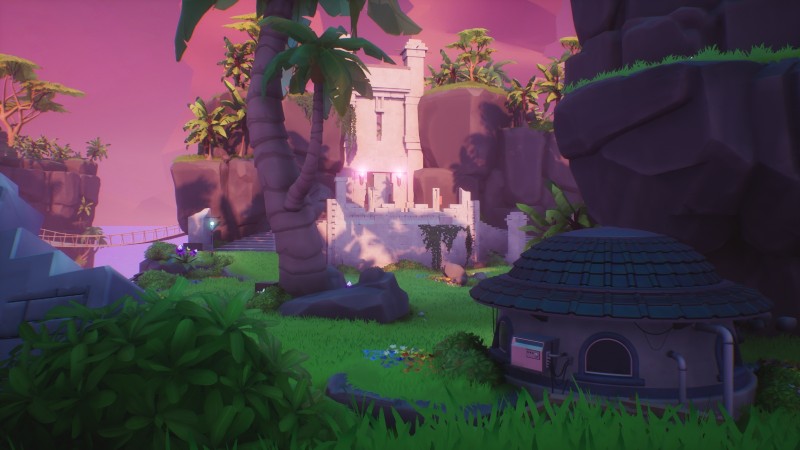 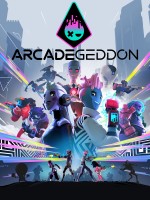