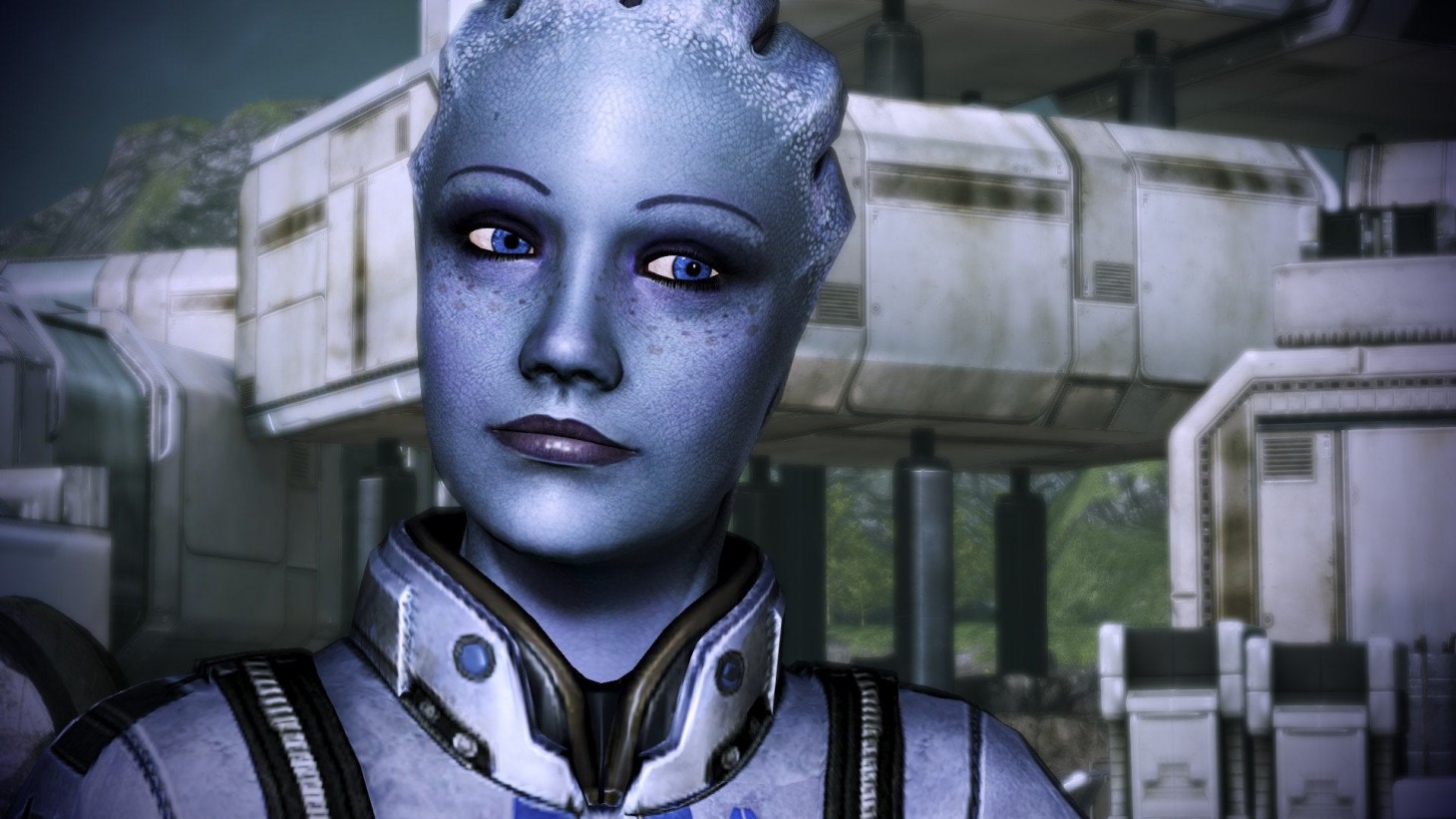 The Mass Effect Legendary Edition is a remaster, not a remake, which means major changes won't be seen when bringing the trilogy into this generation. That being said, tweaks can be felt throughout all three games, including smoother rides in the Mako, better gun mechanics, and a whole lot more. As we've seen in the trailer, BioWare has made adjustments to the graphics of the game, including contrast changes and lighting effects to create a more realistic aesthetic, including that of our favorite blueberry: Liara. While her changes may seem minuscule, they're actually much more meaningful than you might think.

We sat down with environment and character director Kevin Meek to explore why those seemingly minute changes matter and what they mean regarding her coming full circle as a character.

Liara T'Soni is an Asari researcher that we first meet in Mass Effect 1. When we first stumble upon her on the planet Therum, she's excavating a Prothean ruin and triggers a trap that encases her deep within the catacombs. In our first meeting with Liara she's a wide-eyed lover of science and discovery. She's also a bit naive, and that's why many felt so attached to her right off the bat: she was brilliant, kind, adaptable, and, whether romanced or not, was a valued friend. That being said, she goes through a major metamorphosis throughout the trilogy, one that was never really reflected in her demeanor.

In Mass Effect 2, she's not the steadfast companion that she was in the first game because she never fully joins back up on the Normandy in the sequel (though she does return in ME3). She's still fiercely loyal, but you'll notice she's changed. When Commander Shepard reunites with the Asari in the second game, gone is that sweet naivety. Instead, players are faced with a hardened information broker that now apparently says things like "Either pay me or I flay you alive...with my mind." This, of course, references her biotic powers in the trilogy, but it was such a stark contrast when comparing her to the Liara of old.

By the third game, she becomes arguably one of the most powerful people in the galaxy and that thick skin? It really shows. She still has moments of tenderness and she never forsakes her loyalty to her friends, but she's different. Massively different. So how does the remaster pay respect to that evolution in a way that the original trilogy didn't?

When talking about how each character was brought into the remaster, Meek mentioned that the team was very careful not to change how these characters look by augmenting their body styles or outfits of choice, but there were lighting adjustments and graphical tweaks that aimed at bringing these faces to life in more detail. "It would have been really easy to just copy + paste the era from the third game into Mass Effect one, but Liara goes through quite a character arc. In ME1, Liara is just this doe-eyed character wearing her medical uniform or whatever, but by the time she gets to Mass Effect three she's really powerful, confident. You know, the Shadow Broker DLC? That was huge. Because of that, it would have wrong for us to take her Mass Effect 3 face and just slap it on."

He added, "These are the kinds of creative decisions that we had to be mindful of, right, so we're not affecting canon. Sure, people can take a mod and make her look however they want, but we have to live within the rails of what narratively was her art. What might have just been an accident, like people might have just gotten better at making art by the time we got to Mass Effect 3, and obviously the technology leap, so she had a bit more detail and a bit more makeup, or whatever. But those changes, those became canon for her, and we have to hold true to that."

So what's different with her, exactly? The texturization of her face is especially more defined. We saw it for ourselves in the reveal trailer, but that texturization, for her character in particular, makes arguably the biggest impact. That soft, baby-faced exterior stayed throughout the trilogy when it first released with the addition of makeup, but there was nothing outward (other than an armor change) that reflected the metamorphosis. The texture tweak gives her face more life, more reflection of how she takes in the world around her. This makes her evolution throughout all three games feel more natural and more realistic.

Every time I played through the trilogy (which is way more than I'd like to admit), I always thought her arc didn't quite match up with her looks. That's not to say that sweet-looking people can't go HAM in the most beast-mode way possible, but there was no difference in expressions, nothing that showed that impact beyond the lines she was saying. When we change, that change is often reflected outwards: scowls vs. smiles, a sharper glint in the eye, a smirk that's always hidden just beneath the surface, but she never had that. These texture changes, much like with Ashley's tweaks in the first game with the remaster, give her even more life than she had before which is the perfect homage to how strong her character is and what a badass she becomes.

I joked with director Mac Walters and Meek that she went from "Yes, sir, I'll have your daughter home by 11" to "Your daughter calls me mommy now" from the first game to the third game, because she can be ruthless. She's complex and now her art can finally reflect that complexity.

So there you have it! Be sure to look out for the other subtle changes made to create a more immersive experience when the Mass Effect Legendary Edition arrives on May 14. You can check out our other exclusive coverage, including interviews and video, right here with our hub.