Build A Mech Suit And Take On Giant Bugs In Stonefly

Stonefly centers Annika, a young but brilliant inventor who is on a quest to recover her father’s lost mech armor. To do so, Annika will have to do her best Tony Stark impersonation and craft an insect-like suit of armor of her own. Doing so involves gathering materials to craft into parts, which you’ll find scattered through the beautiful, hand-crafted forest. The sense of scale gives a sense that Annika is a small human in a big world, as she walks over street-sized branches and soars over leaves at least twice the size of her mech.  Or maybe she’s a normally proportioned human and the environment is just really, really huge.

Players use their suit to battle a variety of oversized bugs, who are hungry for the same resources you’re trying to collect. Bugs come in all shapes and sizes and boast distinct behaviors and abilities, requiring unique strategies (like pushing them off ledges) to deal with them. Players can also adapt their suit to explore different types of environments and climates, such as cold areas. In addition to story missions, players can engage in exploration-focused side quests and timed challenges. Despite appearing more action-focused in style, Flight School Studio describes Stonefly as being a "chill and tranquil" adventure game. Be sure to check out the cinematic trailer in the header up top as well as the gameplay primer embedded in the story to see the game in action.

Stonefly looks really neat, and while it wasn’t perfect, I enjoyed Creature in the Well enough to want to keep an eye on this one. Look for the game to arrive this summer to PlayStation 5, Xbox Series X, PlayStation 4, Xbox One, Switch, and PC. 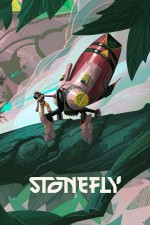