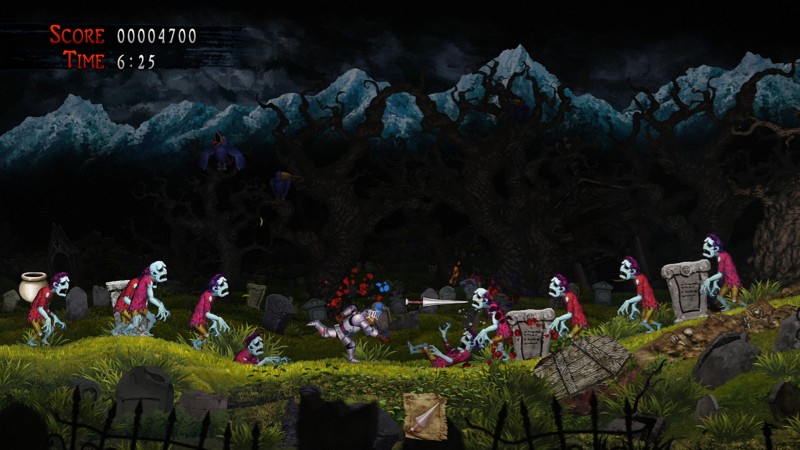 Ghosts ‘n Goblins: Resurrection is out soon, giving fans of Capcom’s tough-as-nails platformer an excuse to suit up again. It’s not a remake of the arcade original, its sequel, or various console ports. Instead, it’s a great homage to those classics, drawing heavily from what made them so memorable while providing an all-new experience. In other words, you’re getting a new experience whether you’re a hardcore fan or someone who’s completely new to the series. On the eve of its release, we spoke with series director Tokuro Fujiwara and chief producer Yoshiaki Hirabayashi about the original games (and their notorious difficulty), what it was like to revisit the series, and what players can expect from Resurrection.

Many of us remember playing Ghosts ‘n Goblins at home on our NES consoles, but it was released a year before in arcades. Arcade games could certainly be mastered, but let’s be honest – those cabinets weren’t installed from a place of charity. If you could design a game that maintained player interest while also threading the needle in terms of difficulty, you could have something that would get players reaching into their pockets after a game over instead of looking around for something else to play. It’s easy to assume that Ghosts ‘n Goblins was designed to drain quarters from players, particularly since it required two complete playthroughs to see the true ending. Fujiwara says that isn’t the case, however. 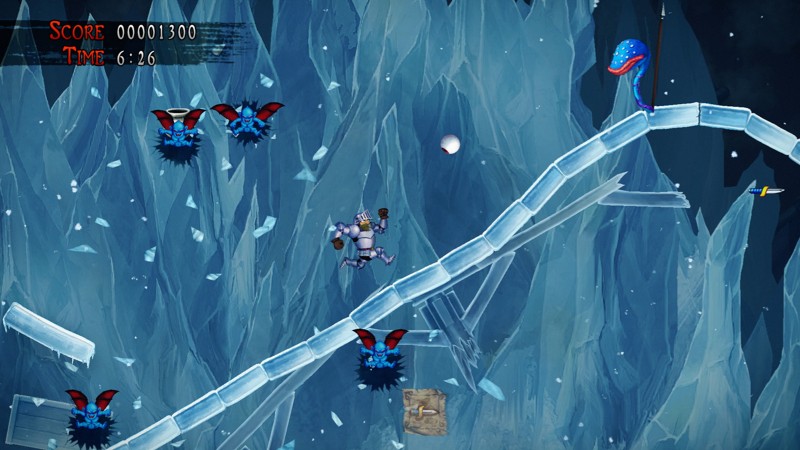 “When developing the original Ghosts ‘n Goblins, I struggled to figure out how players could enjoy this game as an arcade title,” he says. “I never wanted to intentionally make it difficult or give a long journey in the form of a second playthrough just to get players to drop more coins. My aim was to determine how to deliver the sense of accomplishment and satisfaction within the play time from one coin. The 'difficulty' part was merely the end result. Regardless of what generation or platform this is for, I think most people, including myself, feel that a challenge that leads to a sense of accomplishment is fun and worth taking on.”

When Capcom ported the game to the NES, they didn’t hold back, either. “I think most people believe the arcade and NES versions have the same difficulty, but in reality, they are different,” Fujiwara says. “The arcade version had a reputation for being difficult, but there was a demand to make the NES version even harder since it was thought the game would be too easy for those who already played it at the arcade. We thought, ‘OK, let’s make it a little harder’ but as we made further and further adjustments, it ended up becoming the hardest game in the series. To this day, I don’t even have the confidence to beat the NES version of Ghosts ‘n Goblins. But, if you have the chance, please give it a shot and experience the ultimate difficulty.” 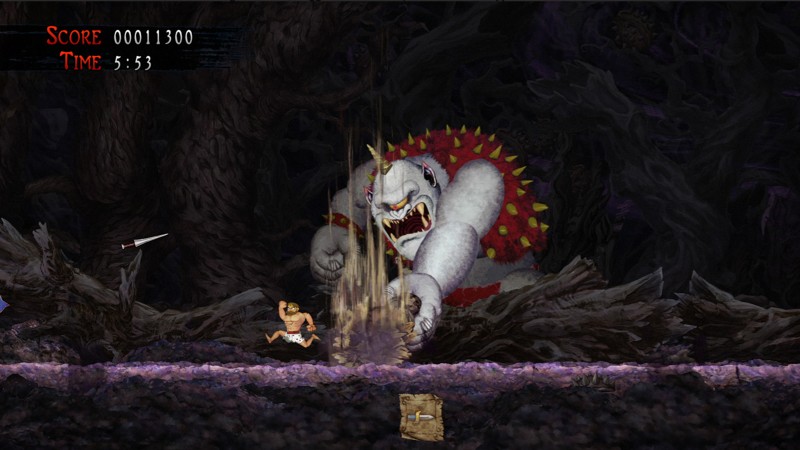 “Firstly, I wanted to present the hallmarks that have been important throughout the Ghosts ‘n Goblins series,” Fujiwara says. “The first is the sense of achievement players feel taking on a new challenge and the second is a ‘horror theme park’ aesthetic that inspired the stages and visuals in the game. These two concepts have always been essential to the series and we’ve incorporated new ideas in order to achieve this in Ghosts ‘n Goblins Resurrection. I didn’t start off thinking that I had to incorporate something new and novel because it’s a new title. Instead, I looked for ways to cherish and simultaneously renew the essence of this IP.”

That meant infusing the platformer with elements that have become more commonplace in contemporary games. Updates include a new magic system, where players can collect Umbral Bees in the world and unlock spells that turn enemies into frogs, tear into foes with lightning, and other powerful abilities. Considering how easy it is to get your armor knocked off and turn into a pile of skeletonized remains, any help is welcome. 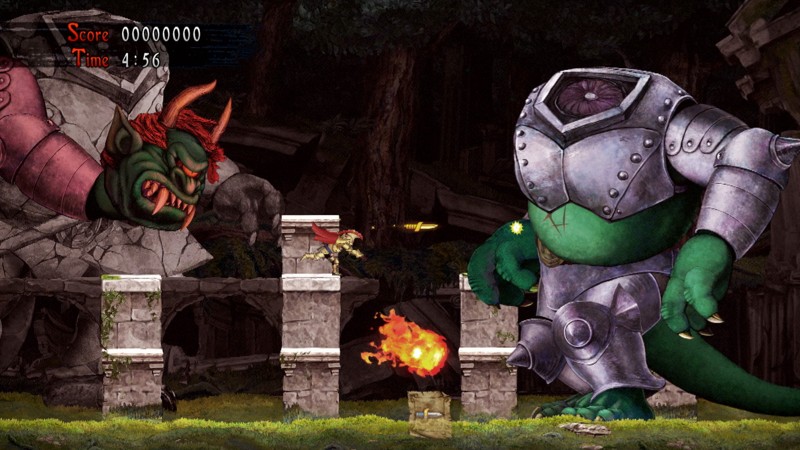 The task of updating the franchise was daunting, Hirabayashi says. “Getting handed the baton for an IP that has such a rich, beloved history of 35 years was both an honor and simultaneously intimidating. In order for me to deliver this title, I truly had to understand the history and the love fans have toward this series. This made me realize I had to ensure this title would respect the memories fans have of this IP (which made me even more nervous, haha).”

The inclusion of magic spells is certainly a flashy change from older games, but it’s not the most meaningful. Because of the original games’ difficulty, reaching the true ending was an achievement. For those who were able to meet the challenge, it was a testament to their perseverance and skill. And for everyone else, it was probably a disappointment and a reminder of their gaming mortality. With Resurrection, the team wanted as many people as possible to be able to fully appreciate their hard work. That meant revisiting the concept of difficulty. 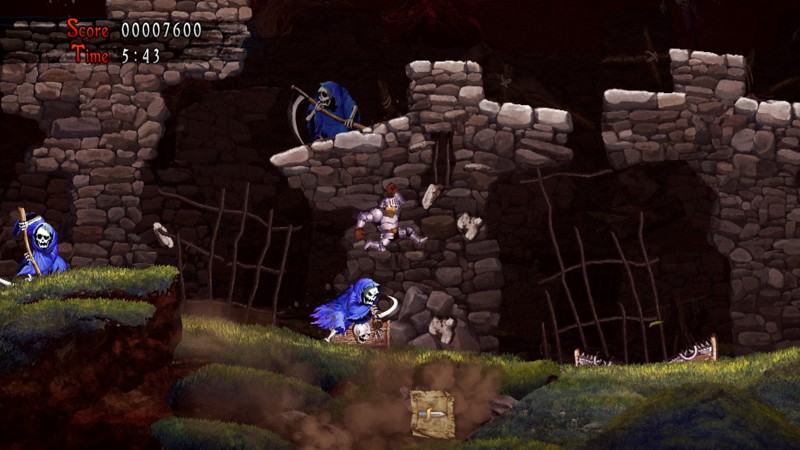 “Fujiwara-san suggested having multiple difficulty modes early on in the development phase, and I immediately agreed to this,” Hirabayashi says. “He explained his vision on what this would look like and I was able to think about it and see how this would fit within the Ghosts ‘n Goblins series. Since the level of proficiency is so different between players and because everyone has their unique relationship to the IP, we decided to incorporate multiple difficulty modes so that each person can achieve their own sense of accomplishment.

“Our intention wasn’t to simply provide an easier experience of something difficult. Rather, we wanted to provide an experience that matches each player’s proficiency to allow them to reach that sense of accomplishment that has been the core of the Ghosts ‘n Goblins series since its origins. It would make us happy if you’re able to find the optimal difficulty mode that fits your playstyle. In order for you to find this, we’ve provided short messages that appear when selecting between difficulty modes. For hardcore fans and experienced players, we think the Legend or Knight mode will suit your needs.”

Ghosts ‘n Goblins: Resurrection is out February 25 on Nintendo Switch. To learn more, check out our review. 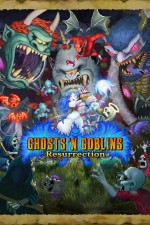