Eli Roth's Borderlands movie is preparing to go all-in production-wise under the Lionsgate helm. With reports circulating heavily of comedian Kevin Hart's involvement, cautious interest in how this will turn out has been high. With COVID-19 lockdown restrictions continuing into 2021, a lot of aspects of the entertainment industry, particularly with movies, have come under question, but it looks like the studio is prepping to begin filming soon in Budapest, Hungary.

MidAtlantic Films head Adam Goodman recently sat down with the folks of The Hollywood Reporter to talk about what's next for the upcoming movie, saying "We're opened up space for a Lionsgate film, Borderlands [starring Cate Blanchett and Kevin Hart], we're doing season three of Jack Ryan for Paramount TV, and we're doing a Marvel project, which, for the usual security reasons, I can't talk about. We're basically fully booked for the coming cycle, until the summer, which, hopefully, will be the last cycle of shows we have to do under COVID-19 protocols."

As for Hart's reported involvement, his role has yet to be defined publicly at this time. Previous rumors have him slated to take on the role of Roland alongside Cate Blanchett's take on our beloved Lilith. It will be interesting to see the full cast list when it rolls out and who will be playing who.

The move to Hungary has been a popular choice for many in film and TV due to its place within the pandemic. Hungary was a location that was among the last to implement lockdown restrictions due to low infection numbers at the start of the spread. The government was also proactive with taking measures to overcome the virus with a heavy focus on getting industries like the film industry back up and running safely.

“I’m so excited to dive into the world of Borderlands and I could not be doing it with a better script, producing team, and studio,” said director Eli Roth when the Borderlands movie was first announced. “I have a long, successful history with Lionsgate — I feel like we have grown up together and that everything in my directing career has led to a project of this scale and ambition. I look forward to bringing my own energy, ideas, and vision to the wild, fun, and endlessly creative world of the game. Randy Pitchford and everyone at Gearbox have been incredibly supportive of my ideas — it really feels like a perfect storm of creators coming together. We are out to make a new classic, one which the fans of the game will love, but also one which will find new audiences globally."

Hopefully we'll learn more here shortly about who else is involved with this project and what the adaptation will have to offer longtime Pandora dwellers. Who do you hope to see reprise a role of a beloved Borderlands character in the upcoming movie? Sound off with your dream cast in the comment section below! 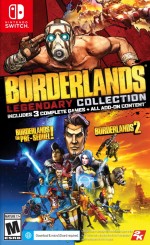