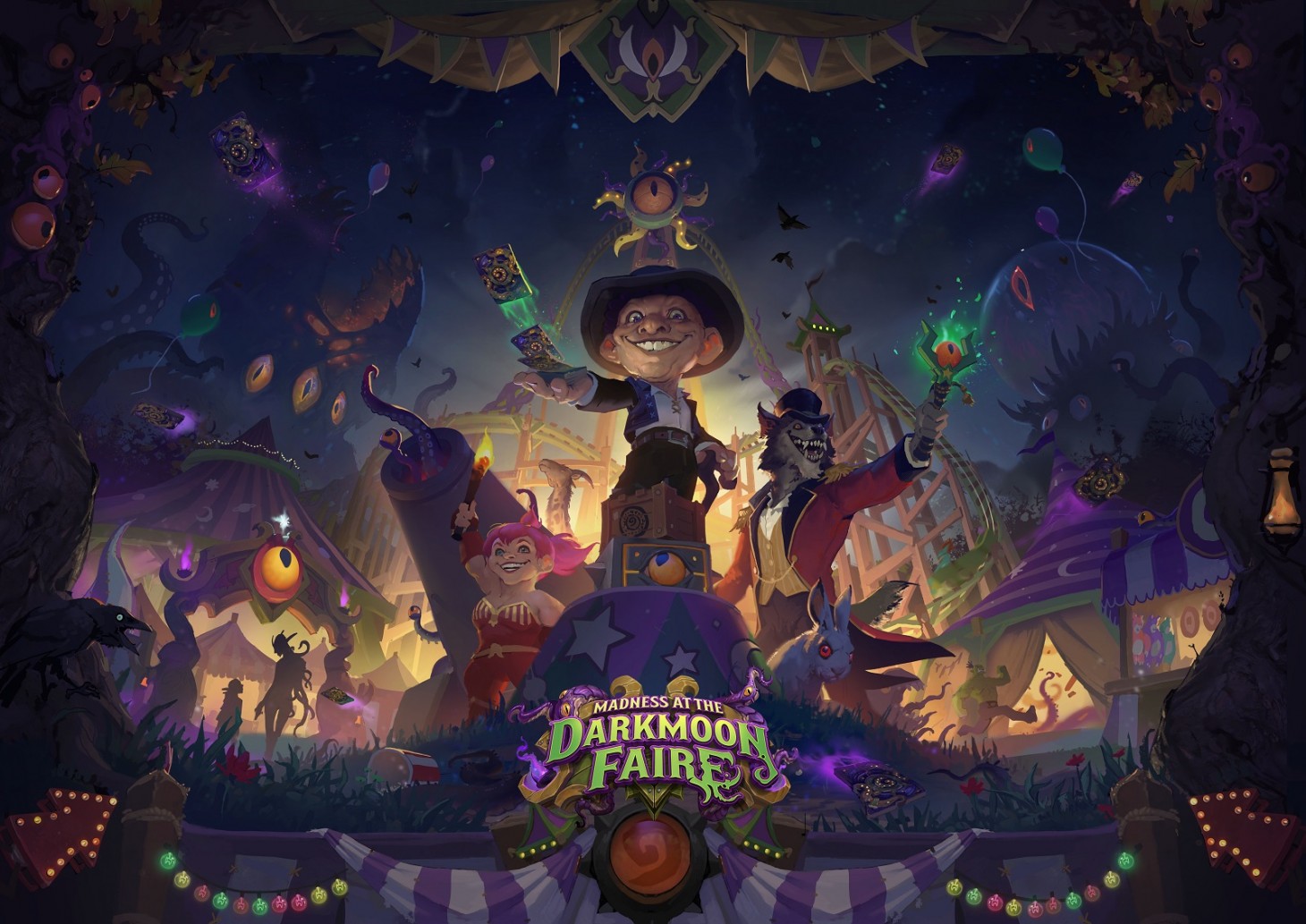 Hearthstone's Madness At The Darkmoon Faire Is Coming In November

Hearthstone's next big expansion is Madness at the Darkmoon Faire, and it's scheduled to arrive on November 17. The set features old gods doing all kinds of evil cosmic horror things admidst the colorful carnival backdrop of the Darkmoon Faire. If you've ever played World of Warcraft, chances are you've hit up the Faire before in a quest to score some cool tickets, yummy treats, or to play some of those fun carnival games. Here in Hearthstone, the Faire is loaded with new toys to play with!

Giant old god cards are back, with fresh styles and abilities. N'zoth, C'thun, Y'shaarj and more are going to be spreading their cosmic corruption all over the denizens of Azeroth as they attempt to enjoy giant turkey legs and flagons of ale at the Faire. These old gods are expensive to cast and come with flashy skills, but the corruption mechanic may be the most interesting thing about the expansion.

Many card games turn into a pursuit of "playing on curve" in order to have an efficient deck. That is, playing a one-cost card on turn one, a two-cost card on turn two, etc, in order to stay ahead of the game and your opponent. Corruption cards reward you for holding on to spells and maybe playing them later than curve allows, as you need to play a higher-casting cost card in order to trigger the corrupted effect. On some cards, this is just a stat boost, on others it has more significant effects. Either way, you're hopefully going to have more decisions to make during a game instead of just plopping everything down by the numbers.

Check out a sweet presentation about what's coming in Madness at the Darkmoon Faire right here.

In addition to the new expansion, a new mode was announced and also launched in early access. Duels! Hearthstone Duels is like they took the dungeon crawling roguelike experiences that they've been creating for single-player adventures over the last few years and set it loose in a PVP competitive format. I spoke highly of these dungeon romps back when they first started to show up, and that praise is likely to extend to this format.

In Duels, everyone gets to be broken and overpowered, but it's about who can come up with something more busted over the course of a run. With 15 of your own cards, special heroes, wild abilities, powerful passives, and incredible treasures, Duels is a mode with a ton of creativity and chance as you build your strategy over the course of multiple games. Early Access is available for a "pre-season" trial for those that preorder Madness at the Darkmoon Faire, but the mode will be available for all at no cost on November 12. Check out more on Duels below!