Detroit: Become Human challenged players to dive into an existential narrative about what it means to be human in a world that seems to be losing its humanity by the day. To celebrate the PC version of the game, Quantic is offering a limited-edition collector's edition for Detroit fans to enjoy.

The new Detroit: Become Human collector's edition is limited to just 2,500 units, which makes it very limited in quantity. It offers a Kara statue as well as pins themed after the game and a CyberLife ID card with a game code attached.

You can see the full glory of the new collector's edition in the video at the top of the article with a first glance look below: 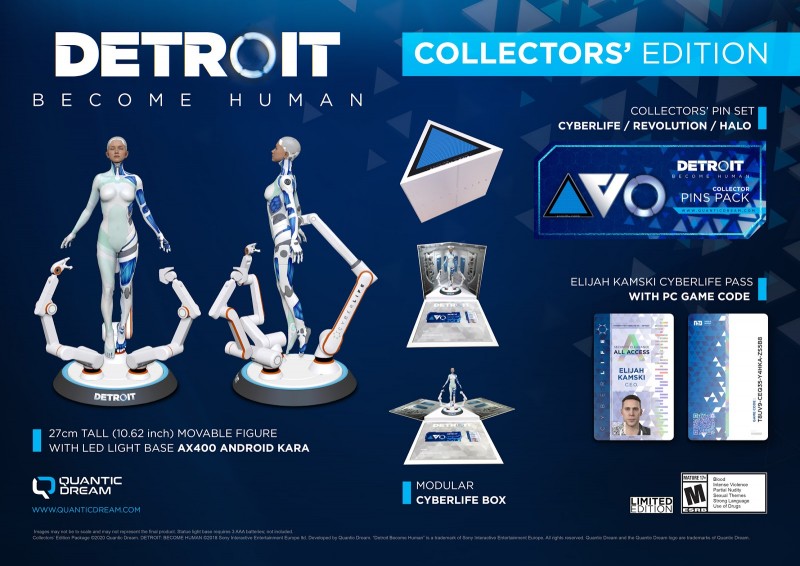 The statue itself stands just over 10.5 inches tall on a base that is illuminated by LED right lights. With over five million units sold worldwide, this is just another excuse for those that haven't jumped in yet to do so and experience this game for themselves.

The Detroit: Become Human collector's edition runs for $349.99 and is available in the Quantic Dream Shop as well as selected retailers worldwide.

The game itself was met with mixed reviews with some calling the gameplay experience revolutionary while others weren't as impressed. It's a slow-pace adventure, definitely not one for action junkies, but it is an experience rife with choices, consequence, and learning human nature with all of its ugly parts.

"Detroit made me think about topics I've avoided about humanity and our future, and that's a good thing," said our own Kimberly Wallance in her review of Detroit: Become Human for Game Informer. "These are hard issues to explore, and I'm glad Quantic Dream took on the challenge knowing it could result in failure. Detroit both succeeds and stumbles in that area. Its biggest assets are the relationship building and expansive branching paths. I keep coming back to explore its variations. Not only are they fascinating, but I cared about where I left these characters. The overall message about technology and our future lingers long after the credits roll, making me wonder how I'll handle my relationship with technology as it takes us to new places. "

What do you think about the Detroit: Become Human collector's edition for PC? Have you played the game yet, what did you think? Sound off with those existential thoughts in the section below, we'd love to hear what you thought of it!