This homebrew allows Mass Effect and Dungeons & Dragons fan live out their N7 fantasies within a world that is fully fleshed out in the 5e platform.

"The Dungeons & Dragons roleplaying game is about storytelling in worlds of swords and sorcery and Mass Effect 5e takes that storytelling to the stars," reads the official description of this particular homebrew. "Both shares elements with childhood games of make-believe. Like those games, D&D is driven by imagination. It's about picturing the alien landscape beneath the two-sunned sky and imagining how an N7 soldier might react to the challenges that scene presents."

One player will become the Galaxy Master, formerly known as a Dungeon Master. From there, the world of Mass Effect unfurls. According to the player manual, "In the Mass Effect 5e game, each player creates an operative (also called a character) and teams up with other operatives (played by friends). Working together, the group might explore a derelict starship, the slums of an inhabited asteroid, the glorious streets of an advanced civilization, an ancient temple deep in a jungle, or the steppes of a mining colony. The operatives can solve puzzles, talk with other characters, battle alien monsters, and discover advanced technologies and relics from a past age."

The Galaxy Master is the game's storyteller tasked with making sure this interstellar transition into the world of 5e remains flawless. The role of the Galaxy Master is to create unique missions for the characters to navigate dangers fans of Commander Shepard are already familiar with. From jumping to safety in the hanger bay to being able to use biotics to affix oneself to an astroid, the sky is the limit – literally – when taking part in this particular Mass Effect-inspired journey.

And unlike the three color choices, the Dungeons & Dragons Mass Effect experience has no real end. As soon as one quest wraps up, a new one can immediately begin, which makes the campaign everlasting and with limitless potential.

The creators of this homebrew added, "Together, the GM and the players create an exciting story of bold operatives who confront deadly perils. Sometimes an operative might come to a grisly end, torn apart by ferocious rachni or done in by a nefarious Cerberus assassin. Even so, the other operatives can search for breaking-edge medical experiments to revive (or clone!) their fallen comrade, or the player might choose to create a new character to carry on. The group might fail to complete a mission successfully, but if everyone had a good time and created a memorable story, they all win."

Players can also choose between two galaxies to explore: the Milky Way from the trilogy, or the Andromeda galaxy from the fourth Mass Effect game. Both galaxies provide a very different experience, much like the video games themselves, and both have unlimited potential in terms of where the story can take players.

While it's not the confirmation many are looking for with a Mass Effect Trilogy remaster, it is at least a nifty way to keep that space love going while waiting on official news. Plus, again: turians. Do it for the turians, always.

You can learn more about how to get started with this Mass Effect Dungeons & Dragons homebrew right here. 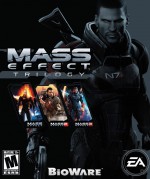