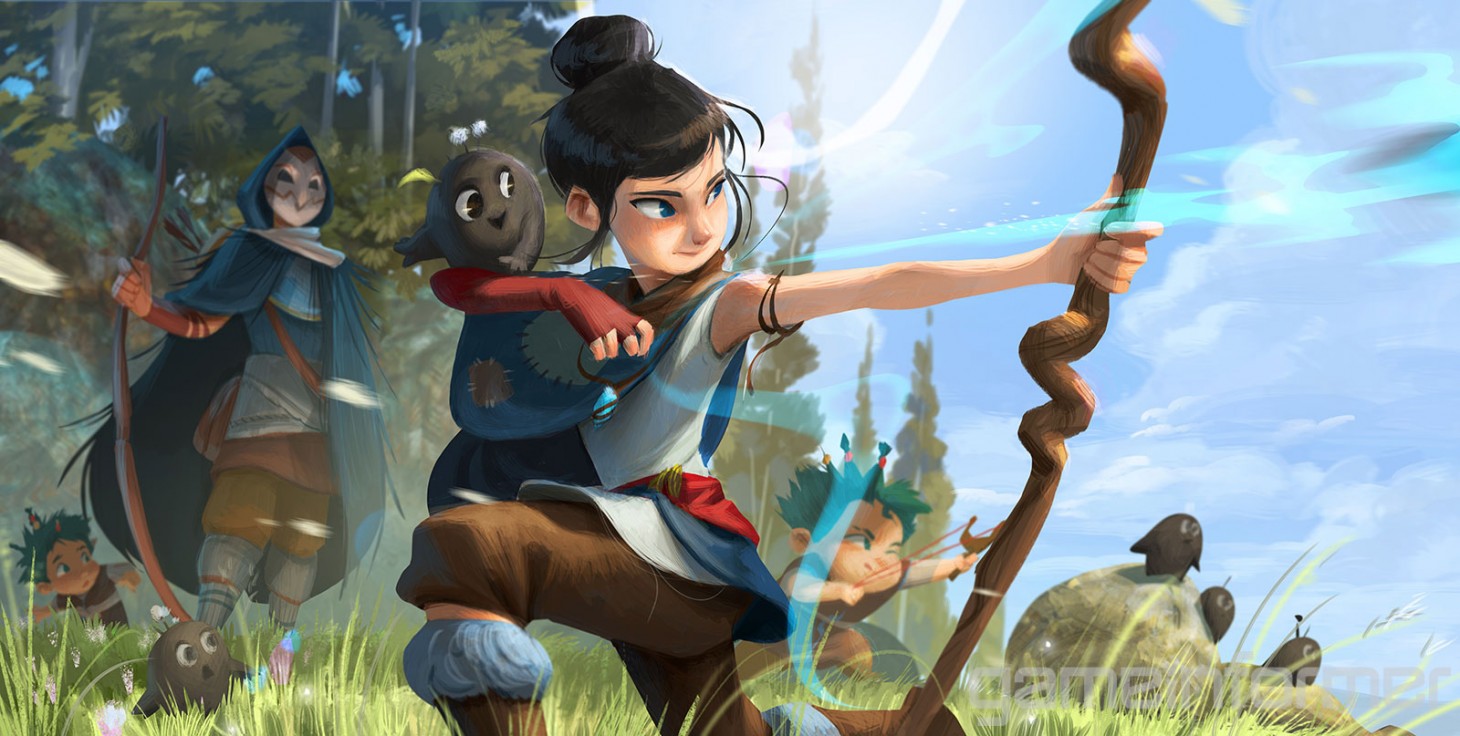 A lot rests on the shoulders of a game’s protagonist. After all, the player has to embody that character and should be drawn to them and their world. In Ember Lab’s Kena: Bridge of Spirits, we’re transported to a beautifully animated spiritual realm just begging to be explored. Kena is our guide. She has an aura of mystery around her, but also radiates a kind warmth. Plus, she’s got to be pretty awesome if all those adorable Rot want to help her. While learning more about Kena: Bridge of Spirits for this month’s cover story, we couldn’t resist finding out more about our leading lady and the story behind her creation. 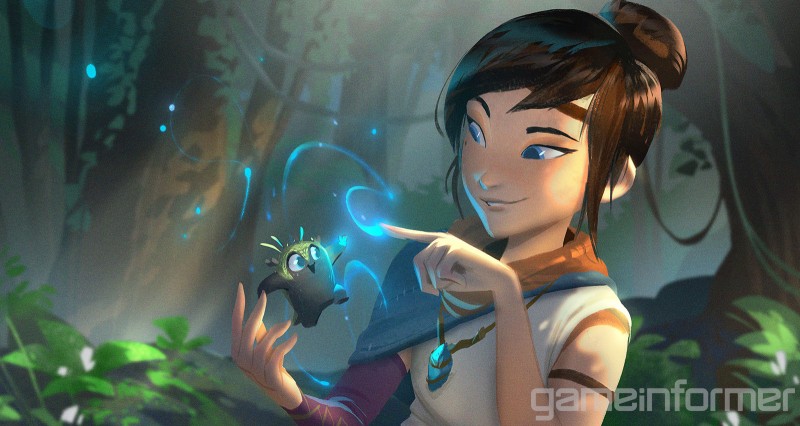 Believe it or not, Kena was not always the star of the Ember Lab’s debut game. Early prototypes focused more on the black critters called the Rot, experimenting with them as the antagonists and then relying heavily on them in and out of battle to drive the game. In fact, Kena was not even in the team’s first prototype. “She was part of the next one we did, and it was fleshing out her story and the story of what makes her unique and why the Rot trusts her and connects with her; that was a big part of her development and the look of her and the abilities that we wanted her to have,” says chief creative officer Mike Grier.

In earlier prototypes, Kena was much younger, around seven or eight years old, but that changed as the team thought more about the story and what was at the core of it. “As we developed more of a story and the themes and we knew we wanted her to be a spirit guide to help these spirits move on, she needed a little more experience to do that,” Grier explains. “She’s still a younger spirit guide, but it didn’t feel right to have her being a child trying to empathize with these darker, more adult themes.”

Ember Lab liked the idea of having Kena and the Rot come together for a common goal of restoration, and the evolution started there. “As we started developing her character and the idea of her guiding spirits and helping out other humans, that’s when she started to really get her own identity, and we wanted to make her so on her own she can stand toe-to-toe with these bigger spirits. And I think that gives her a lot of what people connect with when they see her and why people like her so much.” Grier says. 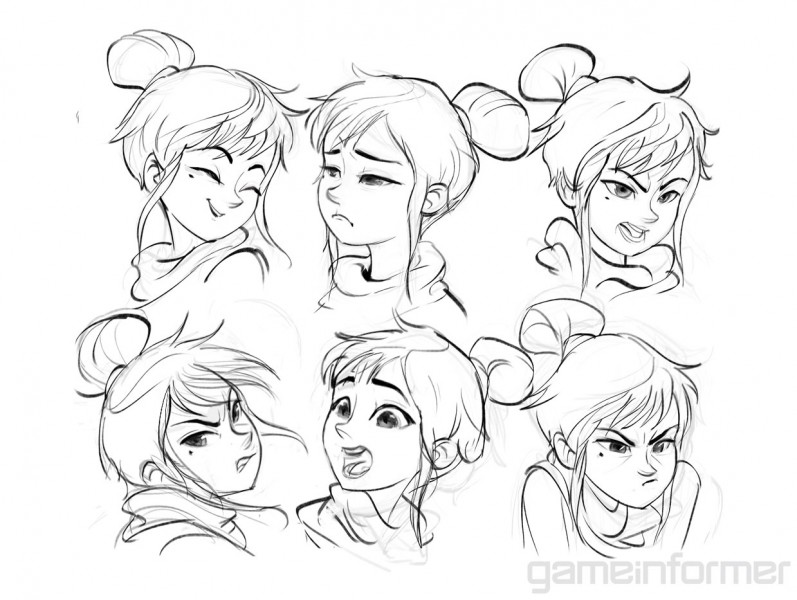 Once Ember Lab had settled on Kena and some of her core characteristics, it was time to start putting together her design. The team enlisted the help of its lead character designer Vic Kun, a longtime Ember Lab collaborator who has been building a name for himself in the Chinese animation scene. “Since she is our main hero, we developed many versions and explored variations in color,” Kun says. “We struggled a bit to find a balance between Kena’s design fitting into the world while still allowing her to stand out. Our overall mood and tone of the environment is usually very forested and sometimes quite dark in the shadows of trees.”

Due to these challenges, some concessions needed to be made before deciding on Kena’s look. “We decide to use 60 percent off-white on her clothes and mix in earth tone as much as possible,” Kun says. “Mike and I also tried to work in a long cape element to help Kena stand out a bit in the foliage. But when Animation started adding natural movement to the piece, it ended up being distracting. So, we changed that into a tighter shawl. It still has some movement and helps break up Kena’s outline.”

Even the little details mattered, such as making sure the needlework was visible on Kena’s shawl and pants. “The main idea of the design for her costume is asymmetry in every detail and adding a hand-crafted element, Kun explains. “We tried to make her clothes feel handmade, practical, and functional.” The team also added details to the symbols to create a unique culture for the game. “We drew inspiration from Japanese and South East Asian cultures to inform the designs of our symbols,” Kun says.

One part of Kena’s appearance that will get more explored in the narrative is a scar on her arm.  “You just see a little bit on her hand but it actually runs up her whole arm onto her shoulder,” Grier says. “It represents this traumatic experience she had with her father.” Because it’s a big plot point, we won’t spoil anything on how she gets it or how it impacts the plot, but she does form a special connection with the first Rot she meets due to it.

A Reason To Fight

At its core, Kena: Bridge of Spirits is a more peaceful journey that has her being one with nature and on a quest mainly to restore peace and help troubled spirits in need. Still, Ember Lab wanted her to have some conflict and cool powers to handle it. The team experimented with a lot of different ideas; at one point the Rot ran the entire show, “Originally, she didn’t have many abilities of her own, she was kind of basically like A Boy and his Blob; you can’t stand on your own, you need the blob to do everything for you,” Grier shares.

However, as the team played around more with different concepts, they settled on something that felt right and made sense for Kena as a spirit guide. “One of the ways that we’ve done that was making sure that Kena feels powered up with her spirit energy and with the Rot, so it doesn’t feel like she’s the Hulk by herself,” says designer Liz Fiacco. “There’s this magical edge to our combat. Trying to make enemies threatening so it feels like she needs to defend herself as opposed to she’s come here to lay waste to all these threats in the forest. I think those two seem to be the angles we’ve used to keep Kena consistent through combat.”

Ember Lab also wanted to ensure that combat felt realistic to Kena’s abilities and power. After all, she is facing off against enraged spirits. “She battles some pretty big spirits, and we want them to feel intimidating,” Grier says. “A design goal for every combat game is: What do you want the combat to feel like? When you’re with Kratos, you’re just ultimate power. But Kena gets tossed around a lot. If she gets hit by a big attack, she’ll go flying and we wanted to make her feel vulnerable in that sense. She’s strong, but she’s not this brutish sort of [combatant].”

Kena may not be overpowered, but she can make up for it in interesting ways. She can call in the Rot for help to damage and distract enemies once their courage meter is high enough, use her pulse ability to produce a bubble that acts as a shield, or smack enemies with light and heavy attacks using her staff. She can even turn said staff into a bow for ranged attacks.

Kena isn't as big as the spirits she faces, but she can use her agility to her advantage as well. “Kena’s mobility is something that I’ve been pushing for, and it’s been a challenge making enemies being able to keep up with her, because she can sprint, run, double jump, but I think her mobility is really fun,” Grier says. 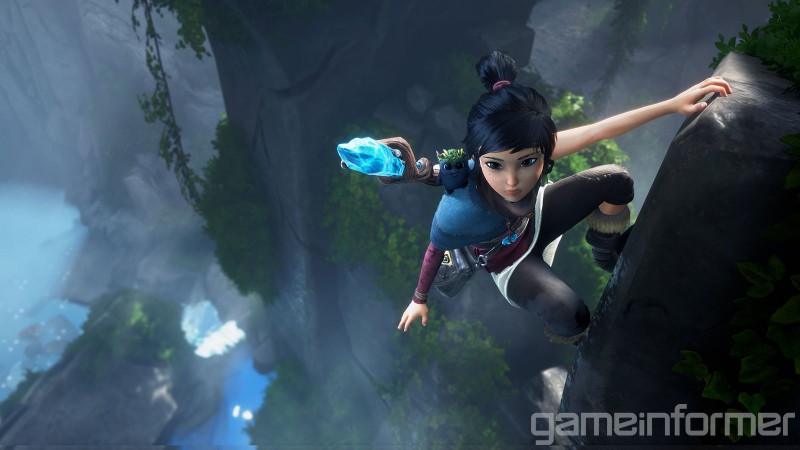 While Kena: Bridge of Spirits certainly feels like a whimsical adventure, teeming with childlike wonder in discoveries and adorable characters, it also deals with some more serious and contemplative subject matter. Kena’s journey will be an emotional one at times. “Kena’s connecting with these spirits and having to let them go, and we’re trying to put that same sort of emotional weight in the player’s hands as much as we can,” Grier says. “If we can nail that and nothing else, I’ll be happy.”

“As Kena helps out others, she learns about herself and gains something hopefully beyond sympathy, but more toward empathy and understanding things,” adds designer Jessica Kernan. “That can kind of help her further her own personal development, which in turn helps her help other people. So we’re touching on these big, lofty ideas of how experience, even the bad things, can lead us to relating better to other humans, basically.”

It sounds like Kena: Bridge of Spirits has plenty of wisdom to offer, and we will learn it through Kena, who Ember Lab clearly put a lot of thought into creating and making unique.