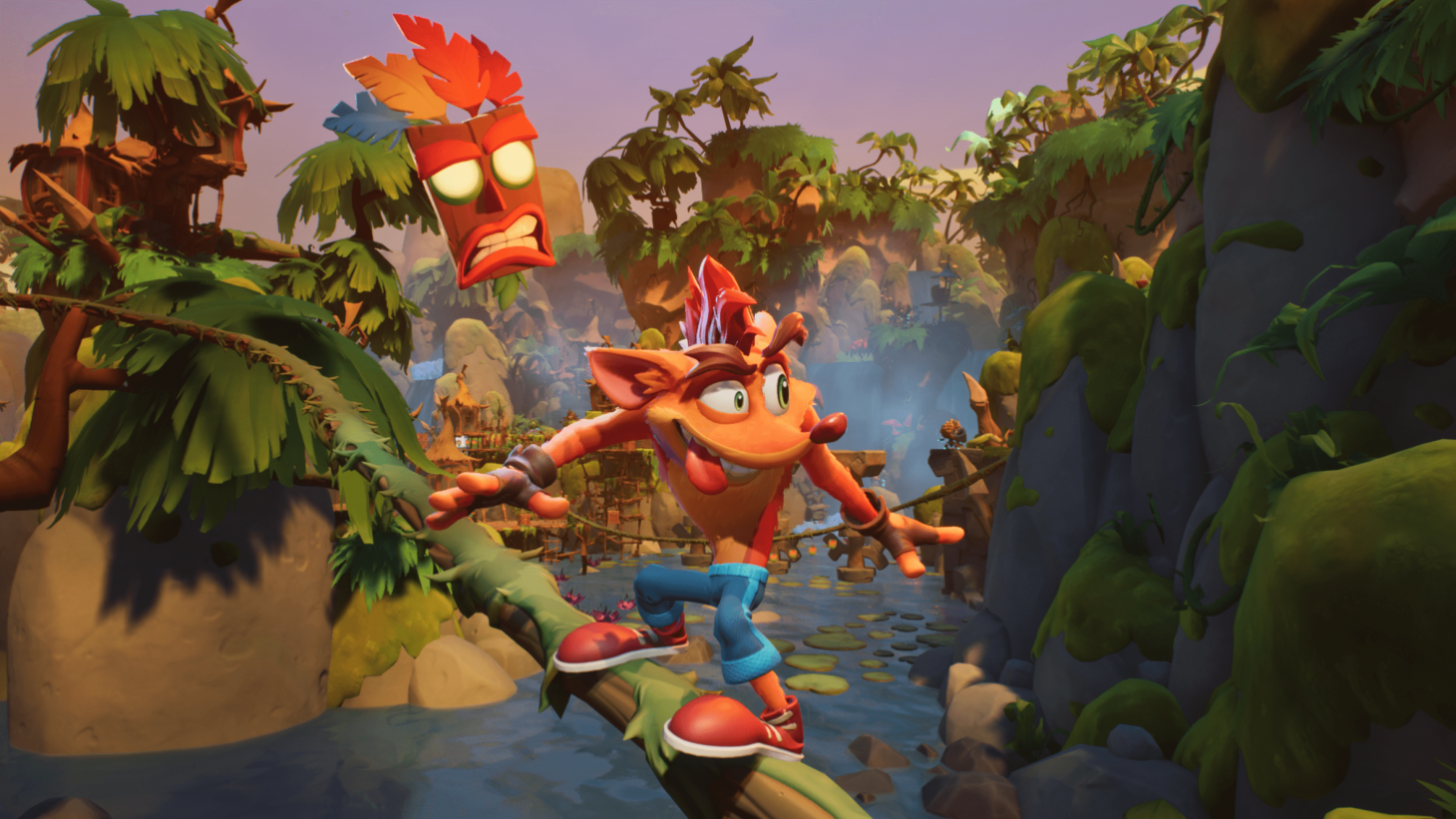 An Exclusive Look At Crash Bandicoot 4: It's About Time

The opening cinematic for Crash Bandicoot 4: It’s About Time is of an extreme close up of Neo Cortex. He’s smiling, aggression lines his brow, but his eyes carry a different story – they’re crazed nearly to the point of spinning. The camera pulls out to show Cortex is violently beating something with a stick. As we continue to drift away from Cortex, we see his anger is being taken out on a straw dummy made to look like Crash Bandicoot. He’s beating it senseless.

As we pull back more, we see Cortex is trapped on a small asteroid floating deep in space. This shot not only shows us he’s losing his mind, but he isn’t alone on this rock. He’s joined by the equally notorious Doctor N. Tropy, who just happens to be conversing with Uka Uka, a floating mask that may out-evil both N. Tropy and Cortex combined.

As the trio argues about their fate on the asteroid and how they need to keep trying to escape from this floating prison, we are shown a quick snapshot of a rock used as a chalkboard has 22 tally marks on it. This number is significant in two ways: For this story, it shows the number of years the villains have been stranded here, and for us in the real world, the number of years that have passed since the release of Crash Bandicoot 3: Warped on PlayStation. 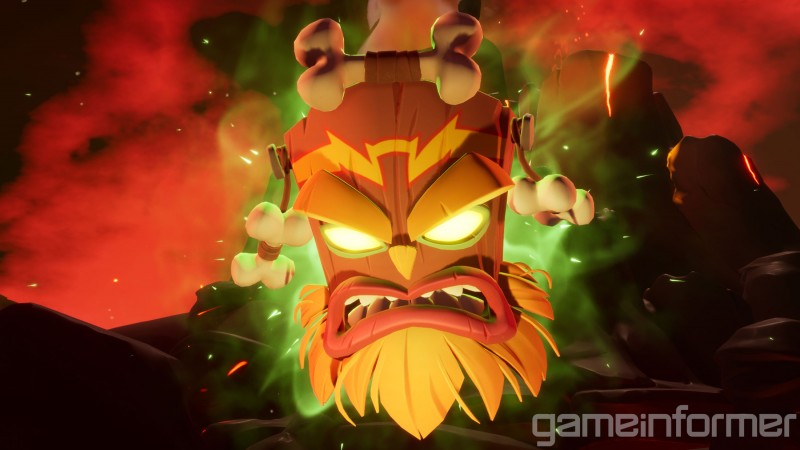 It’s About Time’s story picks up exactly where that game left off 22 years ago. Developer Toys for Bob is essentially retconning all of the sequels and stories that came after, designing It’s About Time to be a true continuation of the original PlayStation trilogy.
The intro movie concludes with Uka Uka growing so angry that he knocks himself out, but his rage opens a tear in time and space that leads to the world he previously tried to conquer. When finding a way to escape, his science wasn’t exact; the tear also leads to different dimensions and eras. Cortex and N. Tropy waste no time fleeing the asteroid. Although Uka Uka is their savior in this moment, they leave him behind.

Entities that are tuned to the cosmos are aware there’s a tear and that time and space are being upended. Aku Aku, the mask that has sworn to protect the Bandicoot family, is one of those beings hit with a sense of dread, and fears something terrible is about to happen. He hastily awakens Crash, who just happens to be napping on an old patched-up couch sitting on N. Sanity Beach. The orange marsupial is startled but determined to help his old friend.

For fans of this series, N. Sanity Beach was the first level that greeted players in the original Crash Bandicoot game. Within a couple of minutes of starting this new adventure, Toys for Bob cleverly connects the final moment of the PlayStation trilogy with its first shot. The journey players are about to embark on is backed heavily by nostalgia, but the story carries the promise of going to unexpected places and trying new things. Crash won’t just be running through jungles. He’ll be traveling to prehistoric times and even to a fishing town operated by zombies.

Toys for Bob took me on an extensive tour of It’s About Time to show off these new worlds and the nostalgia that drives them, along with the new changes players can expect. It’s going to play like the Crash games of old, but with more depth, especially in the collectibles that players can find. From new costumes to more gems to hunt down, there should be plenty of reasons to invest serious time in this sequel. 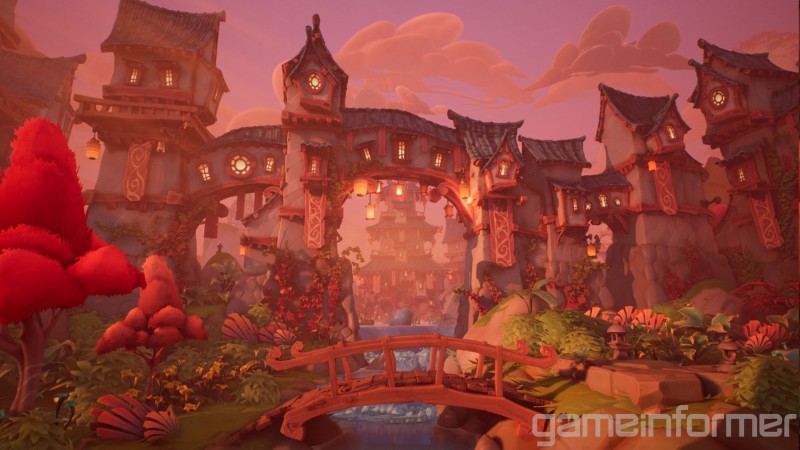 Endgame For The Masks
Crash and Coco are the stars of this time-bending adventure, but the true “heroes” may be the Quantum Masks. Aku Aku isn’t the only one that will be helping the marsupials. Different masks that provide unique powers are spread across the world, and they must unite if the fabric of space and time is to be repaired. The masks, of which there are four of the quantum variety, need the marsupials’ help. They need physical beings to meld with to unleash their powers.

In an exclusive look for Game Informer, Activision showed me the final new mask. Named ’Akano (with the apostrophe), the wearer spins violently like a top or tornado. As you would expect, Crash and Coco can use this power to smash through crates and enemies with ease, but its biggest benefit is revealed when a jump is performed. Given the inertia behind the spin, Crash and Coco lift high into the air and then settle into a slow glide. The spin continues indefinitely, but can be stopped by a quick button press, leading to sections where you can run around like normal and then activate ’Akano’s ability to spin dangerously across a stretch of the stage. 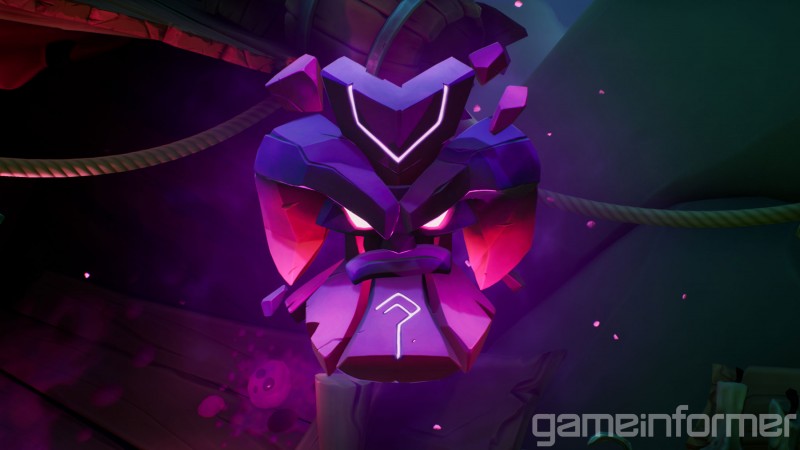 I saw this power used in a level called Give it a Spin, which serves as the tutorial section for ’Akano. This stage is a part of the Tranquility Falls world that takes the bandicoots to the year 1402. I see Coco warp in and sprint forward to greet ’Akano. He’s sitting in the middle of a well-trodden path surrounded by beauty. Trees with red leaves are all around her, and behind them sits a city on the hillside with houses crammed together to make it look like one giant castle. A pink sky with a few white clouds overlooks this backdrop.

When ’Akano merges with Coco, she dons purple armor with ’Akano fastened to her back. He taps into dark matter to initiate his violent spin, which can even shred metal crates (which usually require a body slam). Coco uses the power to shatter stacks of boxes, and then glides over a massive gap. Given how far she can travel with it, Toys for Bob decided to change the realistic shadow under her to a yellow ring that is easier to spot. Yes, it breaks the immersion and gamifies the action a bit, but it’s needed given how fast the gameplay moves.

Enemies that shoot projectiles are also at a disadvantage against ’Akano, who we see knock back gooey green magics to their hosts. The level is filled with all sorts of crazy wildlife, including hungry lily pads that will try to eat the bandicoots if they stand on them for too long. Dangerous Nitro and TNT boxes are everywhere, posing another challenge that requires quick switches from gliding to running to avoid detonating the crates. I also see a new crate type that has fire shooting out of four of its sides. Again, this is something you don’t want to interact with unless you hit it from the top, an action ’Akano’s glide can help make easier.

As the level is explored, I notice that crate progress is now updated through a handy meter, in this instance reading 112/216 have been smashed. Wumpa fruit and gems are also tracked in the same way for end-of-the-level completion goals. If you earn enough of any of these things, you unlock gems. Toys for Bob also included a death meter that shows how many lives you have left if you are trying to get the gem for completing a stage with three deaths or less. 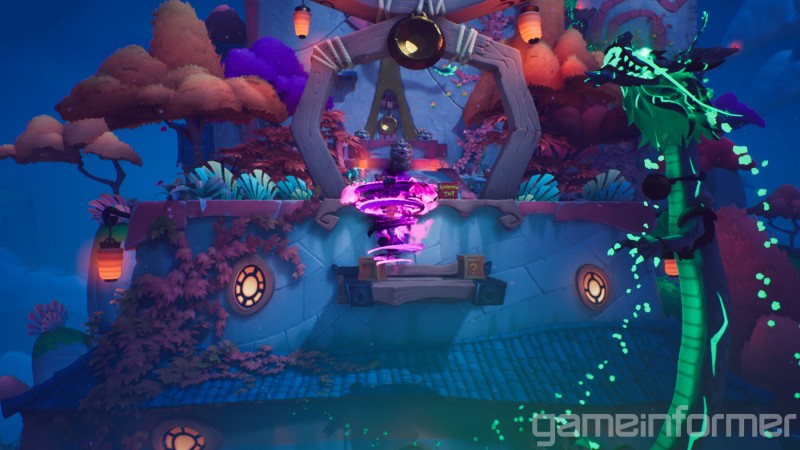 In runs through a level, a player could conceivably unlock six different gems, which could hit the required goal that unlocks a new costume for Crash or Coco. Both of these characters can unlock 26 unique costumes ranging from pirate attire to a dinosaur suit. These skins can be equipped at any time once they are unlocked.

Even if you obtain all six gems, the stage still holds more secrets. By entering that stage again through the new N.Verted mode, you can earn another six gems. In N.Verted mode, everything is mirrored, meaning a jump to the right will now be a jump to the left. Toys for Bob also changes up the art style. For Give it a Spin, the vibrant colors are washed away to stylish black and white tones inspired by sumi-e ink paintings. The level has an entirely new life to it, and Toys for Bob tells us the mirrored play will mess with your mind and throw off your muscle memory. The gems that are hidden in the level have also moved to new locations. N.Verted mode basically doubles the number of stages. The wumpa fruit in N.Verted mode is called bumpa fruit and is colored purple instead of orange. 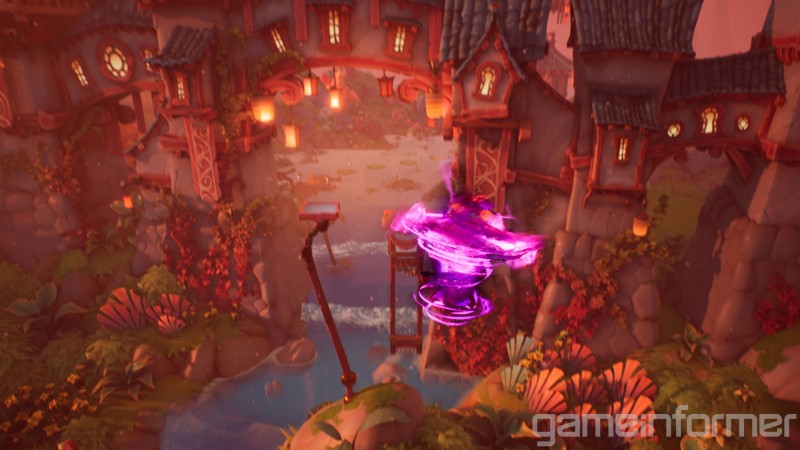 The sumi-e art style is only used in the Tranquility Falls world. Each of the other worlds have their own unique art styles for this mode. Hazardous Wastes’ N.Verted look leans heavily on neon lighting to lead players along, only it dims over time and checkpoints have to be hit to brighten them. The N. Sanity Island world uses something Toys for Bob calls “sonar-like” that pings enemies and pits and gives players just enough of a visual indicator to get by.

I was given a tour of the Dimensional World map that draws heavy inspiration from the first game. You’ll see dotted lines leading from the different stages. The core levels are represented as circular spaces. The Timeline stories, which let you play as villains or other characters, are represented as square spaces. In most worlds I only saw one square space, but some have more.

The worlds I saw were Mosquito Mash, with the time of “a few days ago.” The Timeline square for this world is occupied by Dingodile, meaning you get to play as him and see how his interactions affect Crash and Coco’s progress through one of the world’s levels. N.Sanity Island’s world is set during the present day. Hazardous Wastes takes players to the future year of 2084, whereas Salty Wharf takes them back in time to 1717.

Time trials return to each level, but with a little twist: Toys for Bob recorded a playthough and created ghosts for each Relic (Sapphire, Gold, Platinum) so players can get immediate feedback in real-time to see if they are going to beat the time or not.

Crash Bandicoot 4: It’s About Time looks ridiculously fun, and is shaping up to be a charming love letter to the series Naughty Dog created. The new ideas blend right in with the existing platforming action. We just need to see how it plays and all comes together. Thankfully we don’t have long to wait, as the game hits PlayStation 4 and Xbox One on October 2.

This article originally ran in issue 329.