No Straight Roads is a stylish, music-driven action game that incorporates rhythmic elements, even if it you aren't necessarily hitting notes as they come flying toward you. After a delay earlier this summer, the game is now officially out on PlayStation 4, Xbox One, Switch, and PC, and you can see the colorful launch trailer above.

We thought No Straight Roads was one of the best indie games of E3 2019 (alongside the recently released Spiritfarer). In addition to a story about fighting back against an evil musical empire, the game also features local cooperative play.

For more about No Straight Roads, watch our interview with Metronomik's Wan Hazmer, who also has some behind-the-scenes insight from his time working Final Fantasy XV. 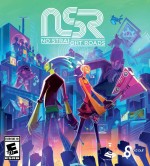