PGA Tour 2K21 is shooting to have course accuracy down to one centimeter in potential variance thanks to aerial mapping technology created by Terra Imaging. The game's developer, HB Studios, teamed with Terra to gather data from some of the world's top courses, including East Lake Golf Club, which you can see in the trailer above.

Terra pilots drones across each course to record 4k and 6K footage. "Every pixel we're going to be down to about a centimeter," says Terra's executive producer Karl Engstrom. "We're gonna have the latitude and longitude of every pixel. This data we're going to combine it into a 3D-point cloud, tying together cinematography, aerial photogrammetry, and ground control points." That data is then inserted into the game to give HB Studios a near-perfect blueprint of the course to work with.

PGA Tour 2K21 features many of the courses you'd expect to see from the league, along with many of the pros. Holding true to The Golf Club series it is born from, PGA Tour 2K21 players can once again expect precise analog swings, and a deep course creator. PGA Tour 2K21 will also feature a career that gives you a shot at becoming the FedExCup Champion, My Player content, and a deep well of online play options such as full seasons, tournaments, stroke play, and a four-player scramble. 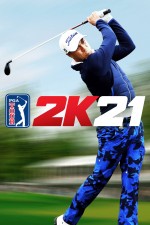