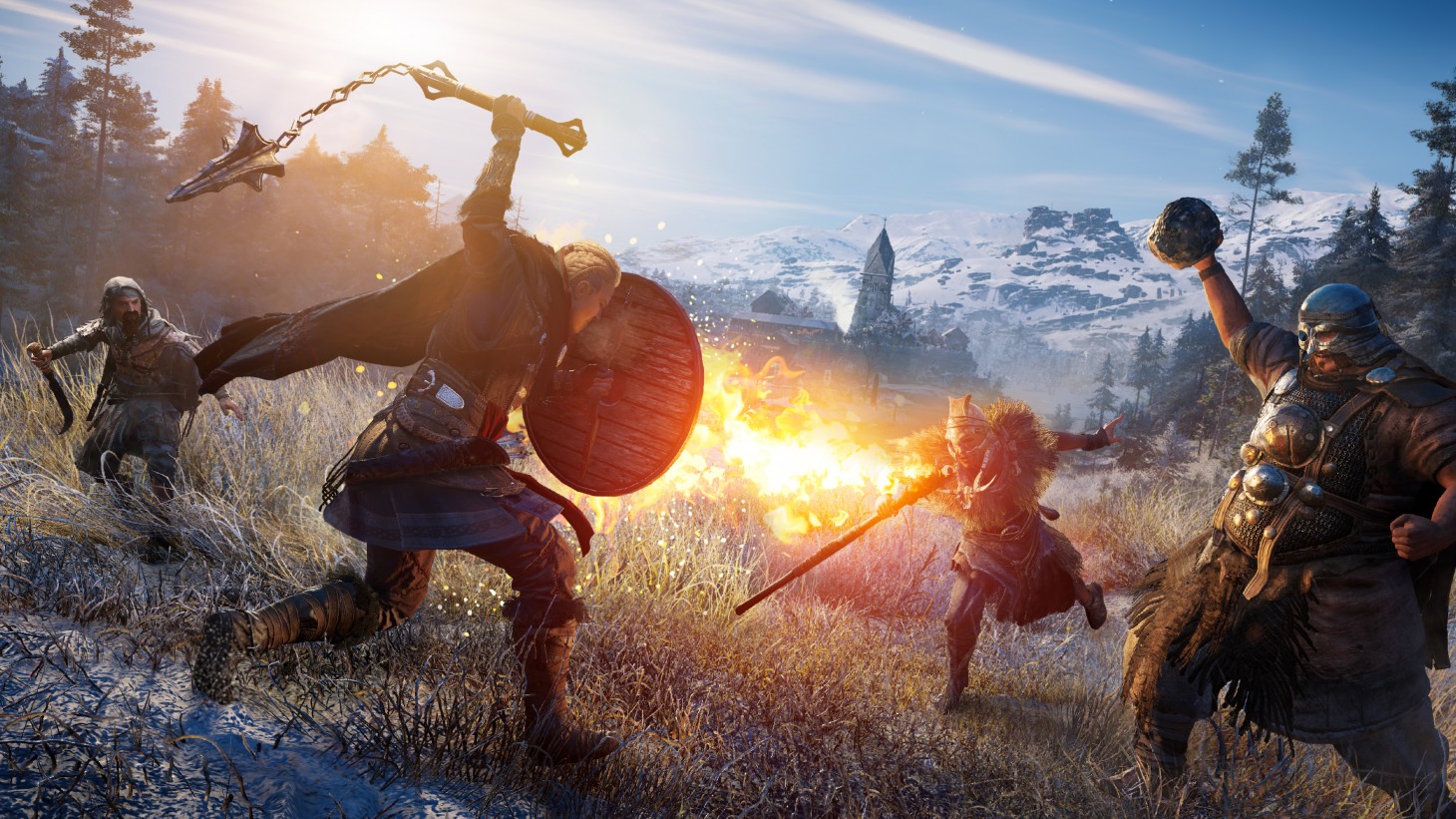 The King is dead … but for the Vikings, that’s merely a chance to build something new. When the Norse warriors first entered England in 873 CE, they discovered a land at war with itself. Several warring groups of Anglo-Saxons vie for power in a wild and untamed country. The Viking people may be fierce, but in England, they are also outnumbered. In order to survive, this band of Scandinavia settlers must make new alliances and friendships. To them, war isn’t a hardship, it’s an opportunity.

The tip of the Viking spear is a young warrior named Eivor. Players guide this capable hero throughout England to help them establish a new settlement for their kinsmen. As with Assassin’s Creed Odyssey, players choose Eivor’s gender at the beginning of the game and then guide him or her as they learn new abilities and acquire a nigh unending supply of weapons and armor.

Eivor’s journey eventually takes them to the territory of East Anglia where they make a pollical alliance with a would-be king named Oswald of Ellmenhind. Unfortunately, before Oswald is crowned, a rival clan of Danes led by a man named Rued invade and reportedly kill Oswald, leaving Eivor’s clan in the middle of hostile territory. Naturally, Eivor can’t let this stand. If Rued’s clan wanted a war with the Vikings, they got one.

Still, before Eivor leads an assault against Rued, they must rally more troops to their cause. To win the support of a local township, Eivor leads a raid against a group of bandits. These raids function a bit like the Fortress assaults in Odyssey, and Eivor can tackle them head-on with a bloody ax or skulk through the shadows, cleaning house with a hidden blade.

During my first playthrough, I took the stealthy route. In the last couple Assassin’s Creed titles, your success as an assassin was based on your skill level and the quality of your gear, so you could easily run into situations where you performed a stealth takedown only to watch your victim stand back up. In Valhalla, stealth attacks are more likely to take down enemies in one hit. I still encountered a few stronger opponents who shrugged off my hidden blade, but this was rare. Even so, when you initiate a stealth attack against a strong enemy, you have the chance to complete a timed button press that does extra damage, meaning you can still assassinate these hardy enemies without raising the alarm.

“We brought back a couple of stealth mechanics,” says assistant level-design director Laurence Letalien. “You can disguise yourself in certain areas where there are civilians. Guards are less likely to notice you when you have your hood up, and won’t notice you at all in crowds. Even if you’re in an area you shouldn’t be, you can disguise yourself so it’s harder to get detected. We also brought back some social stealth elements, like the monks from old Assassin’s Creed games, so you can navigate the world a bit while being stealthy.”

During my stealth raid, I cleared out an entire encampment without alerting anyone, but the end-boss encounter almost did me in. On my second playthrough, I led my fellow warriors into battle, and we completed the raid in about half the time. My soldiers did an exceptional job distracting the boss, which made that encounter much easier. You can complete most missions with a mix of stealth and aggressive combat. During one botched stealth encounter, I blew my war horn and called my men into battle, and they helped me clear out the rest of the encampment and finish the mission. Valhalla's mission design is flexible enough to let you complete each conflict as stealthy or aggressive as you like.

After completing my first Raid, I discover a Book of Knowledge, which unlocks a new ability called Dive of the Valkyrie. Most abilities are learned by finding these tomes hidden around the world. However, these texts are often heavily guarded or at the center of a military camp. Valhalla’s world contains multiple copies of each ability book, but if you find two of the same volume their associated ability grows stronger.

I immediately put Dive of the Valkyrie to the test, and it soon becomes my go-to move in combat, allowing Eivor to launch into the air before landing ferociously atop a single foe, crushing them underfoot. Another useful ability has Eivor grabbing an enemy and then kicking them to the ground, which stuns them and opens them up for a finishing blow. Meanwhile, Throwing Axe Fury allows Eivor to throw a series of axes that hit any opponent within a set range, which comes in handy for managing large crowds.

Many of Eivor’s abilities are great in combat, but some have other uses. One bow ability called Thorn of Slumber puts enemies to sleep, and I find it instrumental for completing encounters without causing a ruckus. A handful of other bow-based abilities have Eivor dipping arrows in poison, calling down a raven to distract foes, or marking multiple enemies before releasing a volley of arrows.

In addition to abilities, Eivor has a massive skill tree. Using points earned after each level, you’ll empower Eivor with an assortment of passive skills. “The progression system is pretty new,” Letalien says. “We have three main character routes that you can take. They are called the bear, the wolf, and the raven, and those correspond to the warrior, the hunter, and the assassin ways of playing.”

Valhalla’s skill tree is big and its edges are obscured by fog, so you won’t be able to see all your options until you begin unlocking nodes leading down each path. Naturally, these skills run the gamut and allow you to buff your various attacks, increase your resistances to things like fire, and otherwise improve your stealth capabilities.

The final element of Valhalla’s progression system is the collection of random loot Eivor amasses during their journey. As with the past couple entries in the series, players gather resources, such as leather and iron, which can be used to upgrade this gear, so if you find something you really love, you won’t necessarily need to swap it out when something better comes along.

During my session, I played around with an assortment of various weapons, from two-handed spears, long-range bows, and a spinning flail that delivered a series of small rapid-fire attacks. Eivor can dual-wield one-handed weapons – in fact, you can dual-wield shields if you’re so inclined. However, my favorite combo was an ax/shield combo, which allowed me to parry most enemy attacks and set my opponents up for instant takedowns.

After completing a couple of raids and leveling up Eivor, I’m ready to attack Rued’s stronghold and end his tyranny. I march my army up to the front gates of his castle and begin the assault. As with my previous raids, this assault is an all-out bloodbath, but once Eivor finally confronts Rued, I'm faced with a moral choice: Do I take Rued as a prisoner so he can be tried properly for his crimes, or do I take justice into my own hands and execute him on the spot? Choices like this impact your experience. If Eivor kills Rued, some of our friends might be unhappy, but if we let Rued live there is a good chance he could escape and seek revenge down the road.

“In every major story arc, we want there to be at least one major choice,” McDevitt says. “Those choices actually have ramifications down the road because you have these alliances that you've made. Those relationships need to be good for something, so at certain points in the story, you might have to call on those alliances. You'll see those friendly faces again, or some of them anyway.”

When it comes to Rued and his clan, you’ll have to wait until Assassin’s Creed Valhalla launches on November 17 to experiences the full fruits of Eivor’s alliances, but our time with Ubisoft’s latest open-world RPG left us excited for the full journey. Fans of Assassin’s Creed Origins and Odyssey likely already know what to expect from Valhalla, but Ubisoft has refined its formula and crafted another massive sandbox that looks to deliver on the Viking fantasy.

“You don't have to say much more than Viking to get people dreaming,” McDevitt says. “But it's our job to disabuse you of some of those dreams. Like, Viking’s didn't wear horned helmets, and even though they have a reputation for ferociousness, they were also settlers and explorers. They came to England, not to colonize England, but to settle down because they needed land … We want to go to the source and drag up all of the historical details and give you a complete Viking experience. It’s not just the big axes and the longship. Although that stuff is fun, too.”

For more on Valhalla watch our New Gameplay Today.