Windbound is an upcoming survival game with stylish visuals and exploration-focused gameplay. Ahead of the game's August 28 release, publisher Deep Silver and developer 5 Lives Studios have released a lengthy look at the game in action.

As protagonist Kara, Windbound has players scavenging for resources, fighting creatures, and sailing a ship between islands in a seafaring adventure. By watching the video above, you can learn more about how all of that works, as well as how the game is structured.

Windbound is releasing for PlayStation 4, Xbox One, Switch, and PC. 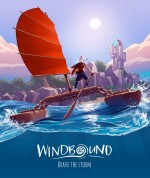