This holiday season's next-gen home consoles are sure to be an amusement park of games, so it's fitting that Frontier Developments is bringing its Planet Coaster park builder to both the PlayStation 5 and Xbox One.

The game was originally planned for just the current-gen consoles, and due to the addition of the upcoming system as well, the simultaneous release date is being pushed back to the holiday season.

Click here for Ben's review of the PC version from 2016. 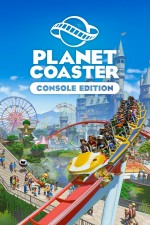