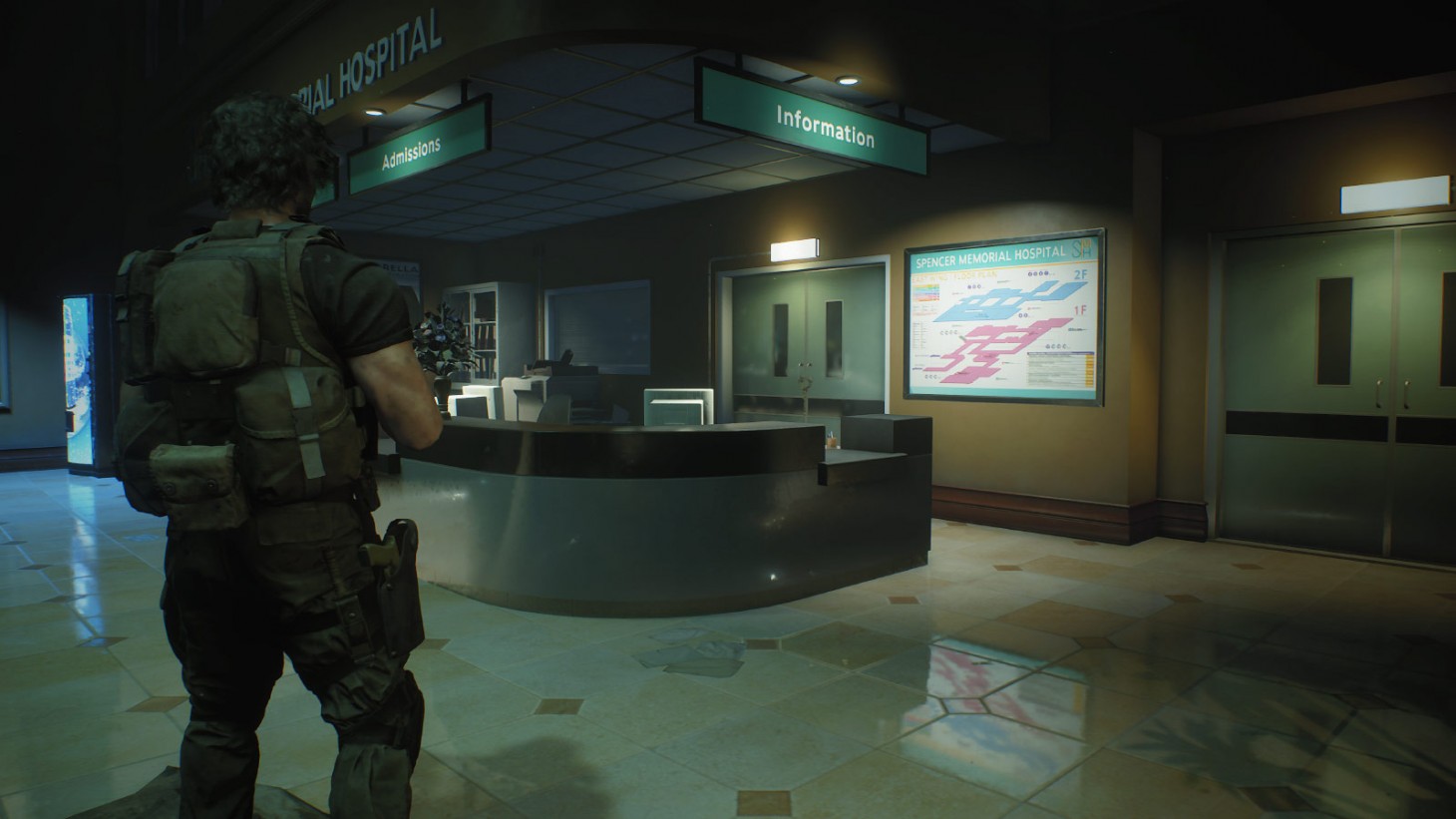 Jill is the main star in Capcom’s upcoming remake of Resident Evil 3, but she’s not the only survivor you control throughout the game. Carlos Oliveira is a UBCS’s heavy weapons specialist who meets Jill early on, and he becomes an integral part of the story. Since Carlos is working for Umbrella, Jill initially distrusts him, but the two survivors eventually form an uneasy alliance, and players even take control of Carlos about halfway through the game. For our Resident Evil 3 cover story this month, we went hands-on with a section within Raccoon City’s ruined hospital that features Carlos.

“If you look at the original design of Carlos, you could say that he had a more easygoing, almost playboy personality,” art director Yonghee Cho says. “We wanted to maintain his personality, but at the same time, make sure that the way he interacts with everybody makes sense, given the dire situation. In terms of the hairstyle, we went back to that easygoing nature. He's not going to be too concerned about that stuff, so we’re making sure that part of his character is intact.” 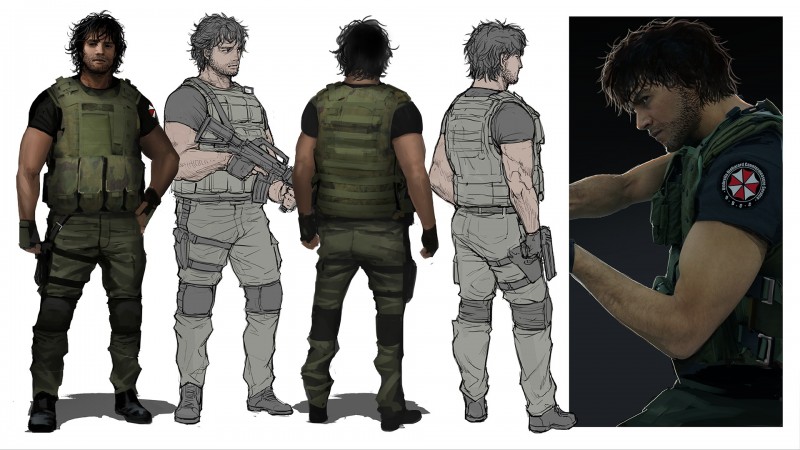 In the original Resident Evil 3: Nemesis, players take control of Carlos about halfway through the game as he races through a hospital to find a cure to the T-virus. Capcom asked us not to share the details of his mission in the remake, but we did get a good look at the hospital and were impressed by how much Capcom expanded the facility. The ‘90s version was simply a handful of zombie-infested rooms featuring a few puzzles. The remake expands the hospital into a network of interlocking rooms compete with several lock-and-key puzzles that slowly open new areas in a traditional Resident Evil fashion.

As I set off exploring the new hospital, I come across a set of lockers. Inside, I find a key that opens a whole new set of previously locked rooms. Later, I drop down into a courtyard where I find another useful item that opens other areas. Somewhere along the way, I pick up an upgrade for Carlos’ M4A1 carbine assault rifle that reduces the weapon’s recoil. Weapon upgrades like this are scattered throughout the game, but they usually require players to do some extra puzzle solving.

Amidst a scattering of healing herbs and ammo, I find notes that detail the horrors of the hospital staff leading up to the outbreak. One nurse talks about an influx of patients experiencing hyperphagia and limb necrosis. Resident Evil 3's atmosphere does a fantastic job of ratcheting up the tension even when you're not fighting enemies. 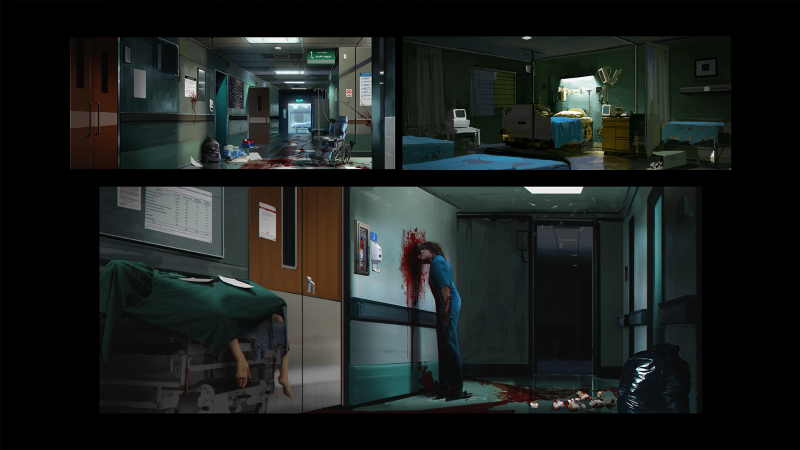 Inside a waiting room, I find a small horde of zombies waiting to eat my face, so it’s time to put Carlos’ dodge move to the test. Much like Jill, Carlos can dodge enemy attacks with a well-timed button tap. However, where Jill simple rolls out of harm's way, Carlos gets aggressive and shoves enemies to the ground. Not only does this dodge negate any incoming damage, but it neutralizes enemies for several seconds and buys me some extra time to line up a few headshots.

Unfortunately for Carlos, slow-moving zombies aren't the only enemies Carlos will encounter. As I move through the operations wing of the building, I catch a hint of a much larger creature: the Hunter Beta. Hardcore fans will recognize these lizard-like hulks who dart around the environment and slash at you with razor-sharp talons. For Resident Evil 3, the Hunter Beta has been redesigned and now looks a bit insect-like in addition to its lizard features. 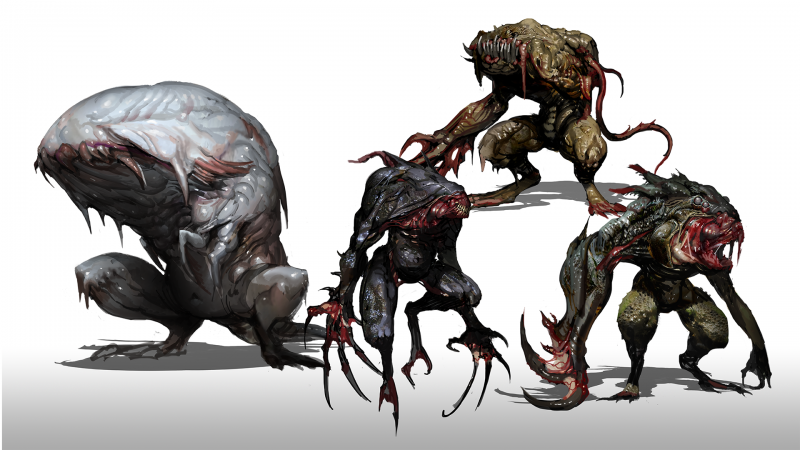 Various concept designs for different versions of the Hunter

“I wanted to make sure that it was clear that these are not naturally occurring adversaries,” Cho says. “These are manmade, artificial creatures. Specifically, with the Hunter, if you take a look at the original design, it has a much more humanoid look. This time around, we wanted the hunters to look almost beast-like, a little bit more feral.”

As I face my first Hunter Beta, I stagger back in horror. This feral beast’s claws are drawn, and its mandibles flicker eagerly, hungry for my flesh. He’s strong and fast, which is a deadly combo, and I unload nearly two full magazines worth of ammo into the monster before he finally collapses. The Hunter Beta is a fearsome foe even in a one-on-one battle, but Hunters will eventually hunt you in packs, which sounds truly unnerving. Carlos’ demo comes to a close not long after my confrontation with these creatures, but I know that more horrors await when Resident Evil 3 launches on April 3.