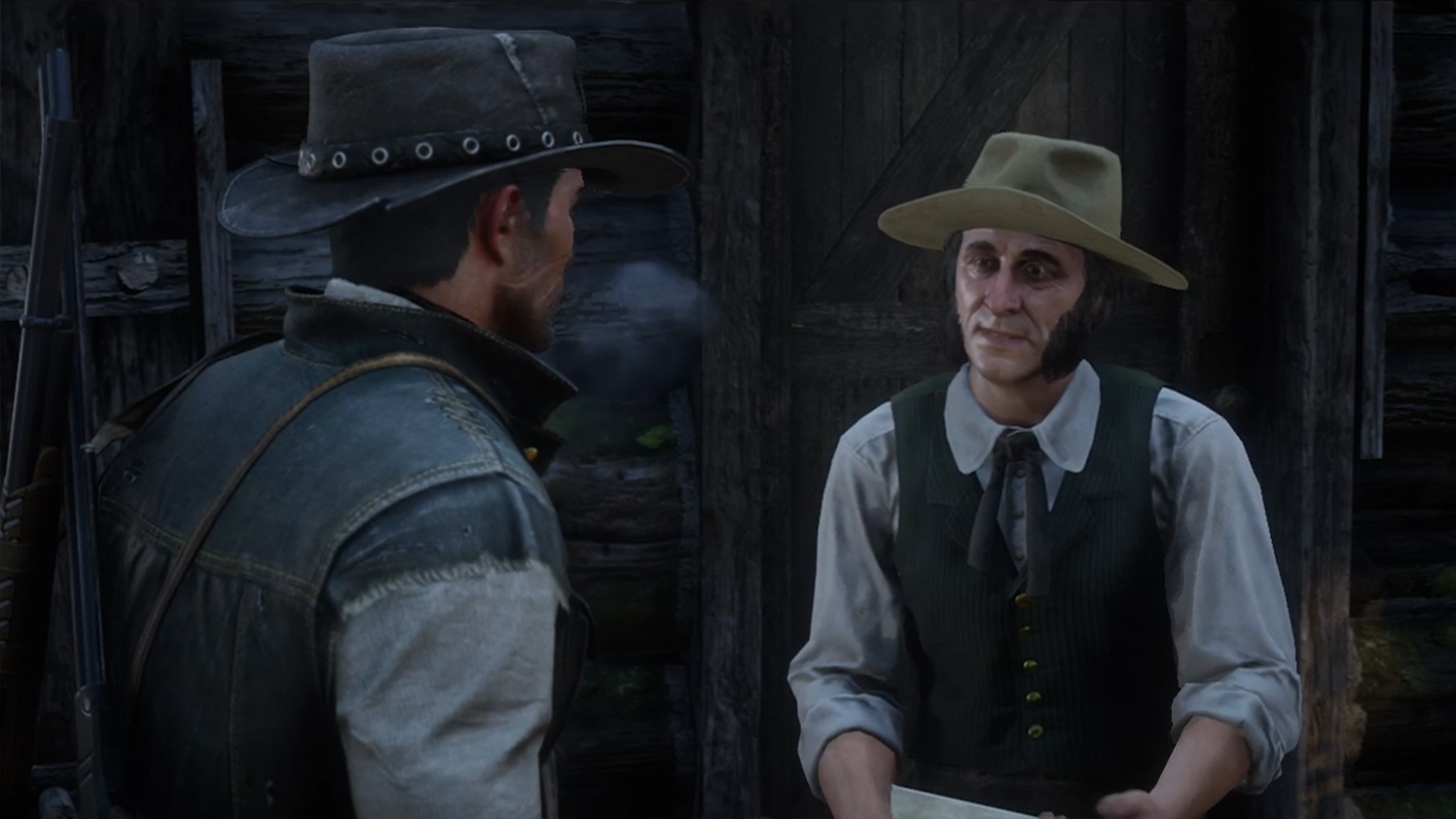 Five Moments You May Have Missed In Red Dead Redemption II

It’s been a year since Red Dead Redemption 2 surprised us all: The maturity, the subtlety, blew us away. We watched as one of the medium’s most multi-layered characters changed from belligerent badass to vulnerable hero (assuming the player guided Arthur toward the good path). What made it so moving wasn’t just the detail given to Arthur but the detail of the world. Join us as we look back at this monumental achievement, highlighting five easy to miss encounters that together encapsulate both Arthur's transformation and its significance.

Going into the game’s final act, Arthur looks to help people but doesn’t see himself as worthy of that same kindness. He writes:

“I don’t want saving. I don’t deserve it. I just want to help a few folk”

Enter Mickey, a war vet in Valentine who Arthur can run into from time to time. Their interactions are utterly mundane. Arthur says almost nothing to the rambling Mickey. He just lends him an ear – allowing Mickey to share his woes. It seemed insignificant but wasn't.
Their final interaction makes it clear; Arthur profoundly touched this man, just by listening.  By recognizing Mickey, Arthur gave him the courage to be honest for the first time, in a long time. Arthur did something kind, yet, he cannot respond to Mickey’s gratitude. Arthur is changing. He has changed. He just cannot acknowledge it.

Charlotte is a widow. Alone in the wilderness with no knowledge of how to survive, she is doomed until Arthur comes along. He teaches her how to hunt and fend for herself. She recognizes him as a decent man and invites him in for dinner. When Charlotte acknowledges Arthur’s decency, he enters a coughing fit. It’s as though his very body is trying to deny a truth he’s hid from his whole life. As the nun tells Arthur, in one of the game’s most beloved scenes, “That’s the problem. You don’t know you…whenever we happen to meet, you’re always helping people and smiling.” Being kind is in his nature. He can choose to be good and doing so means he is good. Finally, it begins to sink in. He later writes:

“Maybe I’ve Got Something to Hope For”

Woman on the Road

While exploring the wilderness outside Van Horn, Arthur stumbles upon members of the McMurphy gang. They’ve attacked a wagon and are preparing to assault a woman. Arthur steps in, saves her, and takes her home. She thanks Arthur, and he does not recoil. He doesn’t acknowledge it right then, but he did something selfless. A bit later he writes about it, the first time he writes about doing something good with no self-deprecation. He even draws her. 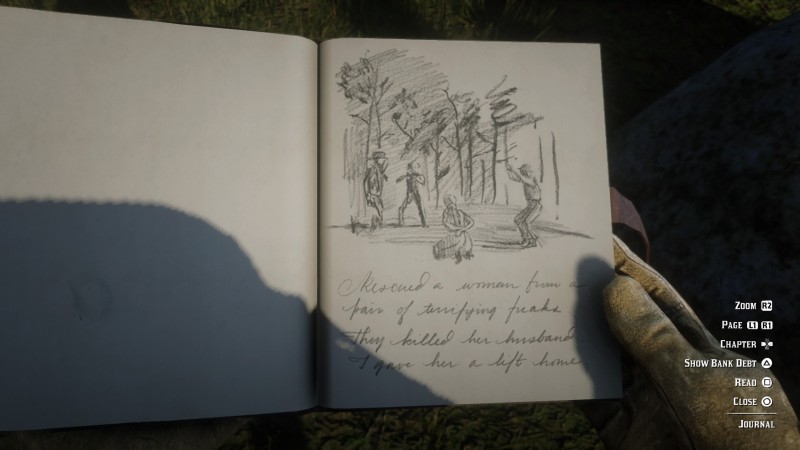 A Boy and His Dog

Passing through Strawberry, Arthur comes across a despondent boy who lost his dog. Arthur decides to help. After reuniting the two friends, Arthur lets go of his false identity and takes pride in his kindness. He is a good man and, for the first time, actively enjoys being himself.

In his final journal entry, Arthur pays tribute to his journey.

“I suppose every man has enough regrets to let him die happy. Just hope I did some good once I learnt to see the world for what it was. Ain’t my fault the process took quite as long as it did!”

Arthur recognizes his goodness even by the fact that he regrets – wishing he could’ve done better. He desires good deeds because he is good. This understanding is something emotional, not rational. A truth portrayed by a special character, Evelyn Miller, in one of the game’s most hidden side quests.
In the epilogue, players, as John, can find Miller, Dutch’s favorite philosopher. Miller advocates awe, proclaiming God’s presence in all nature. But he doesn’t see God within himself. He aims to reason to happiness.
Comparing Arthur’s last journal entry to the following quote from Miller’s final treatise reveals the significance of what Arthur learns.

“Oh, the lot of the fool, who aspires to be more. Ours is the most humiliating of burdens”

Unlike Arthur, Miller cannot connect with the love found in feeling. He is obsessed with man’s rational limitations. Miller wishes to quantify his experience, to articulate an answer to why he suffers. As we see, it’s an impossible feat.
Miller cannot see the irony. In trying to reason to an answer, he is caught in the very cycle he laments. Arthur found peace in his ability to act, in choosing to be good. He did not need to understand why he chooses; he just does.

For more on Red Dead Redemption II check out our review, reasons for giving it a perfect 10, and podcast where we discuss the recent PC release.