Details On An Unannounced Overwatch 2 Hero

All of Overwatch 1's heroes are coming back for Overwatch 2. As you read this, Blizzard is updating their looks for the new game. When I visited the development team in early October, they had 13 updated hero designs, with Doomfist being the last to go through the process. As the classic characters' appearances are altered, Blizzard is also working on new heroes. We know that Sojourn will be a playable hero when Overwatch 2 hits, and there's a good chance Echo will be too, but Blizzard still doesn't want to say whether she is or not. Whenever I asked the team about Echo, they used the word "mysterious" to describe her.

During my visit, game director Jeff Kaplan quickly walked me through a PowerPoint presentation that showed off Overwatch 2's new content. One of the slides he brought up was for new heroes. The image contained four silhouettes, none were immediately recognizable as characters that were teased in earlier concept arts, comic books, or any of the art we've seen. From what I could make out, three of the forms were female. This is just a guess, mind you, as the garments they wore made it difficult to know for sure. The character I believed to be male held a crooked staff, looking somewhat like a wizard, warlock, or voodoo priest.

The hero that stood out the most, and I couldn't take my eyes off of, appeared to be a female with short hair. At her side and standing up to her knees was a fuzzy little critter with pointy ears and an equally pointy tail. It looked like a fennec fox, but with longer ears and a more aggressive stance. The hero of note wielded a giant four-sided weapon, which is somewhat similar to the shuriken used by Yuffie in Final Fantasy VII, but much thicker. At first glance, this weapon looks like it's used for melee purposes, but given Overwatch is a science-fiction universe, I wouldn't rule out the possibility of it being thrown like a boomerang or attached to some kind of chain (which I didn't see). Regarding the animal, your guess is as good as mine whether it will be on the battlefield or not. There's a chance it could be summoned in like Bob for an Ultimate, or not be used at all like Bastion's bird Ganymede. Given how prominent it was in this artwork, I get the feeling this animal is used in some way. Imagine being able to tell it who to attack or pin down just by aiming at the foe. Again, this is all speculation, but from the silhouette alone, this looks to be one of the wildest heroes for the game yet.

Given how quickly Kaplan moved from this slide to another, I didn't get good looks at the other two characters, but they didn't stand out like the other two. I asked Kaplan if he could give me one word that describes any of the new heroes, and he responded with a quick "no." Blizzard doesn't want to talk about them yet, but I did get a rare look at four that will be coming to Overwatch 2, either when it launches or later down the line. 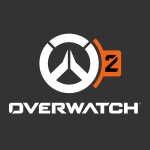