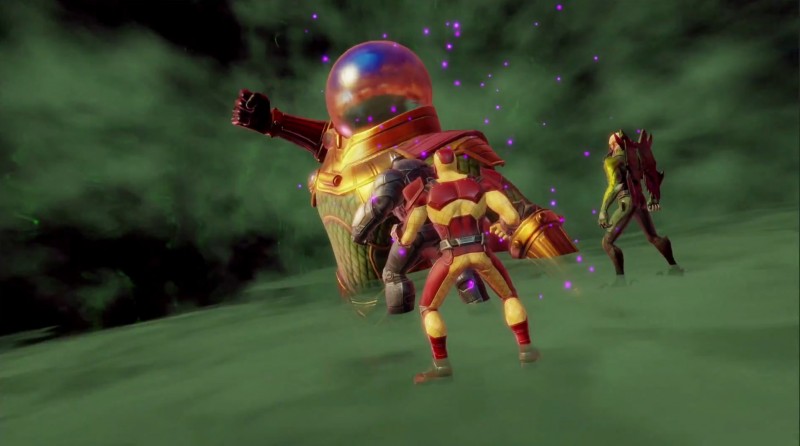 FoxNext's mobile game continues to grow its massive roster of collectible Marvel characters. We already knew Mysterio was coming to Marvel Strike Force, but details were scarce outside of a teaser gameplay video from the initial Sinister Six announcement last month.

This time, FoxNext went into detail on what players can expect when they unlock Mysterio. His basic ability, The Ol' One-Two, does significant damage to a single target, while clearing up to three positive effects from them. Master of Illusion, Mysterio's special ability, blinds its target and gains assists from allies, with an added ability block effect when used on a City Hero. Mysterio's ultimate ability, Smoke and Mirrors, sees the deceptive villain growing massive in size and delivering heavy damage and a heal block status ailment to all enemies. Meanwhile, Mysterio's passive ability applies deflect to himself and all Sinister Six allies, gives focus to himself and Spider-Verse allies, and summons powerful mirror versions of himself when he dies.

You can see all of these abilities (minus his passive effects) below.

In addition to this information about his abilities, we've also learned that Mysterio is a part of the Sinister Six in Marvel Strike Force, meaning he has strong synergies with the other members – Green Goblin, Rhino, Shocker, and Vulture – that have been added so far. This is best demonstrated in his passive ability, which buffs Sinister Six and Spider-Verse allies, as well as his special ability, which furthers the Sinister Six team's strengths over City Hero characters.

You can see a fully populated team of five Sinister Six members obliterate a City Hero team of the Defenders and Punisher below.

We still don't know when Mysterio is hitting Marvel Strike Force, but it could still be a ways off. The Rhino event campaign is wrapping up today, and we likely still have a Vulture event prior to Mysterio joining. FoxNext has also teased both Cyclops and Agent Coulson for future inclusion, so it's anyone's guess when the Spider-Verse trickster will join the roster. Thankfully, Marvel Strike Force provides plenty to do with its current roster, so the wait won't be completely insufferable.

For more on Marvel Strike Force, check out our interview with FoxNext's VP on the game's first year and the road ahead.