We were impressed with the on-the-nose Streets of Rogue when we played it, and now you can play the full game for yourself!

The trailer doesn't beat around the bush with its influences, saying "It's like Nuclear Throne meets Deus Ex, mixed with the anarchy of GTA. Rogue-lite meets immersive sim, and goes completely insane."

We would agree, having called it "a fascinating mess, in the best way possible." Check out our New Gameplay Today video in which we cause as much mayhem as possible.

Streets of Rogue is available now on Nintendo Switch, PlayStation 4, Xbox One, and PC. 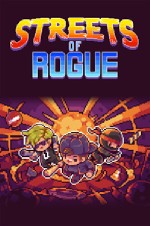