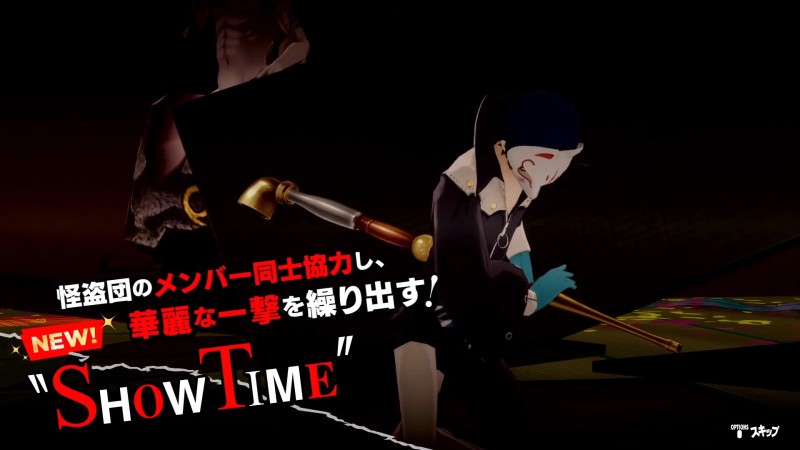 Shown first in the trailer is the full reveals of the team attacks shown in the character trailers that have been released so far. These team attacks, called Show Time, are powerful (and often a bit wacky) combination attacks between two members of your party. The Show Time attacks look amazingly detailed and hilariously brutal, and more are yet to come in further trailers.

Personas now have different traits, which are characteristics that add buffs to the personas. These traits can be combined and passed on through fusion, which can lead to more customization in creating your ideal persona. Along the lines of customization, accessories can now be used to grant skills to your party members, allowing them to learn attacks they may not learn through regular leveling. The trailer shows how accessories can be used to teach Ann, typically a fire mage, an ice attack.

Baton passes now have ranks, which means the more you stack the passes, the more powerful they become. If you successfully baton pass to each member of your party in one turn, the last character in line can use any move with no cost to HP or SP.

The new area, Kichijoji, has a few new places to increase your battle abilities as well as your bonds. Darts, a new activity, can be used to strengthen bonds, but also to increase their maximum SP. Billiards, a second new activity, can increase your technical attack stat. Kichijoji features a jazz club, a temple, and a Rag Shop, where players can exchange armor received in dungeons for other armor.

Finally, in response to a question from the community, Morgana confirmed that the main story of Persona 5 will remain largely intact, with the expansion simply adding a "new episode" worth of story content.

For more Persona 5 Royal news, stay up to date with our rundown of all of the characters trailers so far. Persona 5 Royal still has no confirmed Western release date outside of the planned 2020 window.