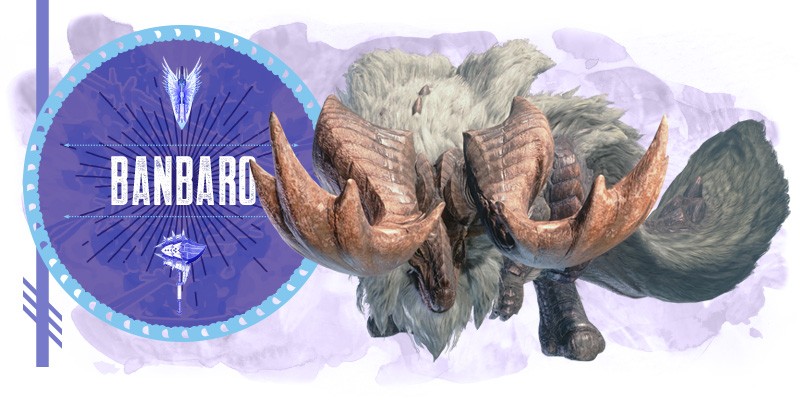 You might not immediately associate the words “herbivore” with “deadly,” but don’t let a creature’s diet fool you. Try yanking on a bull’s tail and ask how the hay’s tasting to see what I mean. Actually, don’t do that. Deadly herbivores are definitely a part of Monster Hunter World: Iceborne’s ecology, as you’ll learn today in our look at the Banbaro, a massive, elk-like bruiser with boundary issues.

Banbaro is covered with thick fur, which allows it to roam freely throughout the world of Hoarfrost Reach. “It’s able to inhabit much colder areas, but it does prefer warmer areas,” says Kaname Fujioka, the game’s executive director and art director. Because it is an herbivore, it very often moves between the caverns to the forest to find food. In relation to other animals, it travels in a much wider radius. That’s bad news for hunters, since Banbaro is fiercely territorial. If you get within this guy’s range, get ready for a scrap.

“Because it is highly territorial, we wanted to define it in a way that makes sense that it’s tangling with a bunch of other species,” Fujioka says. “We designed it in a way that not only does it appear in Hoarfrost Reach, but it makes sense to have it in other areas as well. Because it is a monster that’s going to come in conflict with so many other monsters, we didn’t want to make it overly complicated, so we wanted to make sure that the way that it attacks is very linear.” 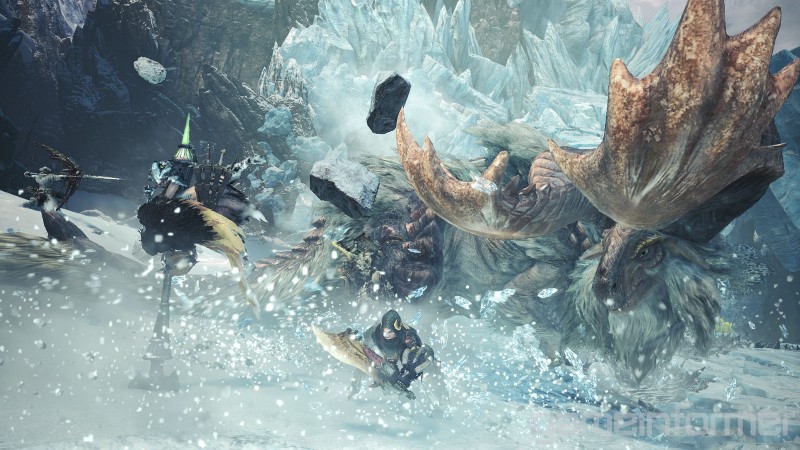 Fujioka’s talking about linearity in the sense that Banbaro fixes on a target and gets tunnel vision. From there, you’re essentially facing off against a hot-blooded locomotive. “It’s a very powerful physical monster,” Fujioka says, in what is most definitely an understatement.

Early on, the team had to work out exactly Bandaro was going to look like. They knew it was going to be a grazing animal with charging attacks, but they had to work through how to best manifest those ideas.
“We didn’t want to overcomplicate things,” Fujioka says. “You see further designs that focus more on it looking like a buffalo. Because we wanted it to be a monster that appears in multiple locations, we didn’t want it to just be focused on existing primarily in a cold, snowy environment, so we wanted to make sure that it’s an herbivore that eats any kind of wildlife. So we shifted the design with that in mind.”

Fujioka says they succeeded in coming up with a design for a beast that charged, but it didn’t feel as satisfying as it could be. Iceborne’s monsters are master-rank hunts, after all, so just making a shaggy Barroth wouldn’t be enough. “We wanted to give some unique flavor to it to have it be a little more punchy. Having the dilemma of wanting to add more spice to this monster, one of the concepts the designer came up with was how about using the horns to have it pick up various environmental things as it’s charging forward, such as bigger trees, rock formations – that was kind of the next step in the evolution of Banbaro.” 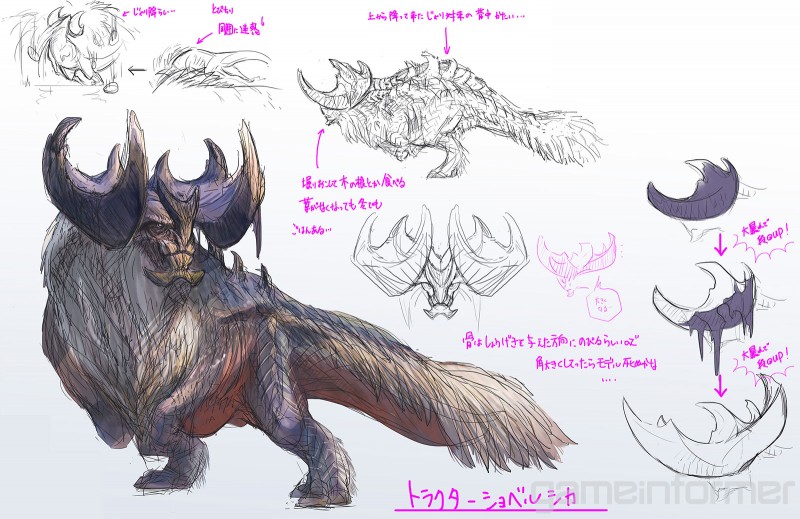 Banbaro’s gigantic horns are intimidating before they pick up debris. Once they’re filled with trees or other hazards, it’s hard to resist the urge to find somewhere else to be. “[W]hether it’s a rock formation or a bigger tree, that alters the attack radius or how much length it has when it’s attacking to give that motion a little more depth,” Fujioka says. “Now that we determined that was the right direction to take, the next step was to figure out what kind of horns can actually grab something and hold onto it. This was kind of looking at the horn design and figuring out what makes sense. After all of that conversation, this is the final design of Banbaro.”

I have to say, Banbaro’s armor ranks among my favorite, strictly from a visual perspective. “We based the theme of it off that of a dwarf,” he says. “If you look at just the general outline of the armor set, it’s the kind of silhouette you wouldn’t typically see in an armor set in Monster Hunter World. We wanted to envision a rounder silhouette to depict this theme of strength. For the female hunters, to have more of a cute look around the shoulder area.”

That inspiration goes beneath the surface level, with functionality that draws from some of the inherent qualities of the monster itself. “Because the Banbaro is an herbivore, we gave the armor set a skill where if you eat mushrooms you recover health faster.” Additionally, the set has some additional offensive capabilities to capture the monster’s overall charging spirit.

The weapons continue along a similar visual theme, incorporating the braided fur and, of course, those horns. The trick, Fujioka says is “making sure they give off that same flavor that you can envision this is the kind of monster this weapon came from.”