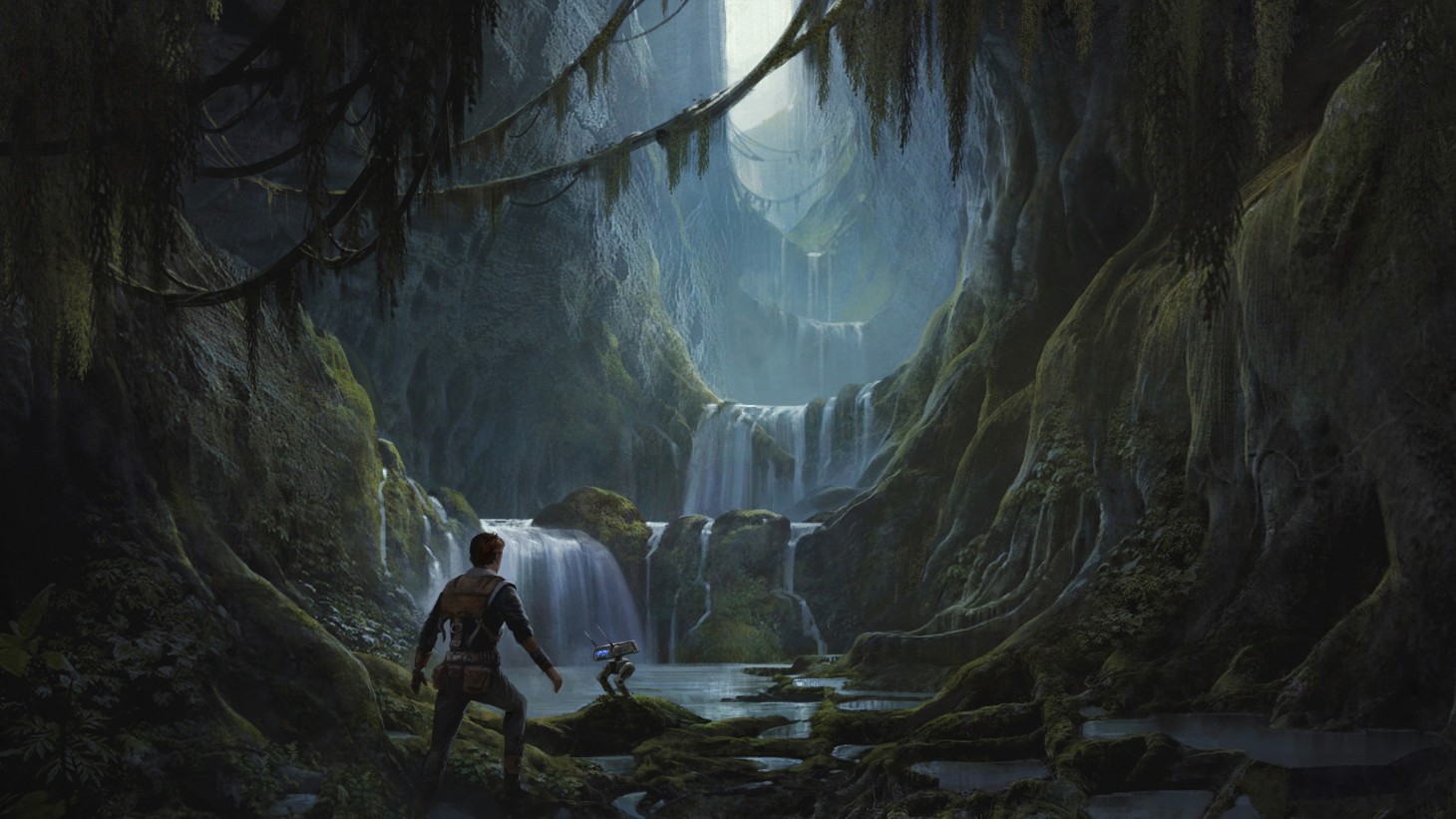 To gain the best understanding of the experience Respawn Entertainment is building for Star Wars Jedi: Fallen Order, you basically need to forget about past Star Wars games. Kill them if you have to. Certain elements that have become gameplay standards for Jedi-focused games still remain, like timing a button press to send a laser blast back at the stormtrooper that fired it, but the flow of combat and exploration are quite different than we’ve seen in a Star Wars title, and in fact have more in common with Metroid and Dark Souls.

The Metroid connection is exactly what you would expect. When protagonist Cal Kestis and his droid friend BD-1 explore a world, they may see areas that are out of reach or blocked by something. As the game unfolds and Cal and BD learn new abilities or are upgraded, they use new powers to open up previously unreachable zones.

Jedi: Fallen Order is a rarity among modern games in that it won’t feature an onscreen waypoint system for the player to follow. This means you won’t see a box or arrow that is always on screen, leading you to your next objective. Respawn wants players to embrace the adventuring mindset and find their own way to the destination. BD-1 can help by bringing up a holographic map that shows a three-dimensional recreation of the surrounding area along with highlighted destinations of interest. Unexplored terrain will be hidden in a fog of war. 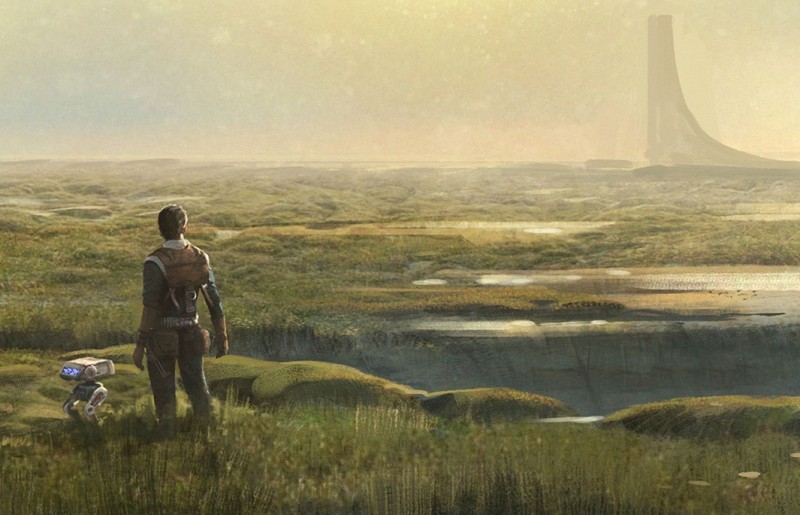 “We looked at the structure of Metroid Prime closely,” says Stig Asmussen, Jedi: Fallen Order’s director. “Early on, I looked at the cadence of getting upgrades in Metorid and we mapped that out. Ours in Jedi: Fallen Order is nothing like that, but it was a good exercise to go through. I think [Jedi: Fallen Order’s approach] will feel fresh; it’s not exactly like Metroidvania. We also looked at games like Bloodborne and Dark Souls that have the same types of methodology. We studied those games and they inspired us to find an experience that works well for our game.”

We saw the Metroid inspiration first hand in a gameplay sequence in which Cal upgrades BD-1 with an overcharge ability. BD uses it on a powerless machine to bring it back to life. Interestingly, the player tells BD when to set off the charge. Asmussen says having this power be interactive opens the door for timed puzzles and other gameplay types.

The Dark Souls connection is a little looser, but anyone who has played one of From Software’s games should feel comfortable in combat. Respawn didn’t want to make a button-mashing game or one that was overly acrobatic. Yes, the Jedi are capable of impressive physical feats, and Cal probably is too, but they are also strategists on the battlefield and deal with threats as quickly and methodically as they can. If they can make an enemy stumble and expose a weakness for a one-hit kill, that’s what they will do rather than unleashing a 50-hit combo.

As a result, the combat feels a little slower than other Star Wars titles, but ends up being more intense, as some of the best strategies are letting the enemy crowd your location. 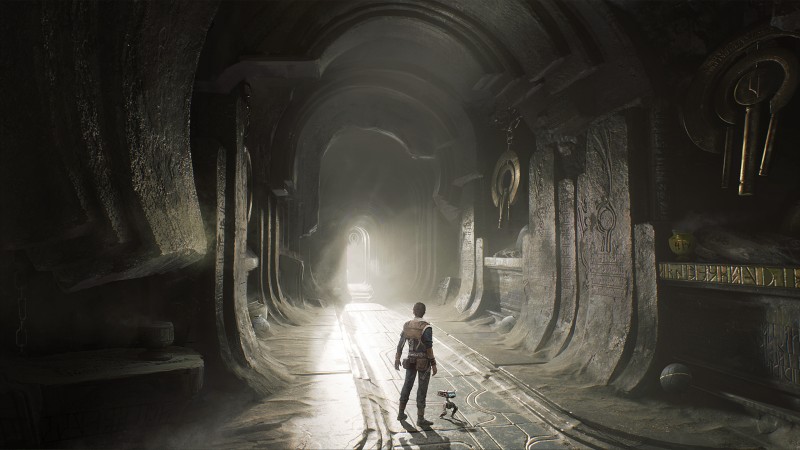 “We look at all genres, and all action games,” says Jason de Heras, combat designer. “Dark Souls, obviously, because it’s a very what-you-see-is-what-you-get kind of combat system. The main character has a simple tool kit, but it’s the enemies and world around them that makes it dangerous. It’s all about the player trying to read each enemy, figure out what the challenge is, what the different timings are, and react to that and have some strategy.”

When a trooper swings an electroblade at Cal, he can block it. Time this block perfectly and it turns into a parry. If you don't want the attack to land in any way, you can side step out of the way, or dive roll clear of it and hopefully reposition Cal behind his attacker. Cal can also swing his saber freely at the enemy with the hope of breaking his defensive meter, but must be mindful of both his stamina and Force power meters. The combat dance is similar to any of From Software’s Souls titles, yet ends up taking on a life of its own through the Force, which allows for sabers to be thrown, or enemies to be Force pushed off of cliffs. Cal also wields a somewhat unique Force power called slow that temporarily freezes an enemy or its laser blast in place.

BD-1’s healing canisters are basically the equivalent of Dark Souls’ Estus Flasks, which gives Cal a quick shot of life when his health is low. When the canisters are used up, that’s all you get until you can refill them at a save point. The save points, which give Cal an opportunity to mediate, also reset the enemies of the world. Throughout the game, BD will find materials that allow for additional canisters to be made. If the player takes the time to explore, the number of canisters can grow quite high, although you start the game with only two of them.

The big difference between the Souls games and Jedi: Fallen Order is the difficulty. Respawn wants its game to be challenging and intense, but not crushing or unforgiving. That means enemies won’t seem impossible or cheap. You may die against them, but not before giving them a good run.

The blending of ideas from Metroid and Dark Souls appears to work well. All of the Game Informer staffers who played the game at Respawn’s studio walked away impressed and wanting to jump right back in. Much like Insomniac’s work on Spider-Man last year, Respawn is in a position to give the Star Wars license the video game jolt it needs. A jolt that unifies almost everything we love about Star Wars – from the cinematics and soundtrack to the action and adventure – into a unique framework that blends elements from the best of yesteryear and today.