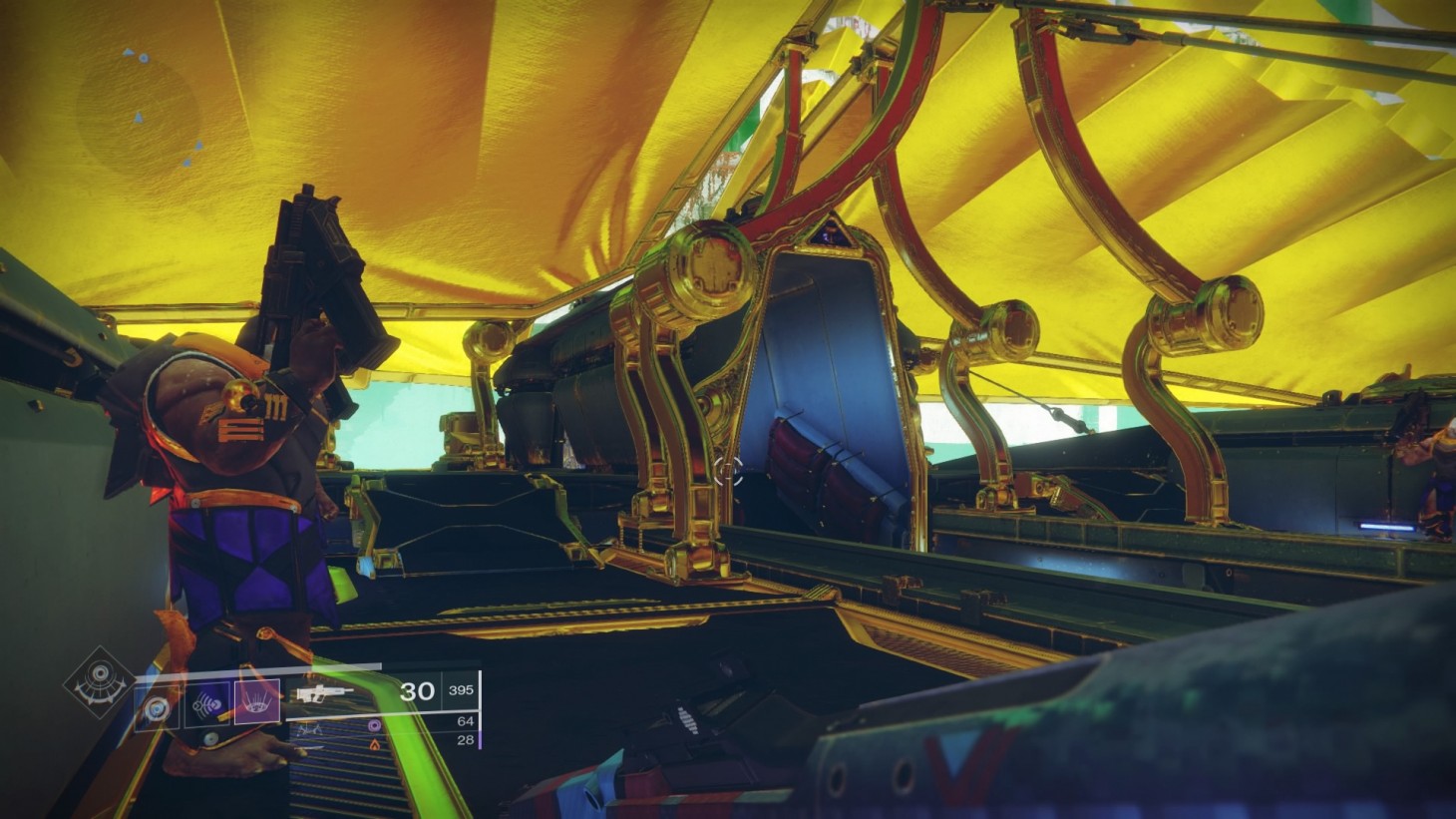 Destiny 2 has had a tumultuous year – both in-game and on the real-world business side – but that doesn’t mean it’s had a bad year. With its split from Activision now formalized, the content now rolling out likely begins to represent the Destiny universe specifically as Bungie hopes to present it. The latest addition to that world is the Season of Opulence, a not-expansion that nonetheless offers a new helping of content for season pass players to explore. Like the Drifter and Forge seasons that preceded it, Opulence focuses squarely on content for the initiated, dedicated player. And while there’s a mix of good and concerning elements in these first few days, the experiences on offer are well worth checking out for veteran Guardians.

Season of Opulence circles back to the storyline of Calus, the Cabal emperor who has been playing games and hatching machinations with our hero character since the launch of Destiny 2. Specifically, we’re now chasing treasure across the solar system, partially for our own enrichment, and in part for the entertainment of Calus. One of the standout elements of Destiny 2 since the launch of Forsaken has been the focus on deep lore, and there’s some great stuff on offer here if you take the time to read it as it unlocks; there's an especially fun “future history” of Calus’ interaction with our Guardian that heralds the end of the universe. However, like most of the season pass content from this year, I’m left a bit underwhelmed by the actual in-game story beats. Without discrete new story missions or strikes, or even a true guiding purpose to the treasure-gathering, everything here feels a bit hollow, especially in comparison to previous epic encounters with the likes of Crota, Ghaul, or Uldren. Moreover, I find myself increasingly distanced from a sense of character agency for my hero. Like in the Forge and Drifter seasons, it feels like my Guardian is just being shepherded along to the next shiny object, chasing new gear without a particularly clear reason why. I miss the sense of epic heroism and purpose that defined the early years of the franchise.

The opening quest line for Opulence doesn’t help to alleviate those concerns, as it takes you through a rote series of brief tasks that are largely forgettable. However, that “Invitation” questline does open up an interesting new twist on play. The Chalice is a new tool that lets you guide the shape of certain rewards that will be coming your way, and it can be upgraded to offer greater specificity in the details of those pieces of armor and weaponry. I dig this concept, and the way it allows players to customize their loot in meaningful ways (with a bit of work). I’d be very happy to see Bungie expand the concept to other arenas.

The Menagerie is the place where you’ll go to try and win those rewards you’ve designated on your Chalice, and it’s this activity that is certainly the most rewarding and unique piece of content we’ve seen in-game in some time. A matchmade six-person activity, the Menagerie could be thought of a bit like a “raid-lite” experience. Over the course of several surprisingly different encounters and environments on board Calus’ Leviathan, you’ll work your way up toward a boss fight while engaging in a mix of combat and straightforward objective completion. In one encounter, you’ll need to run into a toxic cloud to snag an orb and slam it back into your home base. In another, you’ll need to kill certain enemies to gain a laser that is uniquely suited to breaking a particular type of crystal. The battles are frantic and smartly paced, and interspersed with brief periods of wandering a maze-like substructure. The Menagerie offers an ideal way for solo or small-group players to get the feeling of larger battles, but without the extreme challenge and organization required by a raid. In terms of complexity, the Menagerie’s varied encounters and locations make for a much more engaging activity than many other recent similar in-game experiences, such as Escalation Protocol or the Forges. Like the Chalice concept itself, I’d be especially pleased to see the developers iterate further on the ideas presented in the Menagerie; it’s great fun, and I’m eager to see what other bosses and heroic variations are on the way in the coming weeks.

I have to withhold too much evaluation for the new raid, Crown of Sorrows, as I’ve yet to finish a full run myself. With that said, what I have seen suggests a continued thread of excellence from the raid team that has remained largely unbroken since the original Destiny’s launch. Destiny’s raids offer a unique high-level cooperative activity and imaginative design that is unmatched in the industry, and Crown of Sorrows exhibits the same mix of innovative mechanics and challenging encounters we’ve come to expect. I like the way that the larger six-person team is forced to break down into smaller two and three-person groups, and then coordinate and shift responsibilities throughout the encounters in order to find success. 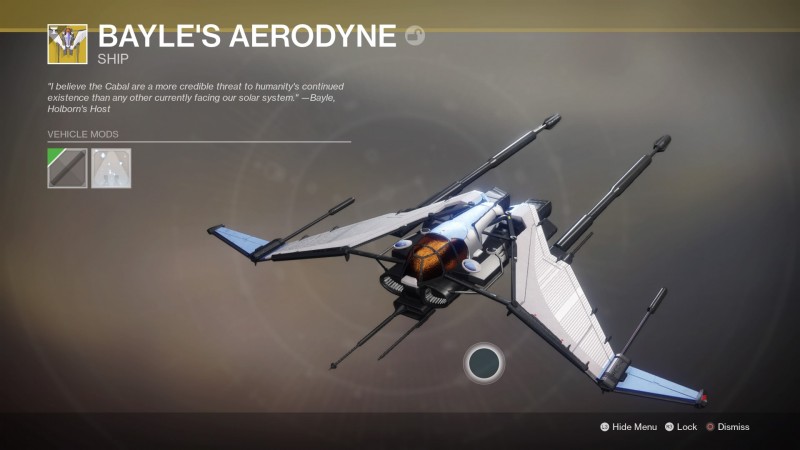 A bevy of new cosmetic ships and other items are available this season, but they are now almost entirely reliant on real-money purchases

Bungie has adopted a staggered release approach to much of its content, so we're expecting more in the coming weeks, including a couple of exotic quests, additions to the Menagerie, and what I’d guess may be a few surprises, given the team’s recent modus operandi. As such, there’s not a lot of other brand-new content on offer for players in this first week, though there are some new things to take note of. For instance, the long-awaited appearance of the Gunsmith bounties is certainly a welcome respite from the shortage of enhancement cores and weapon mods, and it’s the first time in a long time that I’m going to see Banshee every day again.

I have much more mixed feelings about the dramatic rework of the Eververse store. It’s clear Bungie is putting in some work here in advance of some big changes coming later this fall, and the new user interface is cleaner, more welcoming, and better organized. However, it’s hard to praise some of the more behind-the-scenes decisions for this real-money storefront. This season’s earnable engrams only reward a “best of” engram with items from previous seasons. If you want any of the new ships, armor, ornaments, or other goodies, you’re now effectively locked in to spending real money to get them. It’s disappointing and immersion-breaking for me. I often think about how much more exciting the loot pool might be if some of these items were integrated into the broader game. While cognizant of the realities of monetization, every year has seen Bungie move further down the road toward this business model, and I’m not a fan of the direction it’s going, especially in a product that is (as of now) still a premium, pre-paid game. 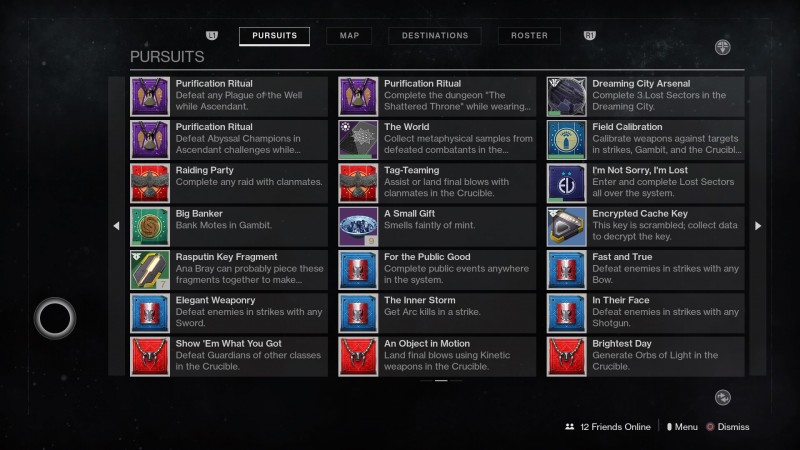 The new Pursuits tab is too utilitarian for its own good, and fails to surface active projects in a meaningful way

Finally, on the user experience side, I have to mention that the new Pursuits tab, located in the Director, feels like a utilitarian solution to a problem that Destiny has struggled with almost since its inception. And while I admire that the team is still trying to work out the best approach, I can say with some confidence that this isn’t the right answer. Bounties, questlines, and other active points of engagement (like the Chalice) all swim together in a hard-to-read mix of rectangular blocks, and I regularly become lost trying to identify where a particular project is described, and what it means that I’m working on it. In an epic RPG experience, players should feel driven not just by the acquisition of loot, but also by a sense that their characters are on important tasks that move the story and the world forward. The current Pursuits tab doesn’t contribute to that sensation, and I hope Bungie keeps exploring alternate options.

It’s impossible to fully evaluate a current season of Destiny 2 in its first week, since so much of it is built around a gradual roll-out. With that acknowledged, the big takeaway is that seasoned players will find a couple of solid and exciting new activities to engage with this spring and summer, along with a return to the familiar “powerful engram” grind that has been guiding their play for a long time now. New and returning players would be forgiven for feeling a bit lost at sea at this point; Opulence does little to help you understand what’s happening or why your character is doing what they’re doing. Even so, returning players who brave the waters will be happy to receive some power surge items as part of the initial Opulence questline, which should do wonders for helping you to catch up with your friends and get into the good stuff.

Bungie spent yesterday announcing a slew of exciting features on the way to Destiny 2 this fall, from a new standalone expansion to a free-to-play core experience. In advance of that, Season of Opulence aims to keep the ship moving in the right direction, but does little to dramatically change the view from the bow.