The movie, based on the children's book, which had a sequel in 2017, which was about a board game, that turned into a video game, is getting a video game adaptation. The game is being described as an "adventure in laughter" that will offer cooperative play for up to four players as they look for jewels while avoiding marauders and exotic creatures. The game is coming November 15 to PlayStation 4, Xbox One, Switch, and PC.

Jumanji: Welcome to the Jungle was one of those weirdly successful movies that exceeded all commercial expectations and a sequel film was quickly greenlit. It's rare to see licensed games like this in 2019, especially ones that appear to have acquired the likenesses of the actors in the film. 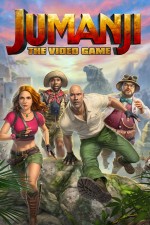