Hi-Bit Studios is releasing a game based on the arcade feel of the '80s. You've probably heard that one before, but this one mashes up just about every '80s genre you can think of.

The trailer for 198X shows off several distinct playstyles. It's part brawler, part RPG, part racing game, part action game, and part shoot-'em-up, and it looks to have a consistent storyling through all of these styles, telling a story that highlights its '80s inspiration.

If this looks like something you're into, you won't have to wait long; the game is coming to PlayStation 4 and Xbox One on June 20, with Switch and PC versions "coming soon." 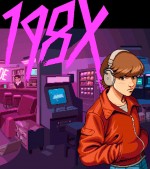