Brothers: A Tale Of Two Sons Is Coming To The Nintendo Switch Very Soon

Brothers: A Tale of Two Sons has been available for nearly every platform imaginable since its launch in 2013, and now it's coming to Nintendo's latest console. Directed by Josef Fares, the action adventure title tells the story of two brothers going on an emotional fantasy journey.

Exclusive to the Switch version of the game is a new co-op mode, where each player controls one brother with one Joy-Con. In all previous games, the player would control both brothers with each analog stick, an option that also returns for the Switch version. The game will also feature director commentary and a concept-art gallery, both of which were also present in the PS4 and Xbox One versions.

Brothers will run at 30 FPS, with a 720p resolution in handheld mode and 1080p resolution docked. The game has previously been available on PlayStation 4, Xbox One, Xbox 360, PlayStation 3, iOS, Andriod, and PC.

The game lands on Nintendo Switch next week, on May 28. The game retails for $14.99, but there's a 10% discount for those who pre-order. For more on Brothers, check out our review for the game, or Fares' subsequent project, A Way Out. 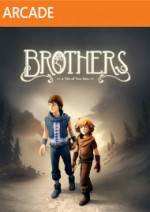