Beat Saber is crossing the mostly-arbitrary threshold between early access game and full release next week, but that does include one major new feature: A level editor.

In a blog post on its official Steam page, developer Beat Games says the timing of the shift is due to a number of reasons. The addition of the new level editor, which lets users import their own audio tracks into the game, add gameplay to them, and play them like they would the included tracks, is the big one. Unfortunately, this feature will be PC-exclusive; the PS VR or the Oculus Quest version of the game, due to Sony's regulations on PlayStation and Oculus Quests' mobile nature, the developer later confirmed on Twitter.

The move out of early access is also because since the game first launched in early access games, Beat Games says they've released all the features they wanted to include, and the game is fairly stable across all platforms. Speaking of platforms: Beat games also announced they are unifying development of all versions of Beat Saber (PS VR, Steam, and the Oculus store) as of next week.

None of this means Beat Games is finished with Beat Saber, however. The studio plans to release more tracks, both free and paid, throughout 2019, and work with the community to introduce new features for a while yet.

To see how the game fared during its initial release on PS VR, make sure to check out our review. 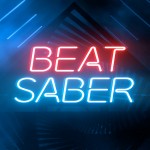