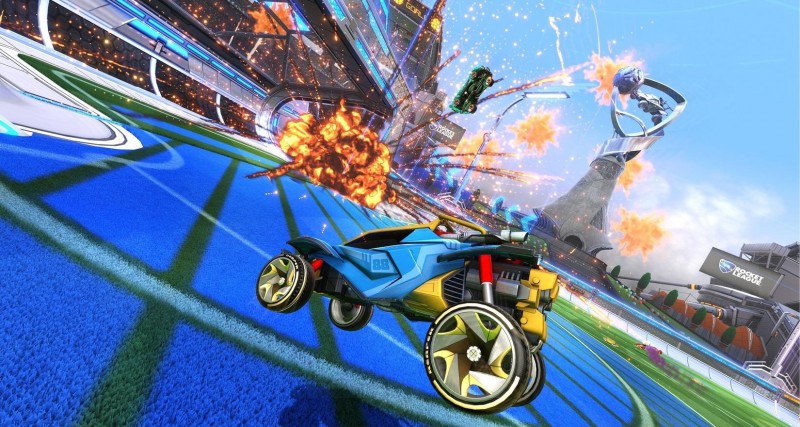 Update (7:40 p.m. CT): Epic has clarified again that, despite the previous statement, no decision has been made about Rocket League being sold on Steam. They only state that they will continue to support existing Steam purchases for the lifetime of the game.

Update (3:03 p.m. CT): Epic has confirmed that Rocket League will still be supported on Steam, but will no longer be for sale once it launches on the Epic Games Store.

Psyonix, the developer behind the shockingly successful Rocket League, announced today on their website that they will be "joining the Epic Games family," which is another way to say that the studio has been acquired by the Fortnite developer and company behind the Epic Games Store.

The announcement was made on Psyonix's website today in a rather jubilant post for an acquisition. It also has a sense of self-awareness, pairing the post with a set of questions that they expect fans will have about this deal. Pointedly, the first among them is an obvious question: "What does this mean for Rocket League?"

"In the short term, nothing will change at all!" the answer starts. "We’re still committed to providing Rocket League with frequent updates that have new features, new content, and new ways to play the game for as long as you’ll have us. In the long-term, we expect to bring Rocket League to the Epic Games store and to leverage our new relationship to grow the game in ways we couldn’t do on our own before. We believe that bringing Rocket League to new audiences with more support is a win for everybody."

In terms of how this benefits both partners, Psyonix can likely expand their esports suite with Epic's rather intensely large war chest. Epic, similarly, can use the relatively scrappy and successful Rocket League esports league expertise to bolster their own efforts with games like Fortnite, which has seen some missteps in the competitive arena with increasingly indignant players.

While the assumption might be that Epic is going to take over Rocket League and only provide it on their own store, instead of rival store Steam, it does not appear this is in the cards yet. The blog post makes no mention of it, but it also doesn't seem to outright say it is not happening. We have reached out to Epic Games with this question but did not hear back by time of writing. [See update above]

As of right now, at least, Psyonix is doing their best to reassure Rocket League fans that nothing is changing with their game.