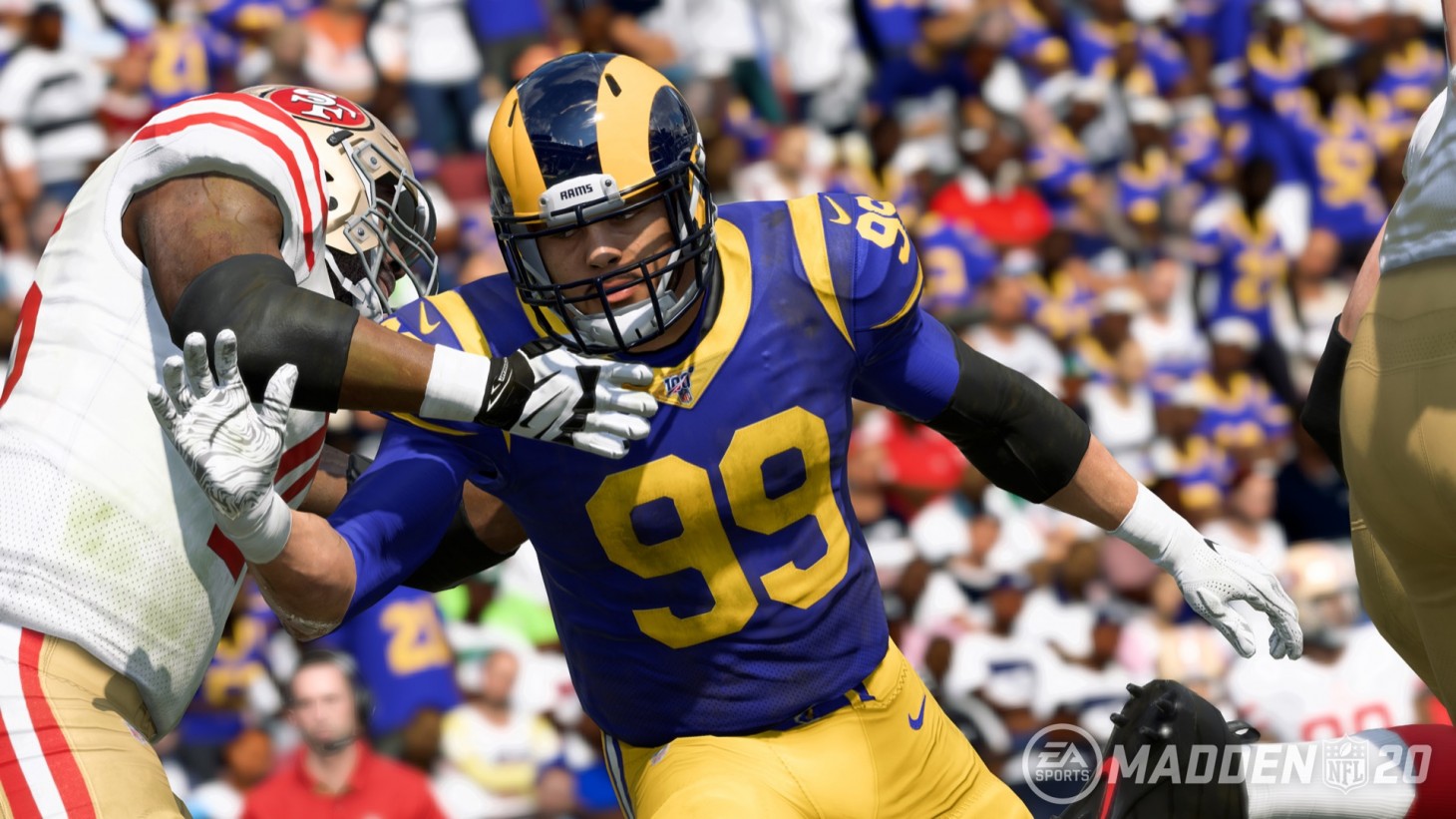 This console generation hasn’t been a great one for fans of sports franchise modes. While the dominant NBA 2K series continues to explore meaningful innovations in the space with new concepts like a GM story mode, persistent injury systems, and deep customization tools for MyLeague, the rest of the sports games have largely sat idle with decaying, dated systems. Madden has been one of the guiltiest parties when it comes to stagnation. Outside of a few scouting and progression updates, EA Tiburon has been largely content to let this mode idle while committing more resources to the lucrative Ultimate Team mode and prestige Longshot story mode. For NFL fans longing for major leap forward in franchise play, if it executes on its concepts Madden NFL 20 could be the first step toward realizing that dream.

“It's the most interesting year-round sport in my opinion,” says Madden NFL 20 creative director Mike Young. “We care about it all year long, and there are phases of it. [With Madden NFL 20] we want to bring to life the ability to have decisions that can impact your franchise based on how you handle personnel, morale, teammates, and employees. That just wasn't in Madden at all. It felt like a stats management game only.”

To dig Madden’s franchise mode out of its self-dug rut and realize this ambition, Tiburon has brought a group of franchise mode enthusiasts from the community on board, like Franchise Nation’s Andre Weingarten. This strike team works not only to freshen up pre-existing systems like trade logic, free agency, and scouting, but also to help develop the Scenario Engine, Madden 20’s instrument for recreating the dramatic storylines that drive headlines all year round in the NFL.

Creating an impactful narrative experience in a franchise mode isn’t as easy as writing a linear story. Though you can use that format to great effect for a shorter experience, franchise modes are dynamic systems that deliver dramatically different results based on the decisions the user makes. You can’t predict what players are going to do, but if you identify the individual elements for a good story, you could conceivably develop a software underpinning that mix and match these elements to generate a series of moments that feel in line with the stories that emerge out of the NFL every week.

“When we looked all year at storylines like Le'Veon Bell's holdout or Antonio Brown demanding a trade, we really didn't have anything in Madden right now to bring leadership and managing the locker room, and personalities, and cohesiveness that's needed on a football team either from a player perspective or a coaching perspective,” Young says. “The Scenario Engine is intended to create dynamic storylines week to week based on how you're playing, who you are, your record, your stats, and the personalities around you. It fires off stories that could be one-week stories, but there are also several storylines that are branching.”

To achieve this goal, EA Tiburon essentially reverse engineered major and minor storylines from the last seven years, finding compelling scenarios that could challenge players and looking at the inputs that would be necessary to trigger these circumstances in a franchise playthrough. If a star player found out he was placed on the trade block, how would he react? If you cut ties with a future Hall of Famer in favor of a hotshot rookie, what would that do to the locker room?

Recreating these scenarios required the creation of a personality system that gives the players some degree of agency. Team players like Julian Edelman may be more likely to take roster disruptions and drops in their usage rate in stride, but more volatile personalities may trigger crises that coaches/general managers need to resolve. Some of these may be gameplay based. If a talented receiver like Martavis Bryant is frozen out for three games, he may demand you get him the damn ball. If you don’t, maybe he demands a trade.

The offseason presents dynamic obstacles to overcome as well. “If you franchise tag a guy, there should be a risk that he'll just retire or demand a trade,” Young says. “You should feel that weight when you are making these choices instead of sorting a spreadsheet and going, 'eh, he's not that good.' There's got to be a risk/reward to this stuff to really make you feel the immersion of it.” If you’re the type of GM who doesn’t like surprises, this may affect how you approach drafting. Maybe you’ll pass on a temperamental player with more potential upside just for the peace of mind knowing that your pick won’t lead a revolt against your leadership.

Madden NFL 20 has several scenarios like that that can arise on the fly and give you player boosts or small goals with meaningful rewards. If your team is struggling, perhaps a locker room leader calls a player’s only meeting that gives a boost to the position group you think needs the most help. If your team has a short week, you can decide to push them to practice to earn some more XP, or give them time off to boost morale. If a young player has a good game, you may trigger a “breakout player scenario” that issues a specific goal for the next game. If you meet it, then the player could earn a dev trait increase mid-season, jumping his trait status from normal to star.

The Scenario Engine is flexible enough to incorporate more variables as Tiburon sees fit. “One thing we're really excited about is planning to add content throughout the year,” Young says. “This will be the first time we've ever done updates to franchise throughout the season.” 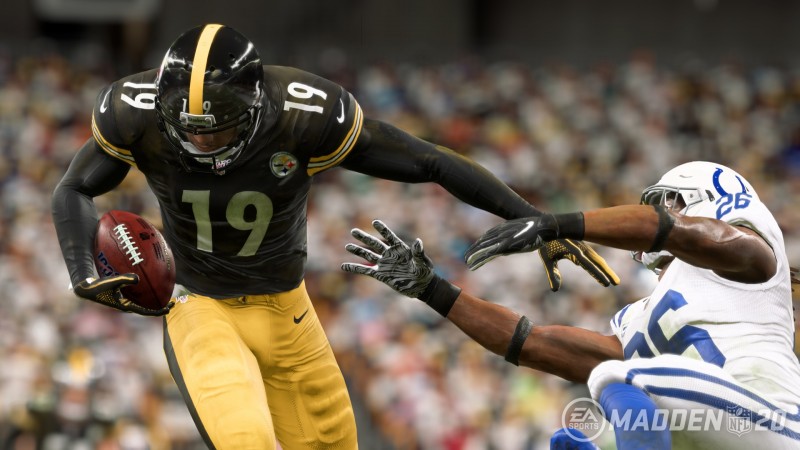 Last year’s major new franchise mode feature was the scheme fit system, a crude and ultimately unsuccessful attempt to replicate the idea that certain players perform and develop better in certain offensive and defensive schemes. Aspiring to capture this dynamic in franchise mode was admirable, but the execution left a lot to be desired. Not all the schemes and their required archetypes were reflective of the real-life teams, and you couldn’t alter the archetypes for specific positions to better fit the scheme you wanted to employ. Making matters worse, star players who were dynamic enough to excel in several schemes wouldn’t receive the scheme fit XP boost if their top-rated skill wasn’t scheme-fit appropriate. This system isn’t going away in Madden NFL 20, but EA Tiburon hopes to smooth over the roughest patches.

The development team revisited the archetypes associated with schemes from Madden 19 in hopes of providing more flexibility in how teams can be built, and the reduced the XP bonus associated with scheme fits. If a player is not a scheme fit, then their progression will be slightly slower but it will “no longer feel crippling.” I’m not sure this addresses the underlying issue with the system, but we won’t know for sure until we spend more time with it.

Madden NFL 20 finally brings run-pass option to the game, which also necessitates the creation of some new scheme types. This year’s game introduces three new offensive schemes to the mix. The West Coast Spread is all about keeping defenses on their toes with quick-strike horizontal passes. This attack also opens up running lanes for quarterbacks. The Pistol is a shotgun-based formation that allows attackers to target the weak side of the field with runs or passes. Air Raid is a pass-heavy no-huddle system that requires the quarterback to make quick adjustments at the line of scrimmage.

Madden 20 also tries to inject more variety into the defensive systems with four new schemes. Coaches who want to slow down attacking offenses can employ the 4-3 Cover 3, which is designed to only allow small gains. Teams who want to pressure the quarterback can try out the 3-4 Storm scheme provided they have speed up front and linebackers who can jump passing routes. Another counter to spread offenses is the 4-3 Quarters, better known as Cover-4. The last new scheme is 3-4 Disguise, which is predicated on confusing the quarterback with symmetrical lineups and disguised concepts. 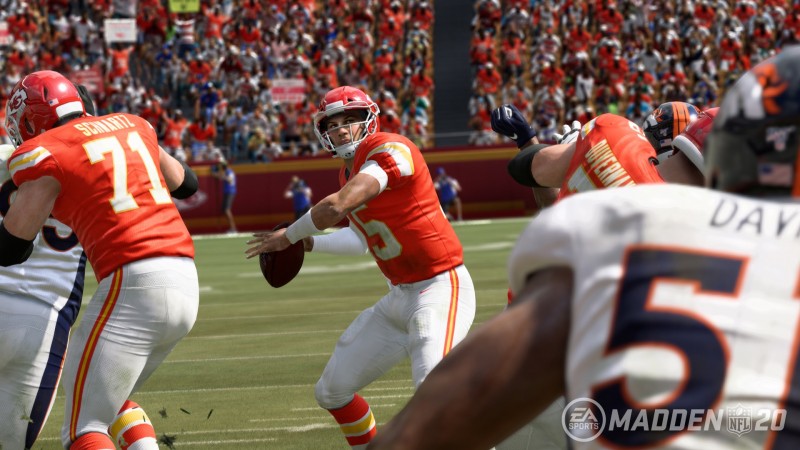 For too many years, there has been too little player differentiation when playing CPU opponents. Whether you were squaring off against a future hall-of-fame quarterback or a shell-shocked rookie, chances are they would complete a high percentage of short yardage passes and rarely do anything that mimicked the ability of their real-world counterparts.

“I feel like with franchise, a lot of people just like to play against the CPU and try to crank out Super Bowls and get to the draft and they don't enjoy playing other people, but it felt like week-to-week there wasn't a difference between who you played,” Young admits. “You weren't really that scared about playing Tom Brady and the Patriots.”

This could change with the addition of superstar skills and X-Factor players, which we explore in great depth with this feature. This new pool of more than 70 new abilities isn’t meant to make Madden play like NFL Hitz, but rather accentuate the unique capabilities of the league’s star players. Patrick Mahomes now has unique animations that let him escape the pocket more quickly than his counterparts, as well as new abilities that raise his accuracy throwing on the run and across his body. Tom Brady can diagnose the defense quickly and find the first open target much faster than other quarterbacks. Ben Roethlisberger has a deadly pump-fake that can disrupt your coverages and spring his receivers open.

The same goes for the other side of the ball. If EA Tiburon succeeds in its goals with this new system, you won’t be able to simply ignore studs like Khalil Mack or Aaron Donald anymore.

The Future of Franchise Mode

Though I still have questions about the scheme fit system, the Scenario Engine and superstar abilities sound like promising steps in the right direction. But will EA Sports continue down this path moving forward, or reverse course and chase a different feature set next year? That danger always exists with sports titles, but Young says he has no plans to neglect franchise mode next year.

“Franchise has come back to being a big focus on the game and it will continue to be,” Young says. “We just want to add this rich depth and immersion to it so we're starting to think about it more like a sports RPG.”

Madden NFL 20 ships for PS4, Xbox One, and PC on August 2. To learn more about the game, read our in-depth breakdowns of the superstar skills, our discussion about how EA plans to clean up the gameplay bugs from last year, and the new Face of the Franchise career mode. 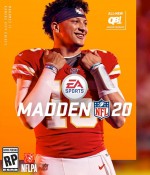