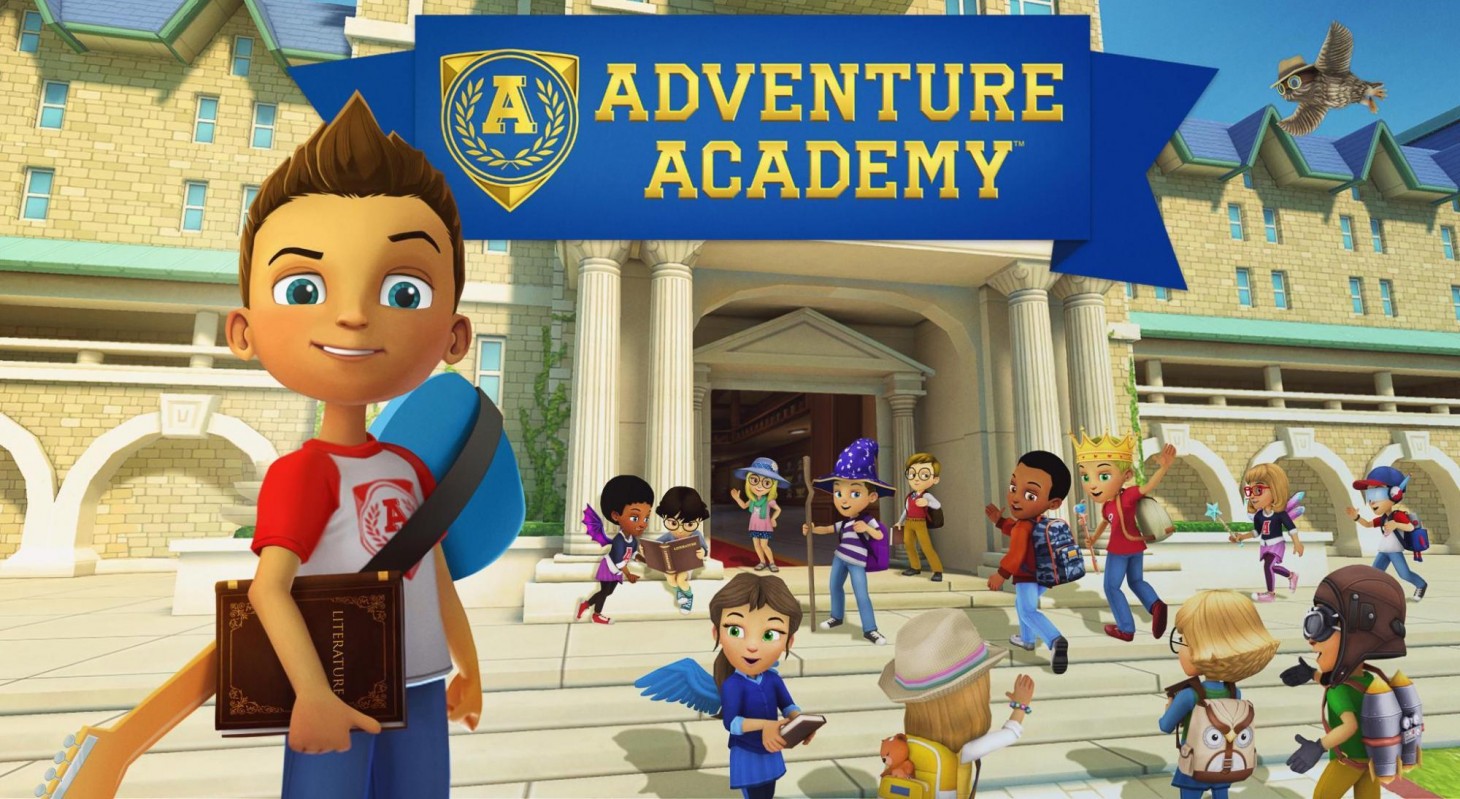 Adventure Academy Is An Educational MMO Teachers And Students Will Love

As an elementary school student, I loved computer class for the video games our teachers worked into the curriculum. One game taught me typing skills. While we played, our teacher covered up our keyboards with orange, plastic slips that shrouded the keys, but when she wasn’t looking, I would lift the slip to peek underneath, giving me an edge over the other students on the leaderboard. Playing these games, and the competition that spawned from them, gripped me much more than sitting in a classroom, listening to a teacher drone about math and geography.

Adventure Academy takes these types of learning games and presents them within the context of an MMO. You still practice your typing skills, read in-game books, expand your vocabulary, and solve basic math problems, but you experience all this within the context of an MMO developed by Age of Learning, the team behind ABCmouse. We spent some time with the game’s beta learning about Beowulf and Joan of Arc while exploring a charming 3D campus. 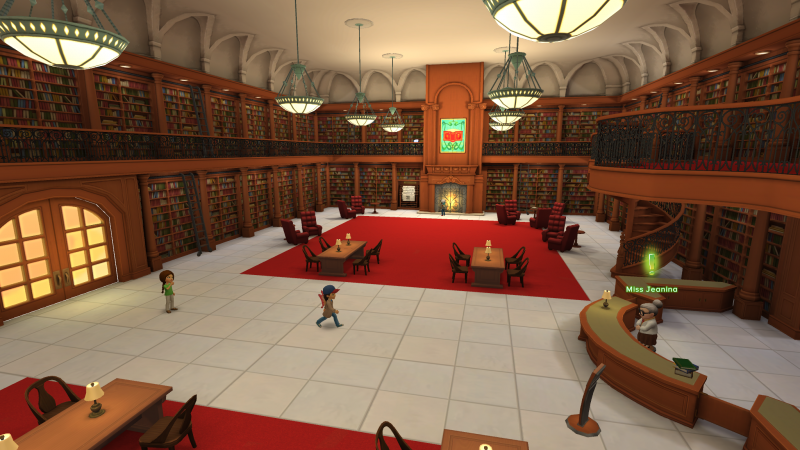 Each wing features an exhibit for players to interact with. In the library, students can read about the printing press and learn about Joan of Arc.

Character creators are part and parcel of many games today, but its inclusion in an educational game might feel novel to a third grader. After sculpting a Lara Croft-inspired character with brown pants and a long braid, the game dropped me into the titular academy. You’re encouraged to explore the campus, featuring wings for each major discipline: science, literature, history, and math. One thing kids will appreciate in Adventure Academy is that it allows them to focus on activities they enjoy. Don’t like math? You can read full-length books like Titanicat. Does history bore you? There’s a library of videos you can watch to learn science.

You participate in these activities by interacting with kiosks in each wing of the academy, and they take the form of simple flash games. I tried a number of games myself – they’re mechanically simple, and they don’t look as flashy as the game’s 3D world, but each one plays differently, which is another great way the game caters to different players. Some will like the drag-and-drop matching games while others enjoy Jeopardy-style vocabulary activities. 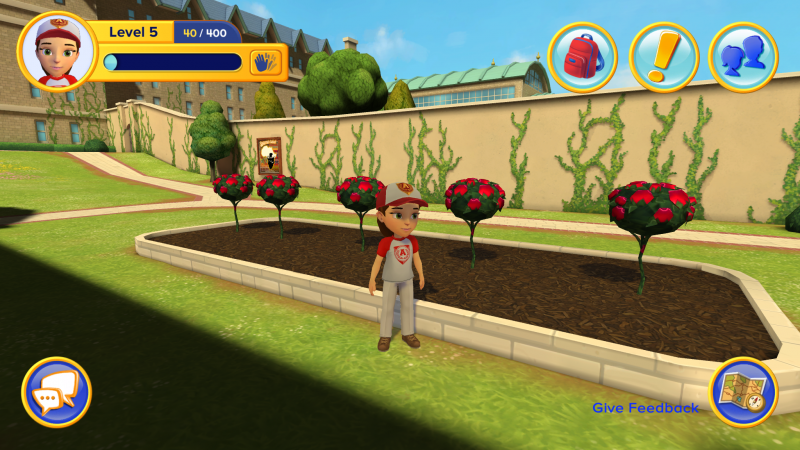 Most of the exploration-based quests we tried took the form of easy fetch quests, like this one that tasked us with planting trees in the garden.

A teacher oversees each area, and they issue you a variety of quests to explore on campus. Some take the form of fetch quests, like finding the missing finger bone of the T-Rex on display in the history wing or planting trees in a hidden mulch bed. One interesting quest asks players to locate pages of lore detailing the academy’s history, which are scattered around the building. While these quests were the type of mission I don’t like to see in MMOs, I think their inclusion might excite kids the most. Other players mill about completing quests, and there’s an in-game chat feature that third-grade-Hunter would have loved to use in a classroom. My best friend Jimmy’s assigned seat is across the classroom? Ha! I’ll just message him on Adventure Academy!

I expect the game to be some players’ first exposure to video game progression systems. You earn experience for completing each activity, and new quests open when you level up, as well as entirely new areas for kids to explore. New wardrobe options, like butterfly wings, backpacks, academy-branded sweaters, and infinity scarves, unlock at higher levels, which are incentives for kids to complete the game’s more educational activities at the kiosks. I was thrilled to see I could unlock a sword for my Lara Croft-themed avatar, and I know with certainty that, in elementary school, I would have obsessed over earning new cosmetic items long after class time. 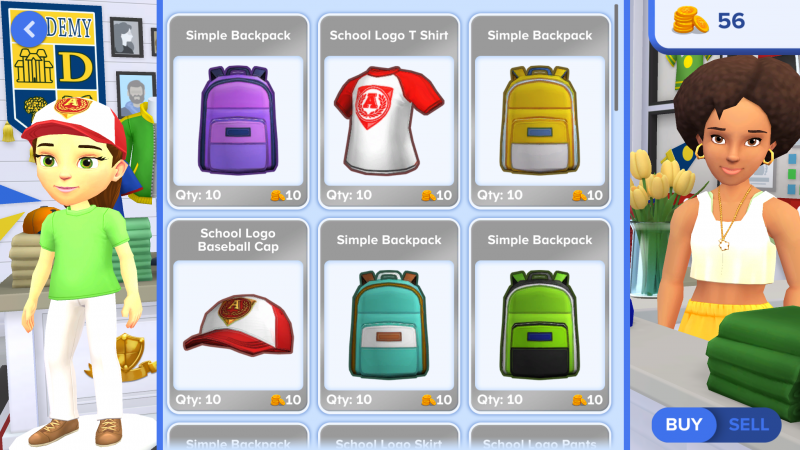 Cosmetic items get more unique at higher levels. We saw top hats, cowboy hats, and every type of backpack in the marketplace.

While the bevy of unlockable cosmetics will stir competition within classrooms, I’m surprised Adventure Academy doesn’t include leaderboards for its skill-based games. The ability to rise through the ranks of your peers is a feature that lends itself naturally to a game that’s otherwise pretty social. Another head-scratcher is the decision to make the game download while kids play; traveling to new wings or hub spaces for the first-time requires long load times. These moments weren’t unbearable, but I imagine they could be for a teacher with a class of twenty students who just want to play the game. I’m curious to see if players can download the game entirely at launch instead of having to confront these first-time loading screens.

Gripes aside, I think Adventure Academy has the potential to be a great educational tool for classrooms or a fun kid-friendly MMO that parents could introduce to their children. There’s course material for every type of student – from the bookworm to the kid who just wants to earn a bunch of experience watching science videos. Adventure Academy launches on May 1 for PC and on Android and iOS devices. You can purchase a monthly subscription for $9.99 or an annual subscription that comes out to less than $5 per month when you pay up front.

Many of our editors at Game Informer are parents themselves. Read Javy’s column on what it’s like to be a gaming parent in a gaming world, or Matt Miller’s column on great tabletop games to play with your kids.