It's been 50 years since Konami was founded, and to celebrate, the publisher is looking back at the games and franchises it built its reputation on in the '80s and '90s. The Konami Anniversary Collections gather releases from the company's past and brings them to modern platforms through the various digital storefronts.

The first Anniversary Collection is titled Arcade Classics. As the name implies, this brings players with eight titles from Konami's arcade past. According to the site, players will be able to experience these games with modern features.

The full game list for the Anniversary Collection Arcade Classics:

The second Anniversary Collection focuses on Castlevania. While the game list isn't complete, the final collection will deliver eight games. However, you probably shouldn't expect any of the more recent games to be included, as the description says that this collection is meant to be a complete look at the origins of the series. However, if you want more modern games like Lords of Shadow to make the leap, there may be hope yet; the description also calls this the "first Konami Castlevania Collection."

Here are the games revealed for the Castlevania Anniversary Collection so far:

The final collection brings fans back to the roots of one of the most beloved side-scrolling shoot-em ups with the Contra Anniversary Collection. As with the Castlevania collection, four of the eight games have been revealed so far.

Here are the games announced for the Contra Anniversary Collection so far:

Each collection also comes with an eBook to provide new information about the games in the respective collection, including interviews with the creators, sketches, behind-the-scenes info, and even design documents. 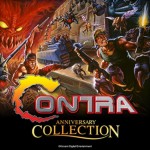