Last week, developer The Behemoth teased a re-release of its flagship title Castle Crashers for PS4 and Switch. Today, the studio confirmed it: Castle Crashers Remastered will come to both platforms sometime this year.

Castle Crashers launched on Xbox 360 in 2008 and has since accrued 20 million downloads across all platforms. A remastered version of the game launched on Xbox One in 2015, which is the version that will hit PS4 and Switch this year.

The game will run at 60 frames per second, as opposed to the original release's 30 frames per second, according to the developer's blog. It'll also include a multiplayer mini-game unique to the remastered version called Back Off Barbarian, as well as all previously released DLC, including characters, weapons, and animal orbs.

The Switch version takes advantage of the console's HD Rumble feature, as well as 4-player local Joy-Con support. The PS4 version, meanwhile, has a feature that lights up your controller's lightbar with your character's affinity color.

In its blog, The Behemoth also addresses whether or not we'll ever see a Castle Crashers sequel.

"I often see people claim we would never make a sequel," says designer Dan Paladin in the post. "That's not accurate. We might make one someday, but it would have to hit all the right points at the right times. It has to be a product that would end up vastly improved, rather than 'more of the same,' which is only something we can accomplish with gaining experience." 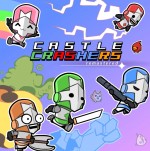