Power Rangers: Battle for the Grid is a 3v3 tag fighting game, and the title's latest gameplay trailer shows how to use your allies to brutal effect.

Players can gang-up with their teammates to coordinate attacks, and today's trailer also gives a glimpse at a Megazord ultra, which can deliver a drill to the face of Tommy's opponents.

For more on the game, take a look at this recent trailer featuring Lord Drakkon.

Power Rangers: Battle for the Grid comes out in April as a digital download-only title ($14.99) for PS4, Xbox One, and Switch. It releases for PC later in 2019. 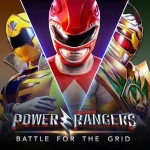