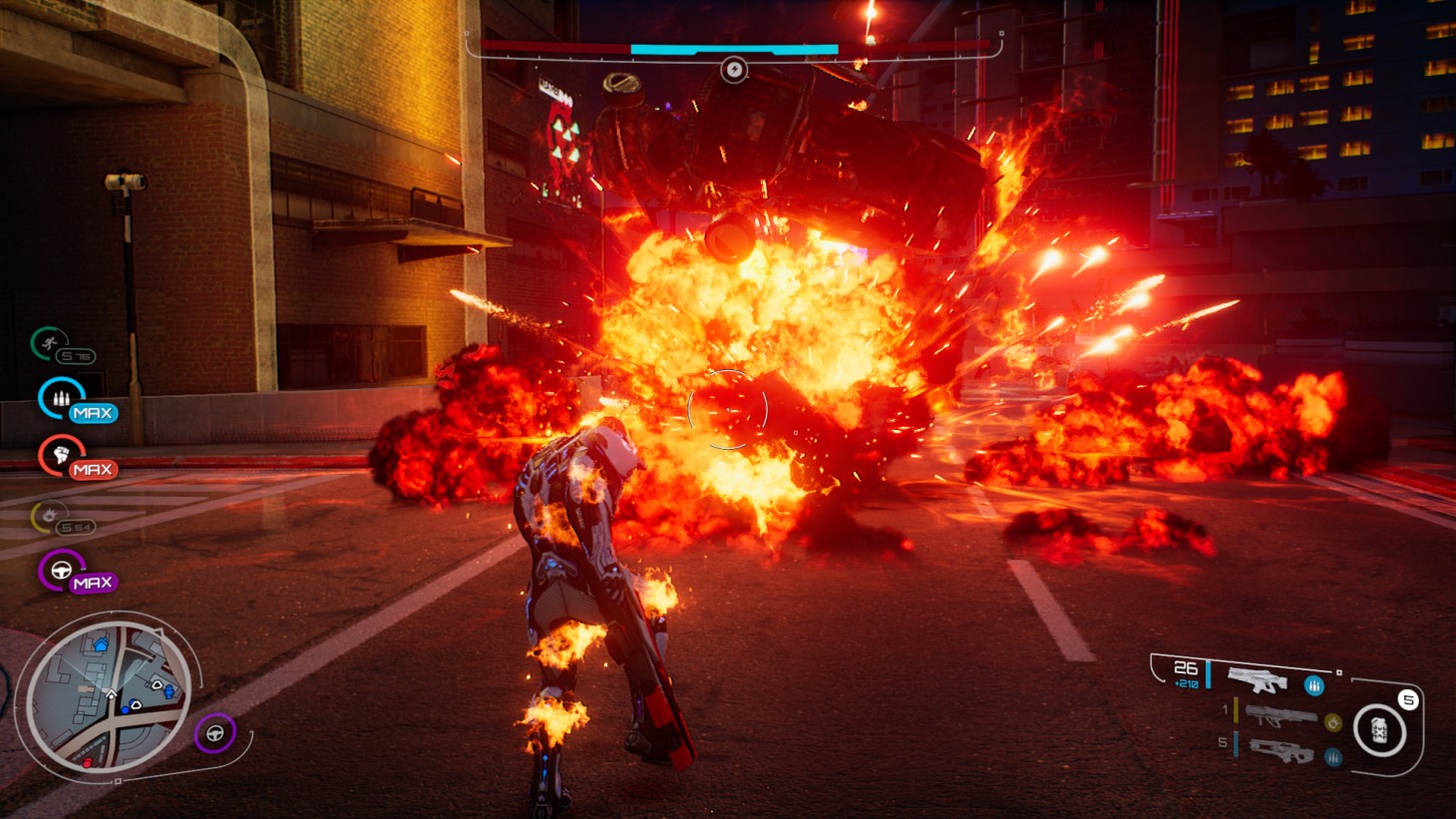 Since its release, Crackdown 3 has maybe… failed to set the world on fire. Despite all of its flaws (and the fact that it feels like a game plucked out of 2007) several of us around the office have still been drawn to its chaotic action and its impossibly violent idea of criminal justice. Kyle Hilliard, Leo Vader, and Nathan Anstadt discuss what keeps them coming back for more. 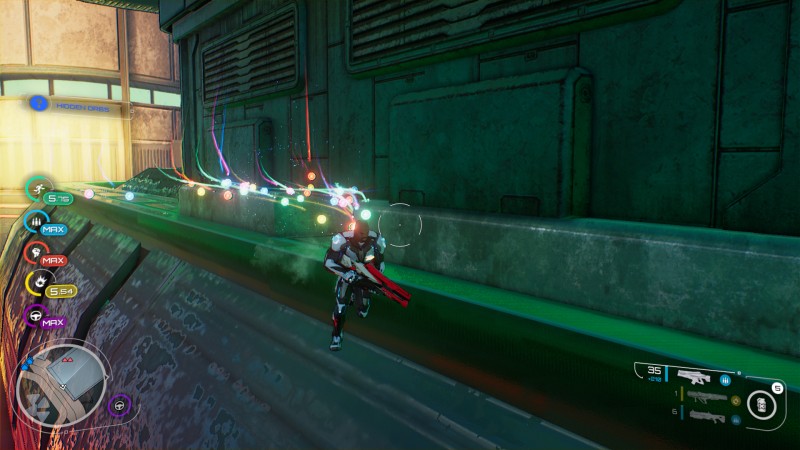 Nathan Anstadt: I’d like to start out by saying that everything Jeff Cork said in his review is completely accurate. The graphics look a bit dated, the action isn’t the most inspired, and the story is slight, but in spite of these gripes, I’ve had an absolute blast with the game so far. It’s as fun as ever to jump twenty feet in the air and hunt down agility orbs. What have your impressions to the game been so far? You’re enjoying it?

Leo Vader: I just beat it this past weekend, I had a really great time with it! I don’t feel like I even have to make excuses for it. The bad parts are bad, but the combat and traversal are both really fun. Locking instant headshots, telekinetically grabbing a car and throwing it at a mech, and then slamming into enemies on the ground all in one jump feels great. The power growth also feels so quick and rewarding in an age where so many titles try to draw out progression as much as possible for maximum hours (or money) put into their game.

Kyle Hilliard: I would firstly like to take this opportunity to publicly apologize for enjoying Crackdown 3 as much as I have been. We posted our Sick Stunts video on the game a few days ago, and the commenters have been calling us out for enjoying the game even though we’re not supposed to because it looks kind of old. And for that, I am sorry. I will do my best to not smile when driving a car up the side of a building, and then jumping off of it when I reach the top – but I can’t make any promises.

All that being said, I understand the backlash to the game to a certain degree. This is an experience being sold for $60 (if you’re not a Game Pass subscriber), and it does often feel like a dated experience. It does not live up to modern gaming open world standards and it is underwhelming as a console-exclusive, especially when you compare it to Sony’s library, but it doesn’t change the fact that it nails some key elements that are just fun, like mobility and explosions. 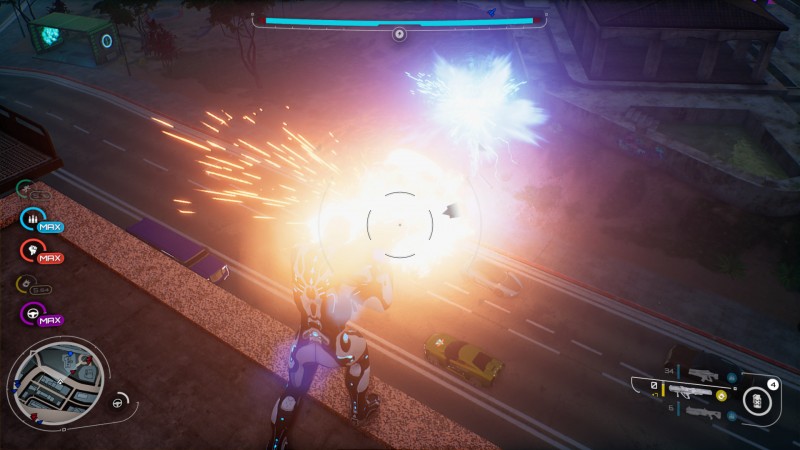 Leo Vader: Let’s not gloss over the price though. Game Pass was $2 for a month the week of release, which is more than enough time to 100% the game. In a world without it, I’d definitely be more upset about what Crackdown is, and its, frankly, busted multiplayer. Co-op is locked at 30 FPS on PC, which feels super jarring because of how smooth it runs in single player. Wrecking Crew was a cute try at something. I think. Maybe.

Nathan Anstadt: Kyle, you don’t need to apologize for liking Crackdown. It’s the first game in a while that I devoured in a weekend; I couldn’t put it down. I’m just caught between two beliefs about the game: On one hand, I understand the complaints, but on the other hand, I only need like 400 more agility orbs, so…

And it really is the perfect game for Game Pass. I’ve now played this game, like Leo said, all the way through for $2. It’s the only open world game I’ve played where I legitimately enjoyed the street races. Every activity was just a good excuse to see what Terry Crews sees in his day-to-day.

Leo Vader: The agility races are super fun too, thanks to the extra jumps, dashes and launch pad gadget. Moving around is a constant joy. It’s easy to write this off as a re-release of the original Crackdown, but core changes like these genuinely improve the experience I was blown away by back in 2007. 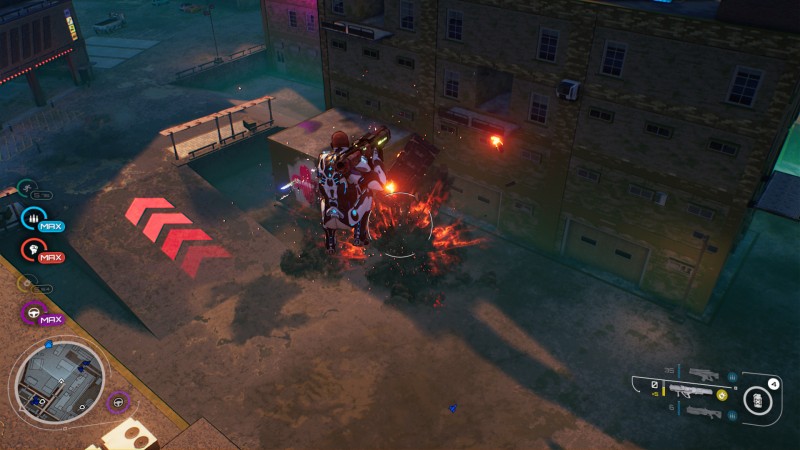 Nathan Anstadt: I was a little disappointed that the destruction they initially pitched for the game was only relegated to the multiplayer, but I honestly don’t know what a more modern Crackdown should even look like in 2019. I don’t really need a more robust story, I just want a good excuse to fly around an island and drive a spider car through floating rings.

Kyle Hilliard: Ultimately, it’s not really our responsibility to consider what a 2019 Crackdown should look like. That’s up to Microsoft and Sumo. I am confident that this isn’t it, but I am with you in the sense that what is here is enjoyable. The car’s second form, for example, really changes the car-based navigation in a fun way.

Leo Vader: Can we talk about that spider car? There was an SUV that could similarly climb up walls for a few seconds at a time in the original, and it took a lot of skill to scale buildings with it. In Crackdown 3 they let the spider car stick to surfaces permanently, and it is so much fun to speed to the top of buildings and jump into crazy stunt rings for driving orbs. Additionally I think the leap from three Agency vehicles in Crackdown to one transforming summonable whip was a really smart change.

Nathan Anstadt: Some of the most fun I had in the game was figuring out how I was going to get that car somewhere with a stunt ring. I could drive up the wall of a building or just pick the car up over my head and jump up there. There is an achievement for driving your car to the top of the game’s tallest building, and if anything should sell someone on Crackdown 3, that’s it. It was amazing.

Kyle Hilliard: In Crackdown 1 I eventually gave up on trying to hit most of those rings just because it wasn’t fun to find the ramps leading to them, but the combination of the spider car and being able to carry cars more easily is making me stop whatever I’m doing in order to jump through those, and they’re rewarding. 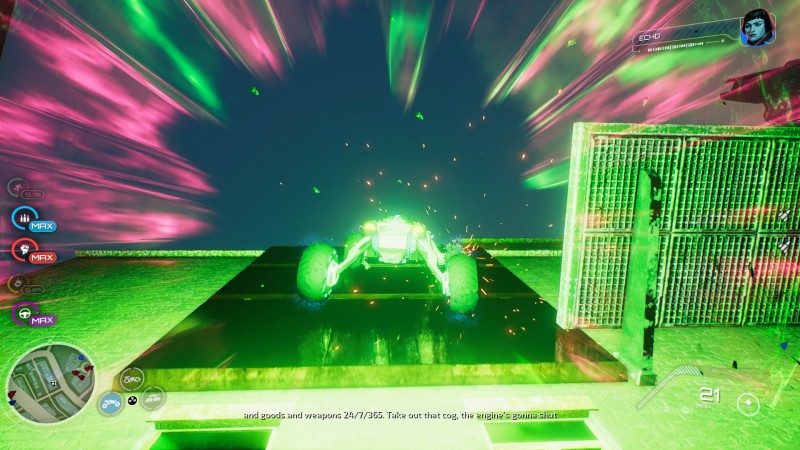 Leo Vader: In so many ways it’s a confusing skeleton of a game that I can’t believe took so many years to develop, but the bones are fun throughout the whole experience. Gaining health back with orbs makes zipping around in combat and balancing smaller foes with bigger ones really engaging, and I got more out of the game the more I focused on what I was doing in combat. Plus the open-ended nature of the design (letting you take on any boss from the start if you want) which carries over from the first game, really shows you how ahead of it’s time that game was. Crackdown 3 isn’t some groundbreaking experience, but what it is plays great and I think deserves more credit than it’s getting.

Nathan Anstadt: Absolutely. Especially if you have Game Pass. I never felt bored tracking down side activities to complete, and at least for the price of a month of Game Pass, it’s completely worth checking out.

If you’re still on the fence about Crackdown 3, you can watch the New Gameplay Today or you can watch us perform some sick stunts!