The Legend Of Heroes: Trails Of Cold Steel III Coming To The PS4 This Fall

NIS' involvement is not without reservation. The publisher handled the localization of Ys VIII after XSEED, and NIS did not do a great job.

If you're not familiar with this side series, be sure to read Kim's Grind Time column on why you shouldn't overlook it. 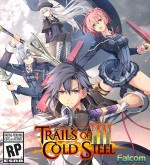