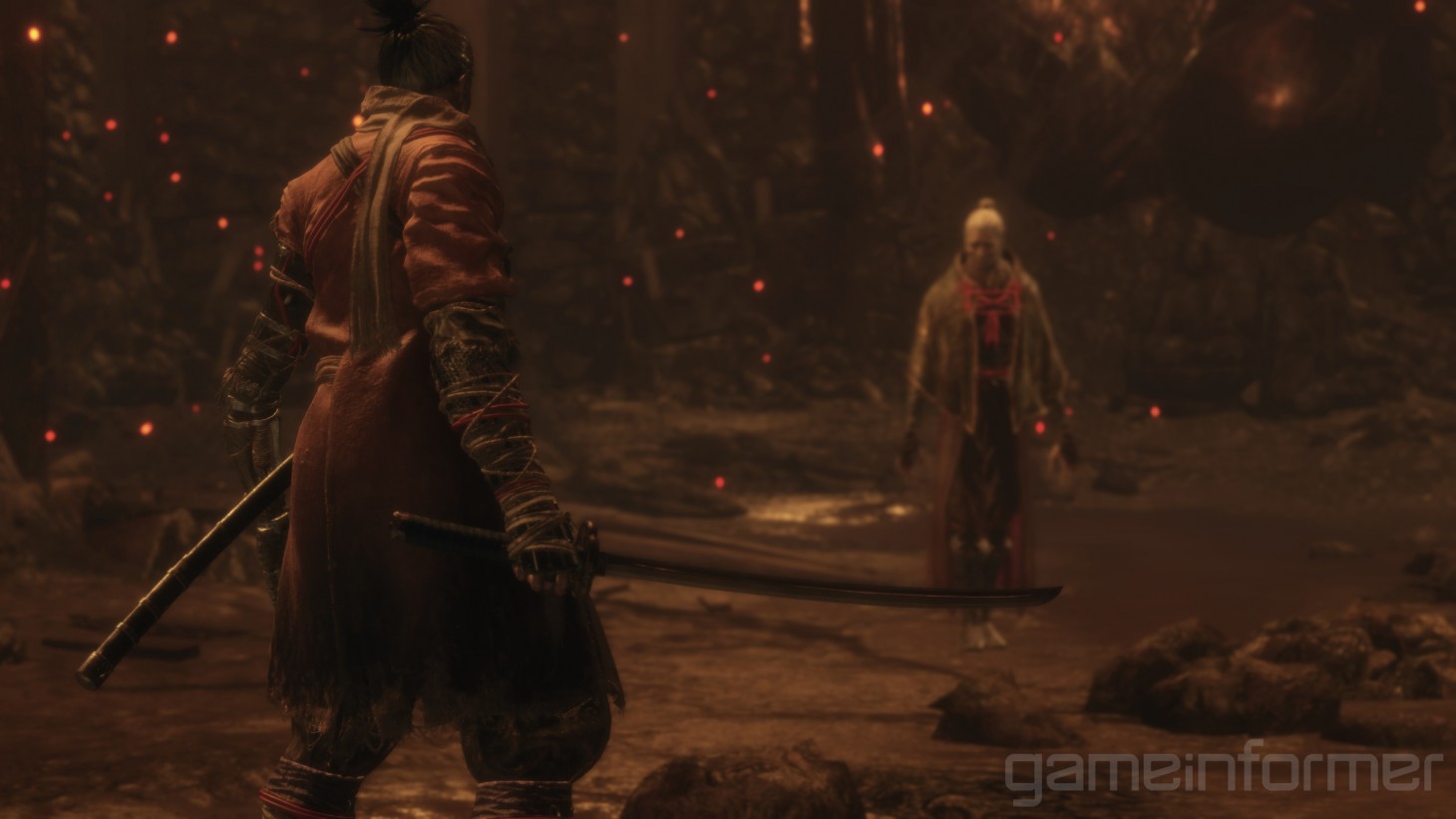 In From Software games, bosses are the main event. From Ornstein and Smough in Dark Souls to The Nameless King in Dark Souls III, the developer has crafted incredibly rewarding  enemy encounters over the last few years. With Sekiro: Shadows Die Twice, From is changing their approach to combat, which means how they design bosses has to follow suit. Although the boss we faced in our time with the game definitely captured the feel of a From Software boss fight, we did notice – and were able to talk to From about – how Sekiro’s new combat and traversal options could alter the way we approach their bosses.

Although the Dark Souls series let players tweak their characters towards archetypes like warriors, archers, or mages, this meant having to keep these archetypes in mind when designing bosses. “We have to restrict ourselves, and how far we can take that balance and that tuning, in order to cater to all these playstyles,” says From Software marketing and community manager Yasuhiro Kitao. “Sekrio, with a fixed protagonist, allows us to hone in on that single-player experience, and tweak the boss battles and the encounters to accomodate for all of these tools at the shinobi’s disposal. So we want players to eventually use every aspect of their arsenal and really use their cunning, and use every aspect of their skillset, to take on these really challenging foes.”

From wants to tweak every combat and boss encounter around The Wolf’s specific set of tools, exploring how they can create new challenges with them. With the exception of swimming, this includes some of the new traversal and combat options, such as the grappling hook, as well as stealth. "The traversal options allow much more dynamic movement within the boss arena, both for yourself and the boss character themselves,” says director Hidetaka Miyazaki. “Previously, you would have just had to run around a huge boss’ feet and hack away at his ankles, but now you have all these movement options; you can both fully use the extent of that arena.”

Not every boss will let you use every kind of approach, however. “There are boss fights that through design didn’t fit that staple,” Miyazaki says. “If we made every boss [one where] you were able to use the grappling hook to zip everywhere or stealth kill every boss, it would just get monotonous and boring.” In order to keep players on their toes, Miyazaki wants to make sure players think about how to approach every boss differently. “So there may be boss fights where you’re up against a huge creature and you need to use the full arena and get around very quickly and use that dynamism, but there may also be fights where you just need to go toe-to-toe and use every piece of kit in your arsenal,” he says.

The boss we faced off against in our demo, Lady Butterfly, showcased some of these differences in action. Far from the hulking beasts we’ve come to expect in From games, Lady Butterfly is a smaller, nimbler opponent in the vein of Father Gascoigne from Bloodborne or The Abyss Watchers in Dark Souls III. Wielding a pair of extra-long kunai in each hand, she’s incredibly agile and aggressive; she weaves in and out of our effective ranges on a dime and covers her retreat by chucking kunai, then hopping among razor-thin wires to keep herself airborne, making her difficult to nail down. She also has an uncounterable throw move (marked by a glowing icon), which we have to dodge.

The new posture system also changes up how we think about the fight. Lady Butterfly isn’t invulnerable to attacks and will still take damage from our blows, but it’s minimal enough that we know we’re not going to win this fight by attrition. In order to break her posture and line up a death blow, we need to keep up our pressure, which makes retreating riskier than it has been in the past, since it’ll slow down our progress if we take too long.

Although it’s hard to keep up with her on-foot, we have a couple of tools at our disposal that make the fight a little easier. For one, we’ve upgraded our shuriken prosthetic so we can follow it up with a dash attack, which lets us maintain our pressure even after she’s retreated. Additionally, we have the Shinobi Firecracker prosthetic, which disorients her long enough for us to get a few extra attacks in.

Eventually, after reading her attacks and attacking her enough, we’re able to break her posture and land the death blow. But after losing her first life (Enemies can have “life pips” just like Sekiro that must be expended before truly dying), she’s got another surprise for us. When she gets back up, she’s joined by a number of illusions, all of which are all eager to cut us down with their hoes and knives.

Miyazaki tells us most bosses have similar mid-fight surprises in store. “It has varying degrees depending on the boss but yeah, you won’t just see the same fight from start to finish,” he says. “They will change up even the battle tempo or some sort of newer element to the battle in various degrees.”

Luckily, we have a way to dispatch the ghosts. As you explore Sekiro’s take on Sengoku Japan, you can find hints about how to defeat certain bosses. Before we headed into Lady Butterfly’s chamber, we ran into a dying soldier, who told us that we’d be doomed without Snap Seeds. We happen to have a few, and realize their use: to dispel illusions. Popping a few of them emits small wave of energy that wipes out the closest of the illusions. This clears a path for us to approach her again, letting us zero in on her. Any illusions we don’t deal with, Lady Butterfly is able to turn into numerous highly-lethal butterfly projectiles, which can hard to dodge and slow down our approach.

As we start chipping away at her posture, she summons a few more, and we quickly retreat to dispel them once again. With after a few healing gourds, quick movements, and well-timed strikes, we’re able to finally take her down. While this encounter isn’t exactly unheralded in the world of From games, it does speak to how Sekiro hopes to change up some of the established rhythms of how the developer approaches both combat and bosses.

And, according to Miyazaki, she’s just one of many surprises From has in store. When asked about his favorite boss in the game, Miyazaki points to the Ape-like boss we saw towards the end of the trailer shown off at last year’s Tokyo Game Show. He also hints at another boss, though he wouldn’t offer too many specific details. “You don’t often see [this] in boss fights. They use really dirty tricks. They’re real devious, real underhanded techniques,” he says. “Hopefully, you’ll know that one when you see it.” There will also be optional bosses to find and defeat as well, and Miyazaki once assures us they’ll be as tough as we hope.

In previous From games, taking down a boss meant having your humanity restored, or getting a boss soul you could use to create a powerful weapon. Since neither of those bonuses are an option in Sekiro, From has other rewards in mind. We can’t say what we got from defeating Lady Butterfly, but players are going to want (and need) what these bosses end up dropping, according to Kitao. “We do want people to feel like, ‘Yes, I’ve beaten this boss, I’ve gotten something from it, I’m able to improve.’” he says. “It depends on the boss, but for instance with one of the very early bosses in the game, you acquire the item that allows you to begin restructuring your prosthetic tools, so this opens up this whole new line of customization.”