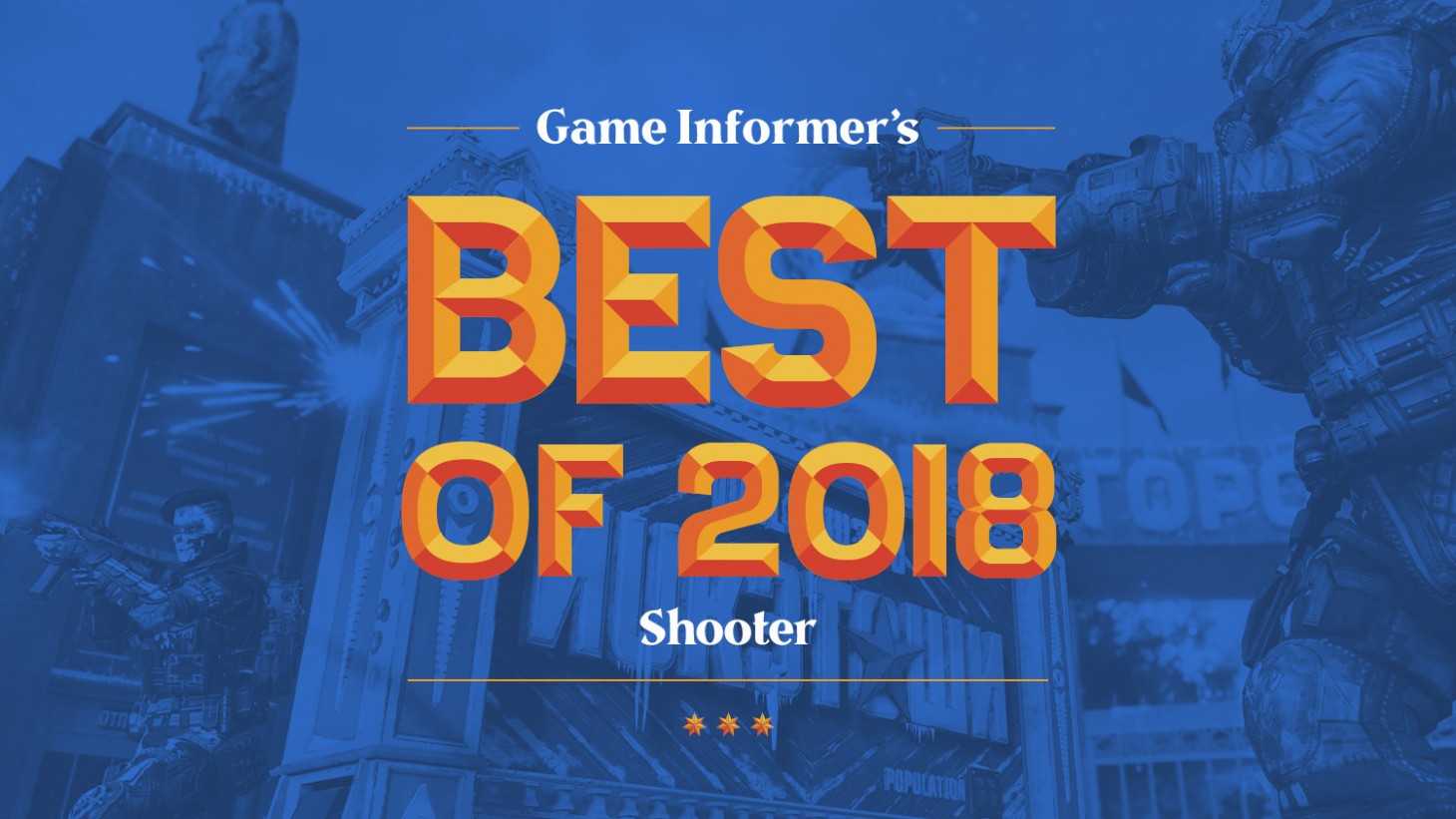 Third- and first-person shooter fans can always rely on a steady stream of reinforcements coming to their preferred genre, and 2018 was no different. Many of the familiar franchises we expect to see on an annual or bi-annual basis returned, but the most welcome trend of the year was the diversity of experiences these games offered. With tactical skirmishes, cooperative sci-fi stand-offs, modern-day open worlds, historical settings, nostalgia-driven shotgun fests, and an explosion of battle royale games among the ranks, you could argue that 2018 was one of the most eclectic years in recent history.

From this embarrassment of riches, we had the tough task of isolating the peak performers for our 2018 Shooter Awards. Here are the winners: 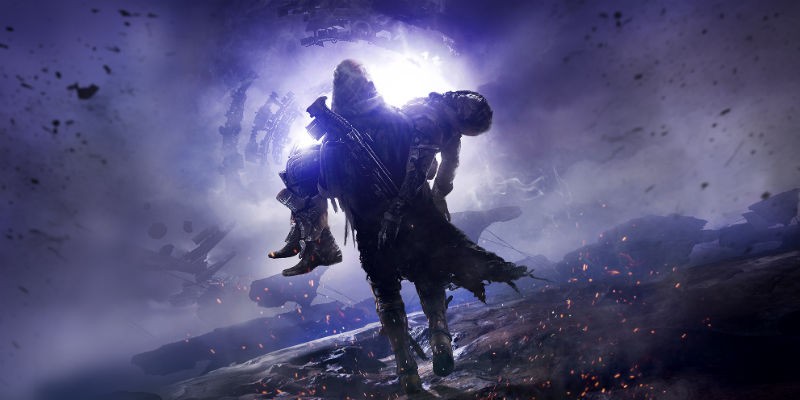 Cayde-6’s series of unfortunate events may have grabbed all the headlines, but the Forsaken campaign is successful for more than just story reasons. The open-ended structure allows guardians to hunt down the Barons any way they see fit, the missions have more craftsmanship on display than previous entries, and the story delivers memorable set pieces. Best of all, the campaign bleeds perfectly into Forsaken’s enhanced endgame. 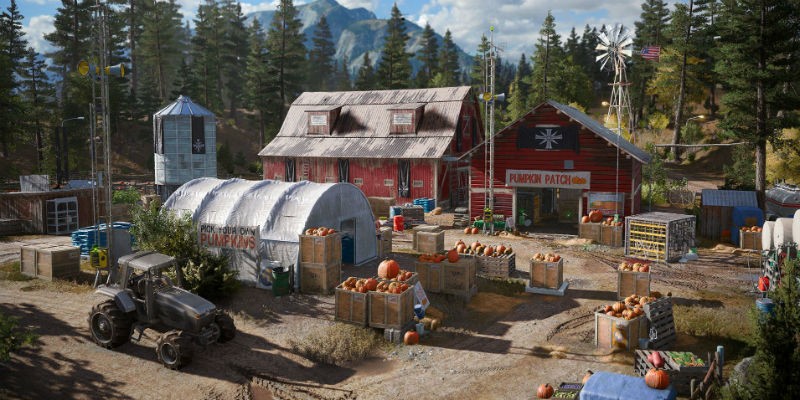 Far Cry typically takes us on globe-hopping journeys to exotic locales, but the fifth entry doesn’t suffer for staying home. Rural Montana is packed with curious people to meet, but the real star is the picturesque landscape begging to be explored. Pulling out your binoculars to survey the peaks and valleys around you, Hope County beckons you to soak in your surroundings. Enjoy these moments of peace and reflection while you can, because no matter how far off the beaten path you may be, we guarantee a white peggie pickup truck is right around the corner ready to bring the fight to you. 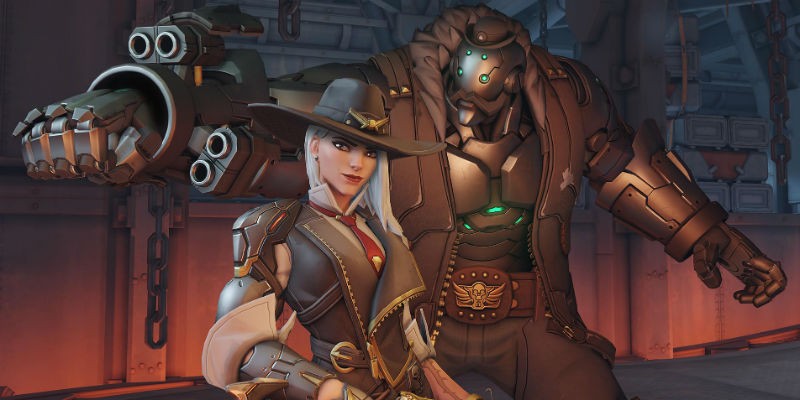 This jack-of-all-trades gun-for-hire comes to the fight with instant pedigree. As the head of the Deadlock Gang, Ashe was once McCree’s boss. Her rifle is effective in both mid- and long-range firefights, but her sidekick B.O.B. is the real attention grabber. When Ashe activates her ultimate, this A.I.-controlled butler/bodyguard effortlessly locks down control points, smoking anyone who dares walk into the area. Rival players know to proceed with caution when she yells, ”B.O.B., do something!” 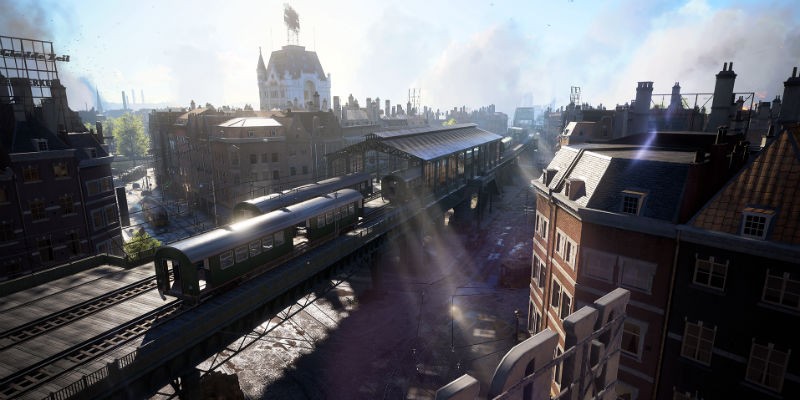 You can always count on the technical wizards at DICE’s Stockholm headquarters when it comes to gorgeous visuals, and Battlefield V is no exception. DICE may have gone back to the past with the World War II setting, but its eyes were locked on the future when it comes to graphics. As the first game to release supporting DXR ray tracing, the implementation comes with some obvious framerate costs, but the visual fidelity of real-time light reflections on water, mirrors, and windows looks quite impressive. This feature isn’t worth the performance cost in competitive multiplayer, but turn it on in War Stories and enjoy the cutting-edge graphics. 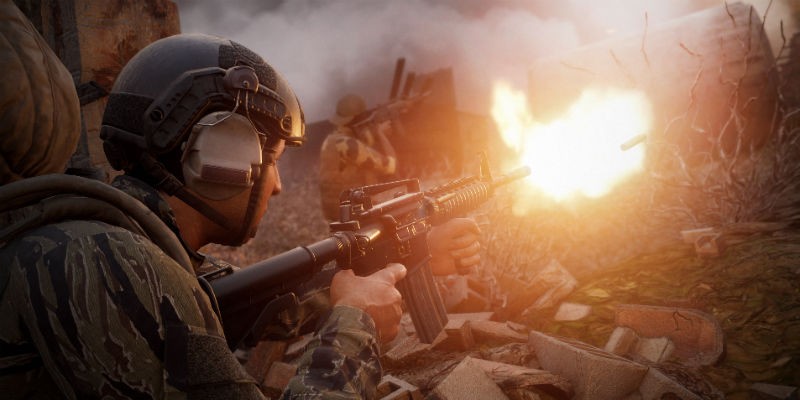 Battlefield has dominated this category for years, but this year we have a newcomer on the frontlines. Insurgency: Sandstorm takes a page from the old-school Battlefield playbook to create a riveting war experience. Hearing the footsteps of approaching enemies as you hunker down at a control point waiting to open fire builds an extraordinary amount of tension, and the satisfying THWACK of gunfire really drives home the point that one shot from these deadly modern-day weapons will end your life. 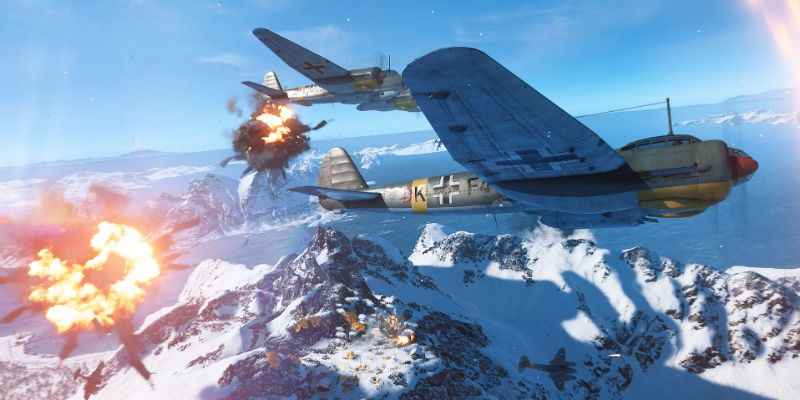 Composers Johan Söderqvist and Patrik Andrén delivered a memorable score for Battlefield 1, but this new composition is their best work yet. Equal parts somber and uplifting, the score works well whether you are playing the more serious-minded War Stories or jumping into the multiplayer mayhem. If you want to hear a sample, check out the remarkable “Flute Theme.” 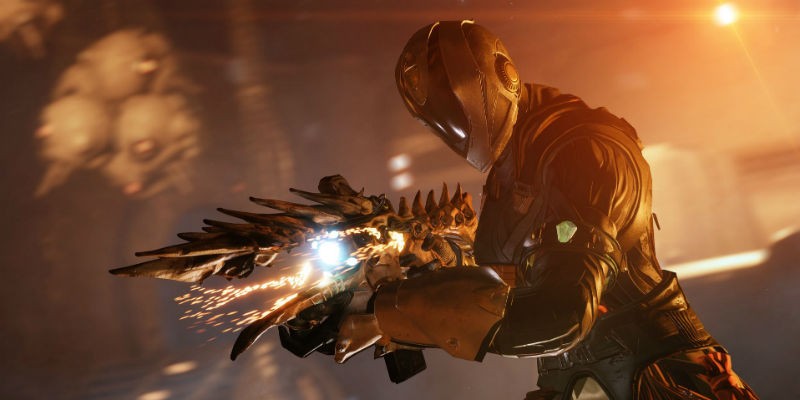 Destiny’s sci-fi setting affords Bungie’s designers the opportunity to create some amazing weaponry. With death bringers like the Wish-Ender and One Thousand Voices, the Forsaken expansion continues in this tradition. The best exotics in the game may be a pain to earn, but their prowess makes the journey worth it. 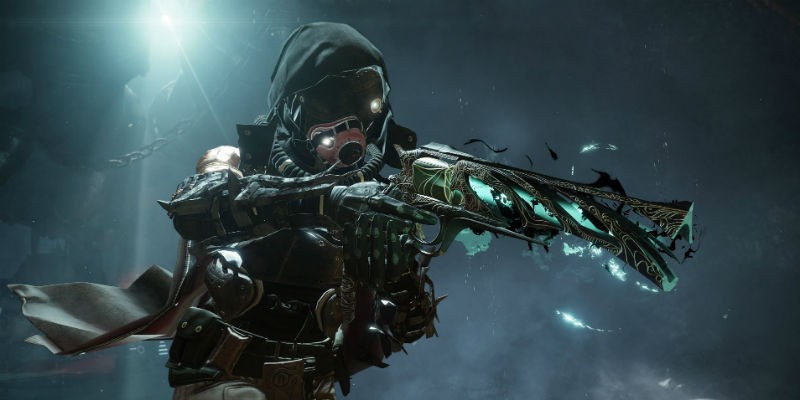 At this point, we should just rename this category The Destiny Award, because it’s been years since a rival studio has seriously competed with the satisfying feel of Bungie’s varied and powerful arsenal. Whether you are pulling off devastating sniper shots from afar or melting foes with a penetrating fusion rifle, nearly every gun begs you to pull the trigger to see what happens. 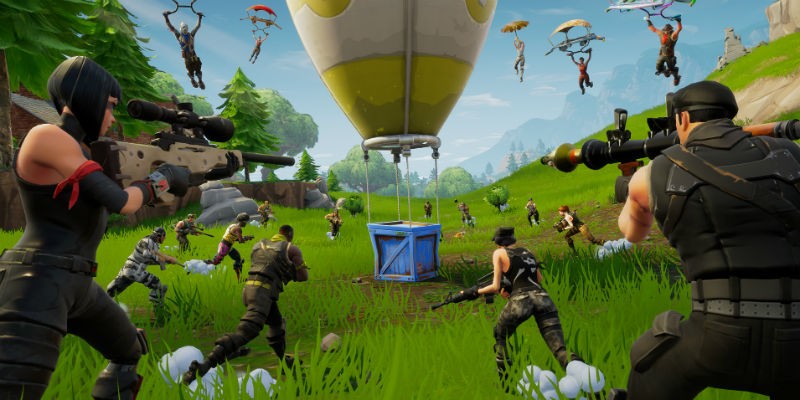 When Fortnite’s battle royale started taking off, Epic Games saw an opportunity to do something special and grow the community to unprecedented levels. To help fuel its ambitions, the company made the tough call to cancel projects like Unreal Tournament and Paragon so the entire studio could focus on delivering a steady stream of new content for its blockbuster hit. We saw the fruits of that decision play out in 2018, as no other game could keep pace with the frequency and quality of the Fortnite content drops. 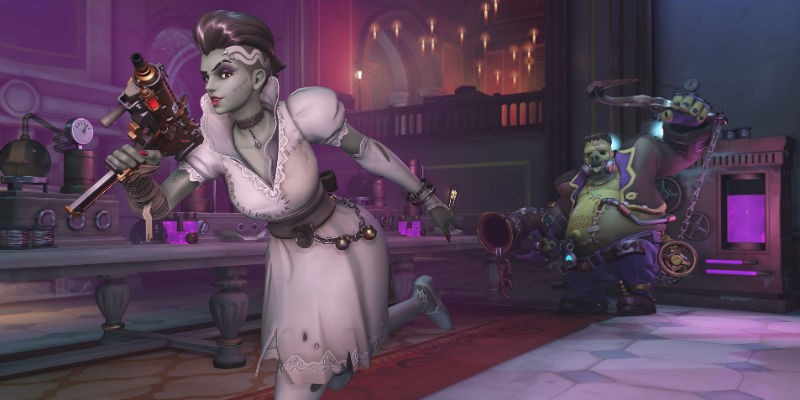 Many shooters have interesting hero cosmetics that lighten the mood and let players showcase their personalities, but no one does it better than the Blizzard artists working on Overwatch. The studio delivered new and interesting looks for its incredibly deep roster all year round. The Halloween skins, in particular, won over the Game Informer offices in 2018. 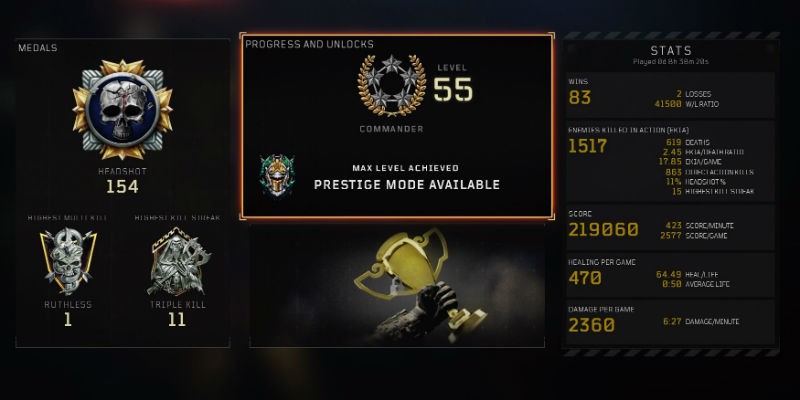 Whether you are playing zombies mode, competing online in traditional multiplayer, or fighting to be the last person standing in Blackout, developer Treyarch keeps you engaged with well-designed progression systems. The Black Market system found in Blackout and PvP was particularly interesting, giving players quests to earn access to the attractive cosmetics, gestures, and emblem stickers available in each season's supply steam. 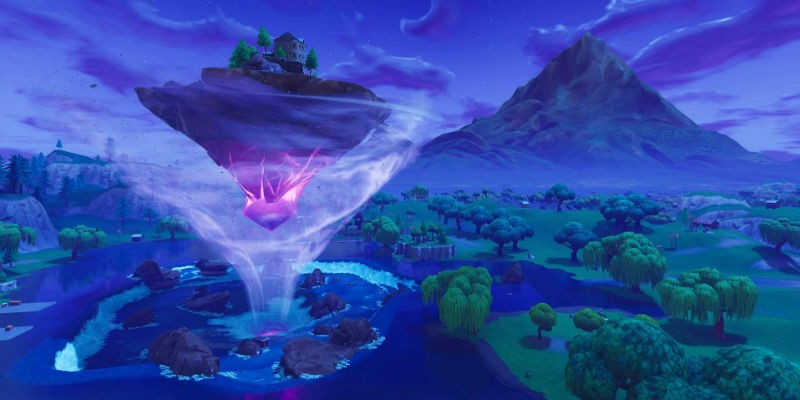 Rather than create a series of new battlefields over the course of the year like most multiplayer games, Epic went another route with Fortnite, adding interesting new locales into the pre-existing map. This organic approach to content development kept the experience feeling new throughout the year, and delivered several memorable moments where a location like the meteor crash or Loot Lake became the centerpiece of conversation. 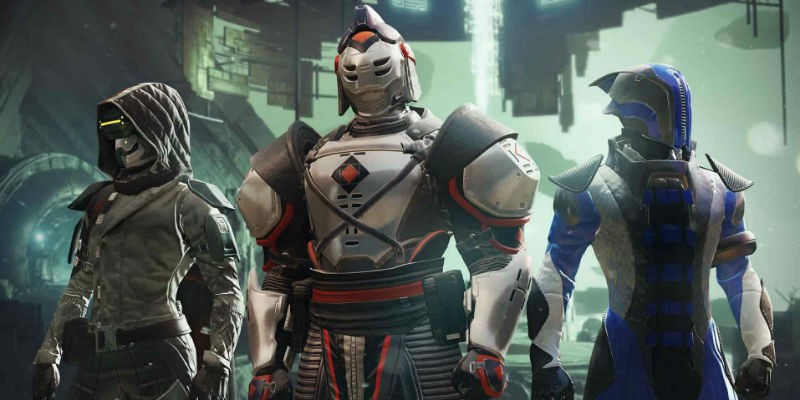 Destiny always leans heavily into cooperative gameplay with its missions and raids, but Forsaken amplifies this approach with the new “PvEvP” Gambit mode. This hybrid space finds the sweet spot between the classic PvE and the more punishing competitiveness found in Crucible. Surviving invasions from rival guardians in this mode requires your squad work closely together. In addition, Bungie developed two raids – Last Wish and Scourge of the Past – to test high-end teams. 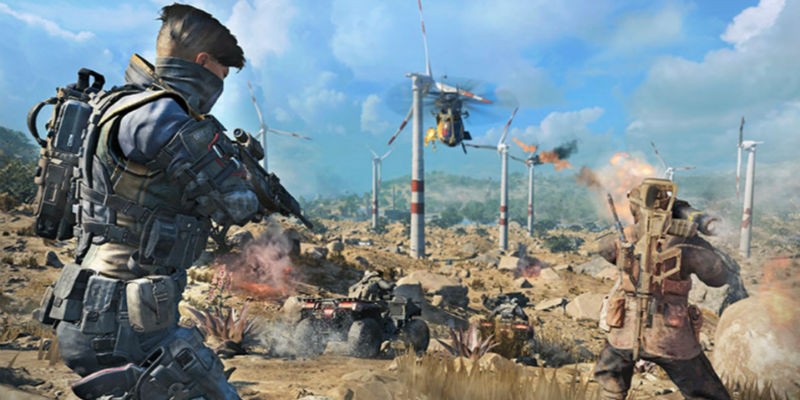 This may be a controversial pick for those who spend dozens of hours a week with PlayerUnkown’s Battlegrounds or Fortnite, but no battle royale mode delighted the Game Informer staff more in 2018 than Call of Duty’s Blackout. The excellent pacing cuts down the foraging and amps up the action, and the gambit of whether or not to venture into the zombie zone for the better gear creates an interesting risk-reward scenario. The fun gadgets and deadly vehicles further add intrigue to tense play, making it hard to stop saying, “just one more round.” 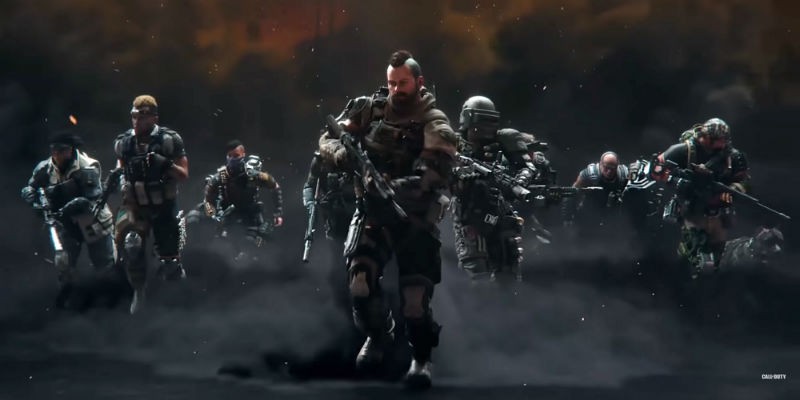 You could spend hundreds of hours in Blackout mode alone – the praises of which we just sang. On top of that phenomenal experience, Black Ops 4 also has a compelling playlist of core modes like Domination, Control, and Kill Confirmed if you need a palette cleanser. These modes clearly take a back seat to battle royale, but they are still a great place for experimenting with weapons, trying operator mods, and enjoying classic run-and-gun play. Combined with the battle royale centerpiece, Black Ops 4 offers the most compelling competitive multiplayer suite on the market today. 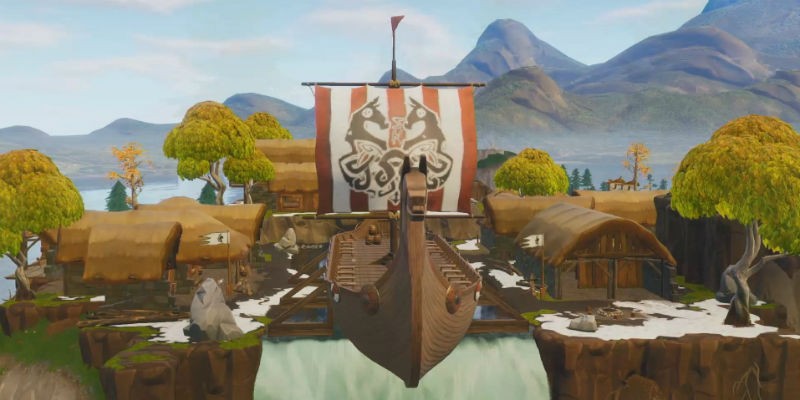 Of all the innovations we expect to see mimicked by future shooters, the Fortnite map evolution stands on the top of the list. This map is always changing, never stagnant; Epic Games did a phenomenal job of keeping its battle royale fresh with map alterations throughout the year. Some were purely cosmetic, like Moisty Mire adding a film set, but others like the Desert added to the Fortnite lore and created new gameplay centerpieces for season content. We’d love to see developers of other shooters think actively how they can improve (or merely freshen up) their own maps on a regular basis. 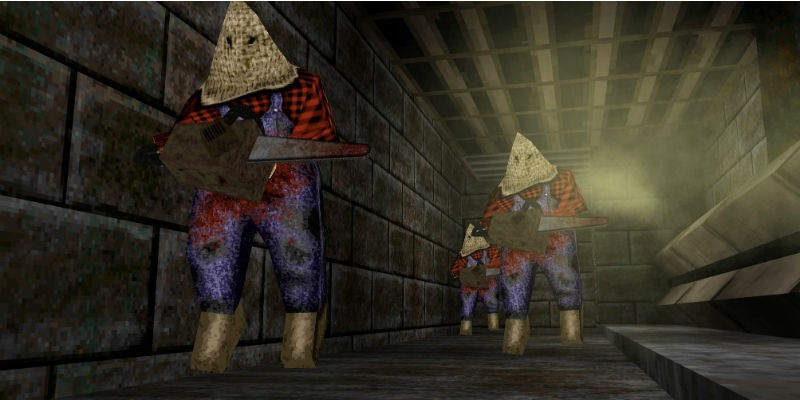 Sometimes you want to take a bloody stroll down memory lane and eviscerate enemies with shotgun blasts in a 486-era blocky corridor. New Blood Interactive’s Dusk scratches that primordial itch for those of us who grew up playing Doom, Duke Nukem, and Quake. Forget narratives, leveling, and set-piece moments – this game is all about the glorious shooting. 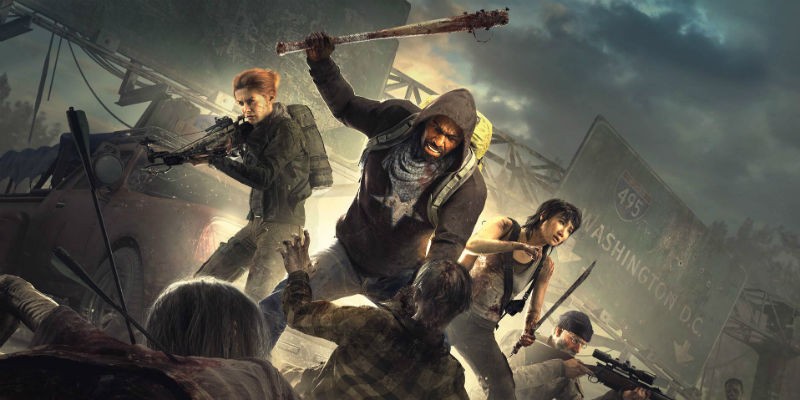 Landing a license the pedigree of The Walking Dead, we expected Starbreeze and Overkill to build on the success of Payday 1 and 2 and deliver a compelling and addictive cooperative shooter. What we did not expect, however, was a regressive disasterpiece that can’t even stand up to the level of its predecessors. This game is a flaming dumpster fire on all levels, which unfortunately makes us very skeptical about the prospects of Payday 3. 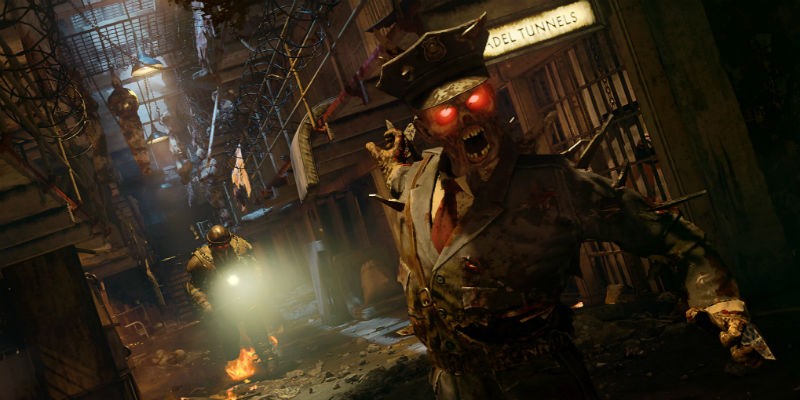 Shooter of the Year: Call of Duty: Black Ops 4

Yes, it sucks that Treyarch walked away from single-player campaigns. We hope they return in future Call of Duty games, because no one does set pieces like the collection of Activision studios working on this franchise. But when you tally up the increased depth of zombies mode, the addictiveness of Blackout mode, and steadiness of the competitive multiplayer experience, we still think you get more than your money’s worth with Call of Duty: Black Ops 4. In a year packed with interesting shooters, this one stole our hearts and became our favorite of the bunch.