One of the ways Sekiro: Shadows Die Twice marks a departure for From Software is in how your character becomes stronger. In other From games, you tailor your character by pouring points into different stats like strength, dexterity, and intelligence, depending on whether you want to fight as a brute, archer, or wizard, respectively. Shadows Die Twice won’t have that breadth of customization, as your character, The Wolf, is a shinobi through and through. That doesn’t mean you can’t tailor him to fit your playstyle, though.

A major departure hardcore From fans may scoff at is the lack of corpse runs. Though you gain experience from defeating foes in Shadows Die Twice, that experience is now divorced from currency; gold now drops from enemies as well, and you won’t lose either when you die. If you’re afraid that change might upset the balance of tension and accomplishment that have come define From games, there’s hope: Director Hidetaka Miyazaki says death will have a detrimental effect, but wasn’t willing to tell us what that might be.

Instead, progression in Shadows Die Twice is slow but steady, as the experience points you gain from killing enemies fill a bar that eventually provides you with a skill point that, you guessed it, you can spend in a skill tree. But it wouldn’t be a From game if there wasn’t a catch: Before you can invest in a skill tree, you have to unlock it by finding a particular item as you explore the world.

Once you’ve unlocked a skill tree, you can invest skill points at Sculptor’s Idols (Shadows Die Twice’s take on bonfires). From showed us a few skill trees for The Wolf; one based on shinobi arts, one around samurai arts, and another based on building up the prosthetic arm. Along with passive buffs and improvements to your basic moveset, you can also unlock special moves called combat arts, activated by pressing both front shoulder buttons and which must be equipped separately. These moves are meant to be periodic rewards that let you invest in a particular playstyle “just to give you something to make you feel like you’re roleplaying in a certain way,” says Yasuhiro Kitao, manager of marketing and communications at From Software. 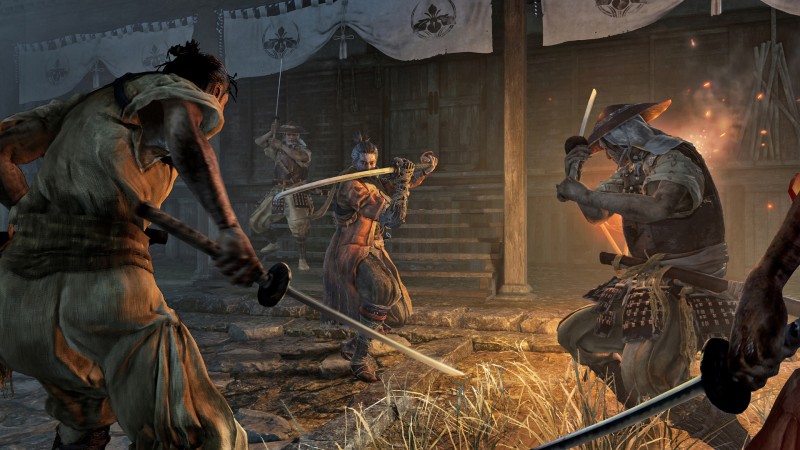 Each of these trees is catered to a different playstyle. The samurai skill tree, for example, resembles the common warrior archetype, which relies on overt, grounded aggression. The shinobi tree is more evasive and lets you control crowds, with skills like a spinning slice attack that deals damage in an area and the ability to step over enemy spears. Finally, the prosthetic tree offers multiple more ways to approach different encounters, with the option to upgrade your shuriken throw with a follow-up attack that closes the distance between you and your opponent, or to let you throw multiple shuriken.

What we saw of these trees was fairly simple, though they weren’t final. We saw about three or four pathways to take our skill tree, with the final tier of skills requiring four skill points. How long these skill points will take to earn is still up in the air, however. The goal is to allow you to be “more creative and find your preferred ninja style, so you’ll have to specialize and think [about] which path you want to take,” Kitao says.

While the skill tree lets you build out The Wolf in various ways, upgrading his other stats will require more attentive eyes. As you venture through Shadows Die Twice, slay enemies and bosses, and find hidden rooms, be on the lookout for prayer beads, four of which will increase your overall health and posture (The Legend of Zelda’s heart pieces come to mind). You might also find tools to upgrade your prosthetic arm with new abilities, such as a shuriken launcher, an axe, or a flame vent, granting you access to new abilities to take with you on the battlefield. There might even be ways to build on the resurrection mechanic, From tells us.

All of these options make for one well-equipped character instead of several kinds of specialized warriors. From says this style of progression, which streamlines options at the cost of variety compared to Dark Souls and even Bloodborne, lets them focus on offering more overall depth to individual encounters, as From can more easily tailor encounters around your character’s skillset. “This is actually using Miyazaki-san’s own words – You could think of the previous Souls games as more expanding laterally, and adding breadth to these various options and builds,” Kitao says. “While you are a fixed shinobi protagonist, you do feel like there’s a sense of progression, there’s a sense of building your own character and finding your own playstyle, and experimenting with this throughout the game.”

For more on Sekiro: Shadows Die Twice, make sure to check Game Informer throughout the month, as we’ll have stories outlining various aspects of the game, like why it doesn't have online multiplayer, all this month. Click on the banner below to see all of our coverage.

sekiro
sekiro hub
On
On
Off
Off