Epic Games, developer of titles like Fortnite, the first Gears of War trilogy, and Unreal Tournament, has announced the creation of a new digital PC store that hopes to compete with Steam by offering an unprecedented revenue split for developers.

The Epic Games Store is launching as a full-fledged game marketplace supporting all sorts of titles. The Fortnite developer hopes to incentivize developers to come over to the Epic Games Store by pushing the revenue split for software further than any platform holder has before, giving developers 88 percent of the revenues while keeping 12 percent for overhead. This is a big change considering the traditional industry standard for digital revenue split usually gives 30 percent to the store owner, whether it be Sony, Nintendo, Microsoft, Apple, Android, or Valve. Perhaps anticipating this move, Valve recently made adjustments to Steam's revenue model, but only above certain thresholds that most games won't hit.

“As a developer ourselves, we have always wanted a platform with great economics that connects us directly with our players,” Epic Games founder and CEO Tim Sweeney said in a press statement. “Thanks to the success of Fortnite, we now have this and are ready to share it with other developers.”

The absurd amount of money that Fortnite makes every day clearly allowed Epic to invest the money into making this more developer-friendly store. The company also made this change with its Unreal asset store earlier this year, again citing the massive profits from Fortnite as the reason they can afford a thinner profit off store purchases.

Another prong of Epic's developer-friendly approach is waiving all Unreal Engine royalty fees for revenue generated on the store. If a developer's game uses UE4, copies sold on Epic's store don't give a separate percentage to Epic, encouraging developers and publishers to direct their fans to the Epic Game Store and buy there. To get anywhere close to the same revenue split on Steam, a creator would have to make $50 million in revenue on Steam alone before getting to an 80/20 split, with engine fees still on top. 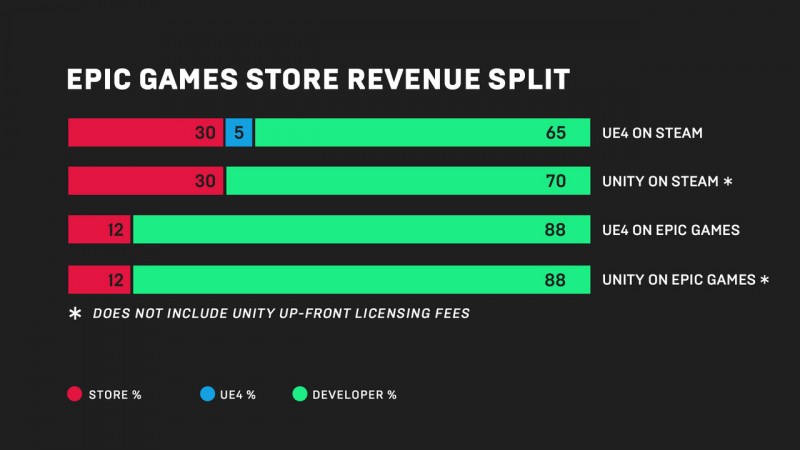 Despite Epic being the creators of the Unreal Engine, there's no limitations for what kind of games can appear on the store. Whether developers use Unity, GameMaker, or any other engine to make your games, Epic is willing to sell those titles under its umbrella.

In tandem with the store announcement, Epic also plans to launch a Support-A-Creator program, which connects developers to YouTubers, streamers, etc. These developers can share a percentage of their revenue with video producers who make content about their game, with Epic covering the jumpstart costs for the first five percent.

Epic plans to hand-curate its store, which might entice both developers and consumers away from competitors, especially with many expressing frustrations about the poor visibility for software in crowded marketplaces. How that looks in practice is still anyone's guess, but if executed correctly it could answer some complaints that have been boiling for years.

The Epic Game Store is launching soon and is being built out of Epic's current launcher. We got a chance to talk with Epic founder Tim Sweeney and ask him a few things about the store, including questions about DRM, how games are curated, and whether the store will be home to any exclusive games.