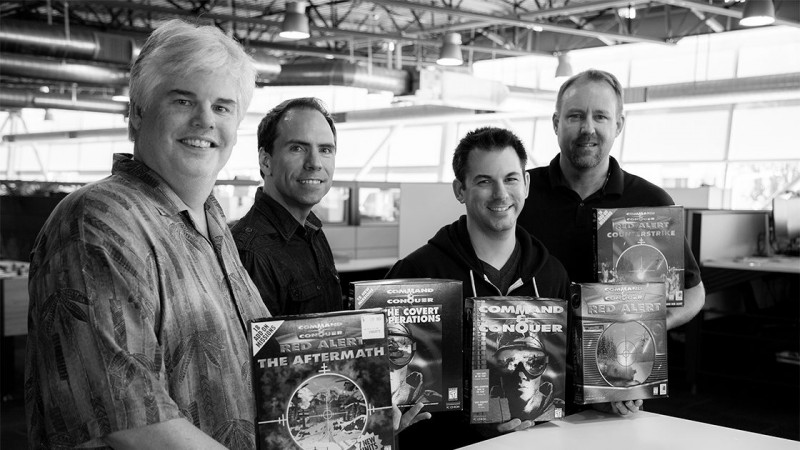 Last month, EA announced an intention to bring Command & Conquer back in the form of remasters, rather than the mobile endeavor the company showed off at E3 earlier this year. Far quicker than anyone thought, EA is seemingly ready to announce exactly what it has been cooking up, today announcing remasters for Command & Conquer: Tiberian Dawn and Command & Conquer: Red Alert, with all the expansions in tow.

Tiberian Dawn is the working title for what was simply released as Command & Conquer, the original 1995 PC game from Westwood Studios. It makes a lot of sense for the first game in the series to be chosen, but EA have also heard from the community that Red Alert is a more well-loved game, so that is also getting the remaster treatment.

"We have decided to remaster Command & Conquer: Tiberian Dawn," creative director Jim Vessella writes in a blog post for the announcement. "And while this is incredibly exciting on its own, we’re also aware of how passionate the community is about the Red Alert universe. So, we will also remaster the original Command & Conquer: Red Alert. But what about the classic expansion packs you may ask – Covert Ops, Counterstrike, and Aftermath?  Well, C&C and Red Alert wouldn’t be the same without them, so all three expansion packs will be bundled with the base games into one remastered collection – without microtransactions."

Additionally, EA is contracting Nevada developer Petroglyph Games for the remaster, a studio made up of former Westwood staff that got together when EA shut Westwood down in 2003 to assimilate into EA Lost Angeles, which is now called DICE Los Angeles. Basically what this means is that the two remastered games will be made by many of the developers who worked on the titles originally.

"Joe Bostic is known as the co-creator of C&C, having also served as the Lead Programmer on Tiberian Dawn and Red Alert. Steve Tall joined Joe as a Lead Programmer on Red Alert, and Mike Legg contributed to all forms of audio systems at Westwood, having been an employee since 1986! All three members helped start Petroglyph Games in 2003 after the closure of Westwood and are joined by a veteran group of RTS developers from the past 15+ years. And don’t think we haven’t noticed the #1 request from the community in all the comments from the past month...  You want Frank Klepacki. So as a cherry on top for the fans, we are thrilled to announce that Frank will be re-joining Petroglyph Games to be our Composer and Audio Director for the remaster collection!"

EA notes that the Command & Conquer Remastered Collection has yet to even start development, so it might be some time before we see anything from this, but they do seem to be handling it appropriately for a company that was once stringently against remasters of any kind.