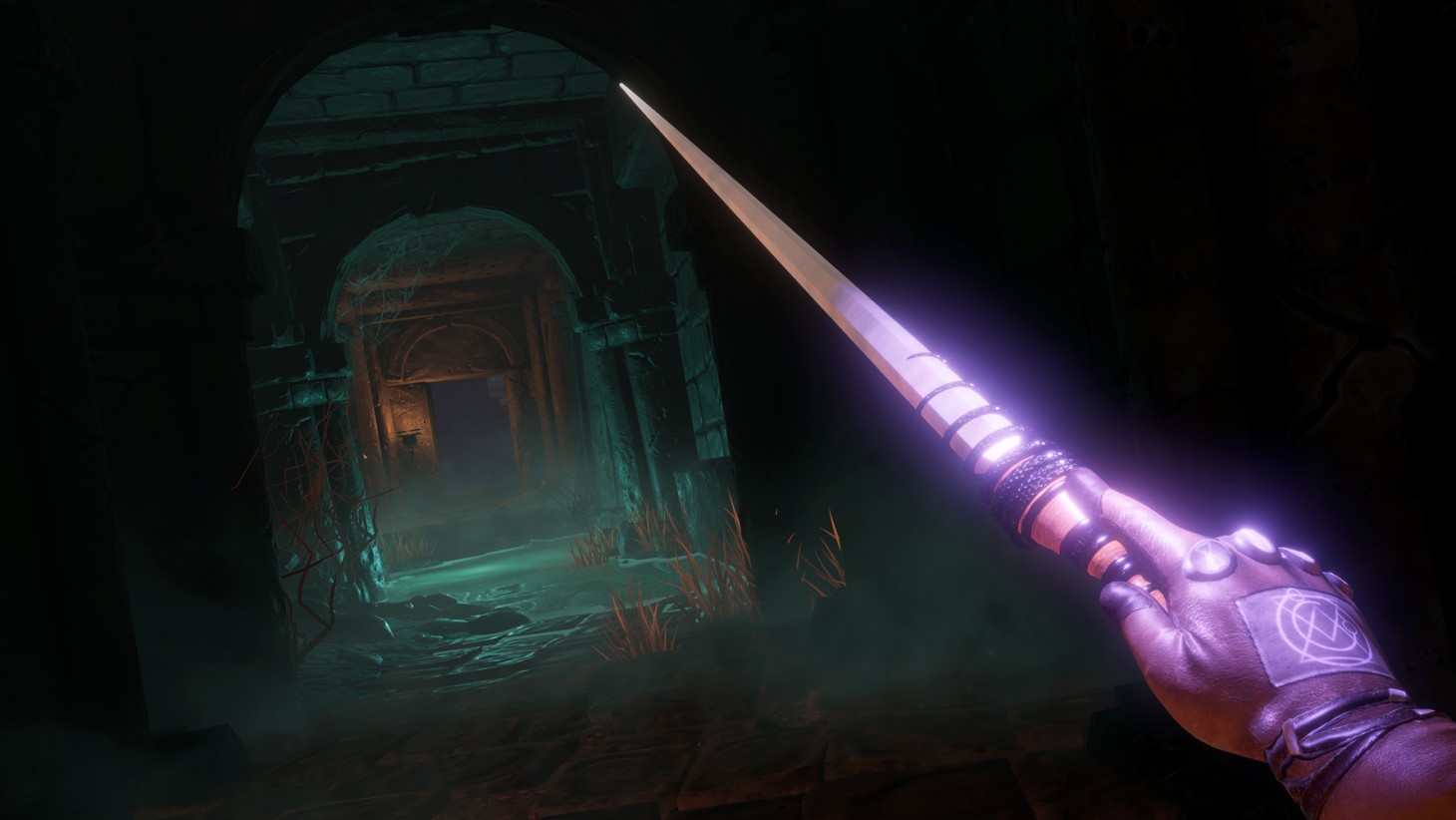 Through The Looking Glass: Hands-On With Underworld Ascendant

In 1992, Looking Glass Studios (then Blue Sky Productions) pioneered the first immersive sim with Ultima Underworld. With its non-linear, story-driven gameplay and 3D environment, the Stygian Abyss, Ultima Underworld paved the way for future generations of games like Deus Ex, Bioshock, and Thief. In 2000, Looking Glass Studios disbanded, however, its talent scattering like seeds in the wind to leave their mark on other successful franchises. But with the founding of OtherSide Entertainment in 2014, much of Looking Glass’s talent has returned to continue what they started. With a 14-person team of seasoned industry veterans, which includes credited immersive sim creator, Warren Spector, and developers from Irrational Games to Fullbright, OtherSide Entertainment is creating the follow-up to Ultima Underworld with Underworld Ascendant. To bring something new to the formula, the team is diving deeper into concepts that the immersive sim was founded upon, giving players a wider array of tools and options and dropping them in a dynamic and highly interactive world. Last week, I had the opportunity to sit down with writer and game director Joe Fielder to play the game and see just how deep these mechanics go. 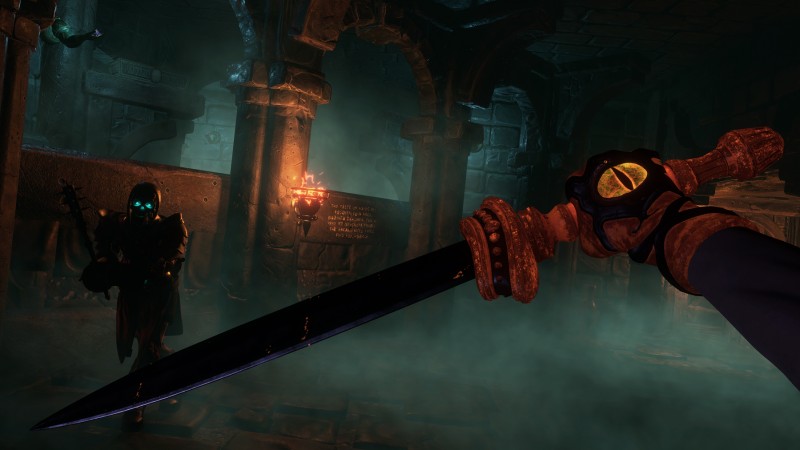 Underworld Ascendant begins with a brief character customization process, allowing you to pick your skin tone, build, and voice (which also determines gender). From there, you’re immediately dropped into the depths, as your mystical guide and narrator Cabirus informs you that Typhon, “father of monsters” and “nemesis of Zeus” is close to breaking free, threatening the destruction of your world and the Stygian Abyss. To stop the primordial threat, you must unite the factions and learn the secrets they once used to contain Typhon. But first you must learn how to survive this brutal environment, which involves no small amount of creativity.

In Pluto’s Gate, the first task I’m given is a basic one – I must “escape,” Cabirus says off-screen in his ethereal bravado, voiced by Stephen Russell, who’s known for playing Garrett in Thief, Corvo Attano in Dishonored, and Nick Valentine in Fallout 4. Cabirus says that I must get past a locked door. Simple enough. Now I only need to locate the key or pick the lock to make my exit. But after all my years playing similar open-world games, I forget a simple truth: The door is made of wood. “In time, you could beat it down,” Cabirus says, noting the possibility of hacking through the door with your fists or a weapon, “or simply apply fire.” Indeed, I find I can pick up a wooden chair and ignite it over a brazier, then hold it against the door until the door is reduced to ash. In Underworld Ascendant, creative solutions to problems like this abound, and they generally revolve around the physical properties of objects or the delicate interplay between light and dark, and water and fire. If I want to avoid the icy gaze of a skeleton watcher, I can pick up a water bottle and throw it at one of the torches to douse the flame and darken the hallway. I can cook a leg of “mystery meat” by holding it over the open flame of a brazier. And objects have weight, so while I might be able to throw a cup at a lever, sometimes I’ll come across a heavier object that can only be carried and dropped onto a mechanism-activating pressure plate. 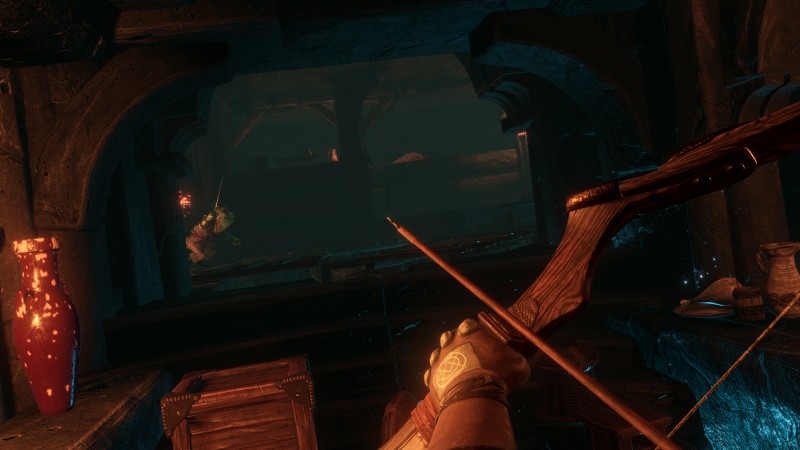 Players need to cleverly approach their environment to get past obstacles, which becomes evident when I begin the Challenge of Ishtass. After entering a large, spacious cavern, I encounter a platform patrolled by skeletons. A caged monstrosity hangs above them, looking like a giant, levitating face-hugger from Alien, only with an oversized brain for a head. A “mind crippler,” Fielder tells me; it’ll attack the skeletons if I release it, but it would “be prudent” to avoid its detection. Already, I have a couple of ways to get to the treasure on the other side: I can rain arrows down on the skeletons or attack them head-on with any number of junk items I’ve amassed. I can also sneak around and hit the lever to release the mind crippler if I’m quiet. However, there is another option that no one points out. I notch an arrow and fire it at the lever, then another, and another. After a few missed attempts, I finally get one of my arrows to ricochet off a boulder, striking the lever and releasing the groping tentacles of the mind crippler upon the hapless skeletons, which enables me to sneak around and snag the loot on the opposite bank.

The entire RPG system in Underworld Ascendant is built to encourage player creativity, interactivity, and immersion. When players start the game, for example, they aren’t allocated skill points, but are encouraged to navigate the world and acclimate to the systems. To encourage this, players are awarded skill points for completing “feats.” Feats, in Underworld Ascendant, are milestones and achievements players earn by overcoming new obstacles and figuring out the game’s systems such as killing a skeleton without being touched. There are three major skill trees: fighter, magic, and stealth. Spells in the game are largely about hacking physical properties, Fielder tells me. The Assemble spell allows mages to amass a number of items from the environment and build a bridge, which can also be used as a weapon if you light it on fire or drop it on foes. The stealth tree stacks damage bonuses for sneak attacks and includes the dash skill, which is essentially a short-range teleport. When it comes to the fighter tree, Fielder also points out how “combat is focused on movement, not just damage bonuses.” And indeed, much of the fighter tree is devoted to mobility, parkour, and getting the most out of your environment with skills like wall-run and double-jump becoming unlockable at higher levels.

In the start of the game, like in the original Stygian Abyss of Ultima Underworld, players will struggle to survive as they’re limited to the tattered rags on their back. Food plays a role in the game as hunger ravages health, and cooking or pickling your foodstuffs becomes essential for removing negative status effects or adding positive ones. For a while, players will mostly be discovering broken equipment and rapidly deteriorating weapons. But as they progress they’ll be able to find rarer items, studier armor, and more powerful tools to add to their arsenal. 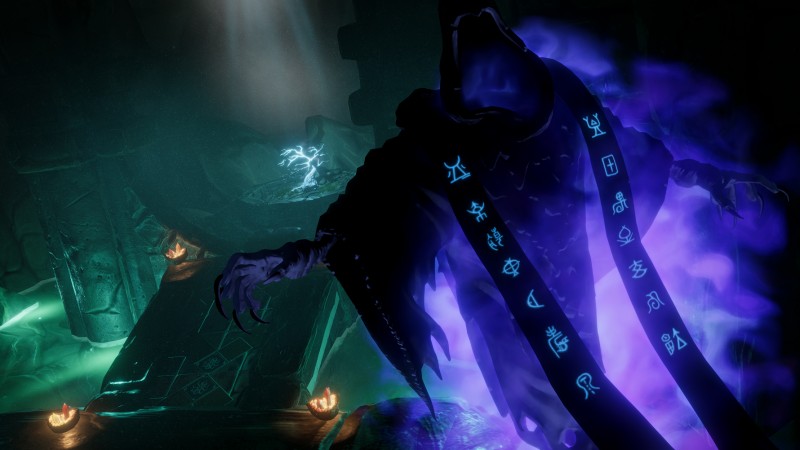 In one pre-loaded account, Fielder shows me the axe of Phobos, which breaks enemy morale with a successful parry. There’s also the jewel of befuddlement, which Fielder jokes is essentially a flash bang grenade, for those ungifted in stealth. Wands can be found which are branded with a single spell, and runestones can be added to your runebag, which allow you to create custom spells. During my playthrough, I find the Heal rune word, and am able to dual-wield two runestones, casting healing spells on myself with a flourish of wrists and levitating stones like Dr. Strange whenever I run into trouble. For archers, different types of arrows exist like water arrows, fire arrows (which can be made by dipping standard arrows into a torch), and blast arrows, which release a blast of compressed air upon impact. At one point during my playthrough, I find a left leather boot, which grants a status boost to mobility, but when I equip it, the bonus is cut in half since I lack the corresponding right boot. Also making its return from Ultima Underworld, players can plant the seeds of the hallowed Silver Sapling in patches of soil to set custom respawn points when they die.

The Stygian Abyss was the first world to play home to an immersive sim, and Fielder is quick to point out that it is a character unto itself, inspiring other failed subterranean utopias like Rapture in Bioshock. And the new abyss has a lot of character, too with its colorful tabletop mini-figure art inspiration and myriad factions. During my playthrough, I only see the bipedal Lizardman tribe, the Saurians. But the game is full of races, such as: The Shamblers – a “fungal hivemind” – the deep elves who can gift players enchanted weaponry, and the Dwarven Expedition who can forge master-crafted armor. 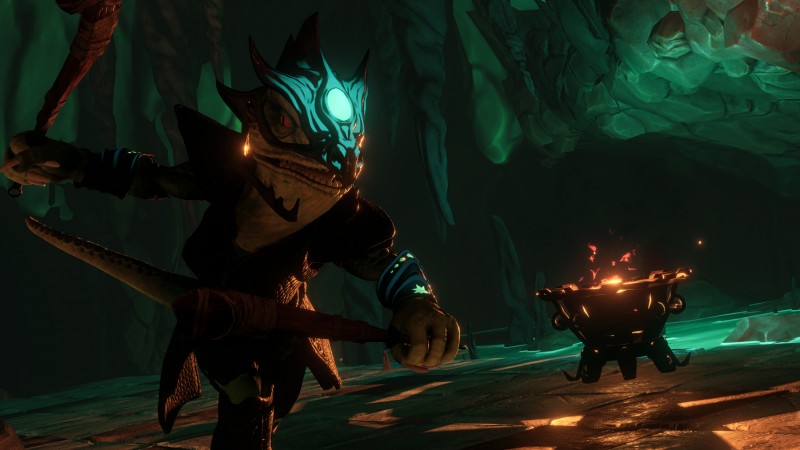 The environment itself is also quite attractive. The failed utopia incorporates lava-flooded caverns and mist-covered dungeons and small details like graffiti written in the Lizardman language. Glowing lotus-like flowers propel themselves through the darkness like bioluminescent jellyfish. But the setting isn’t just for show. While the world isn’t as sprawling as some contemporary RPGs, the Stygian Abyss is constantly evolving.

“Within the game, there’s a degrading world state,” Fielder explains. “As you play through the game, creatures from the lower abyss start to crawl up to the higher levels.” There’s also a faction known as the Outcasts who are constantly expanding their construction efforts, meaning new ramparts and platforms might be built up (or torn down) when you return to a former location. 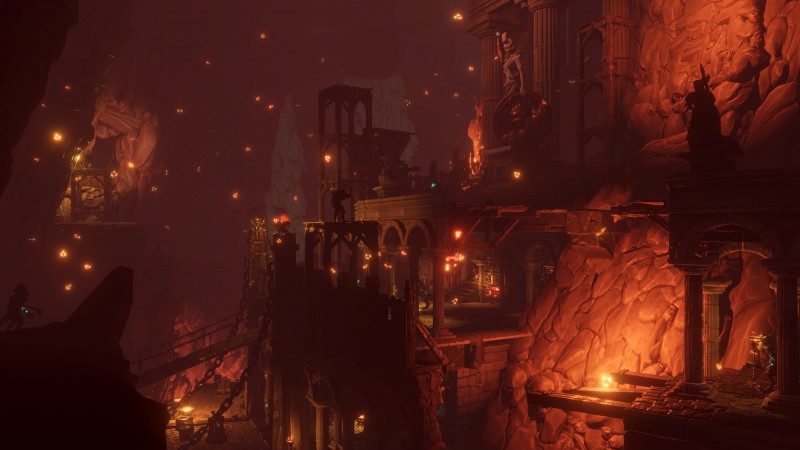 During my brief time with the game I was pleasantly surprised with what I was shown. While Underworld Ascendant might not be as polished as some of its triple-A contemporaries, the small but talented indie team of OtherSide Entertainment is doing something different. Focusing on its core world and players’ ability to interact within that environment as opposed to other modern games’ sprawling but less interactive worlds, the team is shooting for quality over quantity, which is appropriate, considering the small team’s relationship to what Fielder calls the “grandfather of immersive sims.” Underworld Ascendant is coming to PC on November 15 and to consoles in 2019. As a fan of games like The Elder Scrolls V: Skyrim and Bioshock Infinite, I saw a lot to like from this indie offering, and for only $30, I’m eager to dive back into the abyss to more fully immerse myself in its depths. 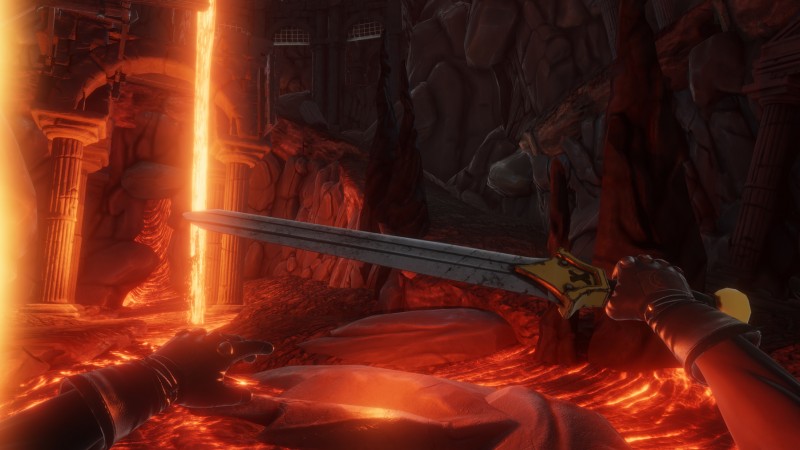 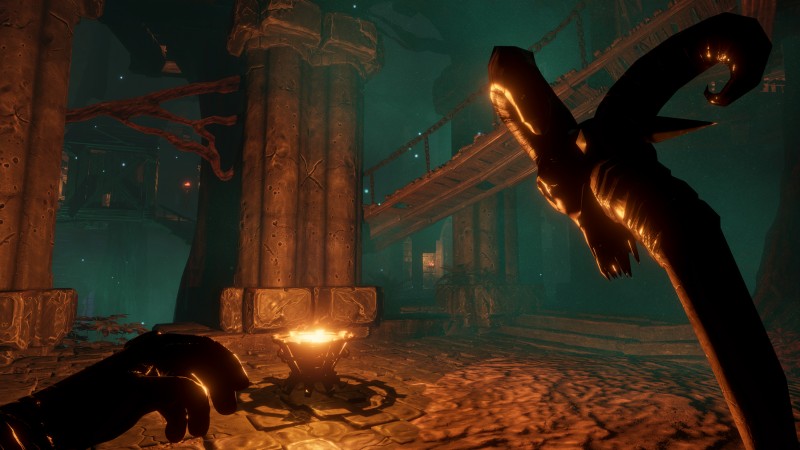 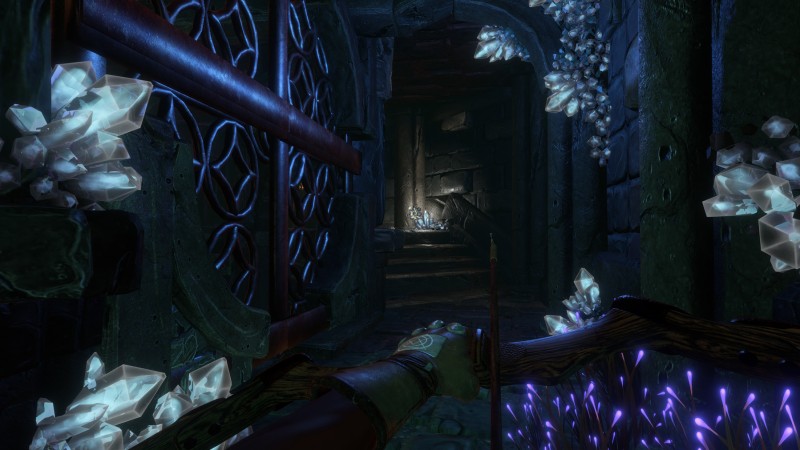 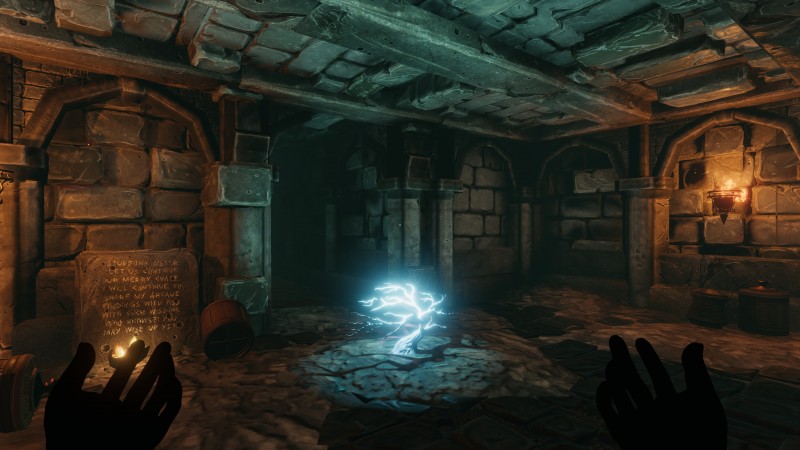