The Gang's All Here: The Seven Characters Returning To Red Dead Redemption II

As we get closer to Red Dead Redemption II’s release on October 26, Rockstar Games continues to reveal precious nuggets of information about its massive sandbox. However, most of the game remains a mystery. Since Red Dead Redemption II is set twelve years before the original, there is a fair bit we already know about its world and the people that inhabit it. Ultimately, the Van der Linde Gang tale is a tragedy that will end in death and betrayal. Red Dead Redemption is almost ten years old, so we dust off some memories and reexamine the finer points of the familiar characters to imagine what we might see in Red Dead Redemption II. 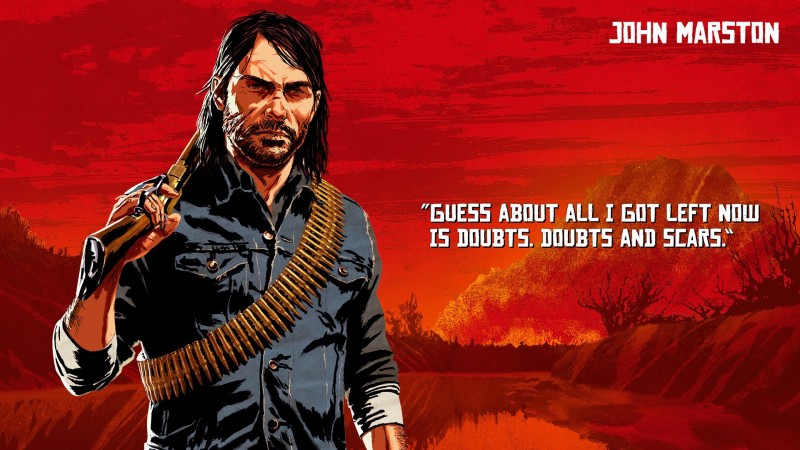 Red Dead Redemption’s main protagonist returns, but this time around he takes a back seat to Arthur Morgan. Red Dead Redemption II is set in 1899, so John is around 26 years-old and already a father (and probably a husband). The son of a Scottish immigrant and a prostitute, John became an orphan at the age of eight and fell in with the gang sometime in his teens. In his later years, we know that Marston is intemperate. He can’t let something pass without a smart remark and is not afraid to solve problems with his gun. These traits are sure to put him at odds with fellow gang members. However, he may win some over with his unbreakable sense of loyalty, earnest compassion for the downtrodden, and his respect for merit regardless of societal rank, race, creed, or gender.

Part of the Gang: An orphan looking for family and meaning in life found a father figure in Dutch. The gang’s leader was willing to educate him but also manipulate his anger, loyalty, and naivety to make him believe he was creating a better, purer, world one bank robbery at a time. Not everyone in the gang is as content with John as Dutch, though. In Red Dead Redemption, Bill recalls meanly that John “always did have a high opinion” of himself and Javier convinced Dutch to leave John to die in a botched robbery. A mistake that would come back to haunt them twelve years later.

Final Fate: Mowed down in a barrage of bullets at his peaceful ranch after being betrayed by the government. 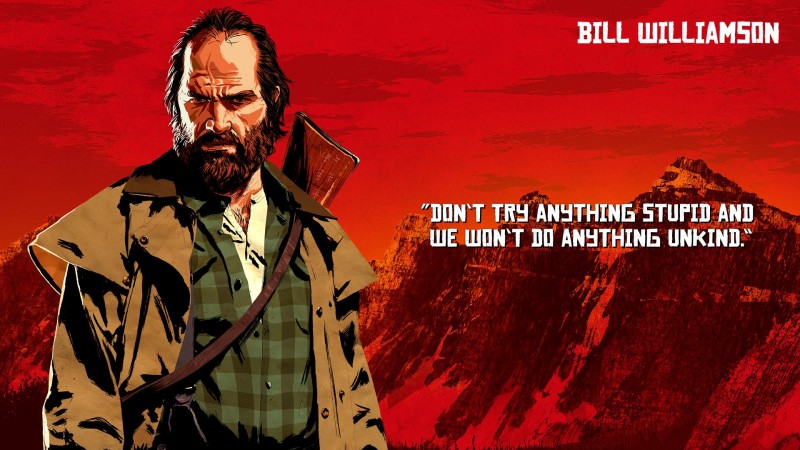 A bully at his core, Bill Williamson is dumb and bad-tempered. He must have had some redeeming qualities, though. John Marston seems the most reluctant about killing Bill in Red Dead Redemption and readily counts him as a brother. Rockstar hints that Bill was dishonorably discharged from the military. Unsurprising, seeing as how he dislikes being ordered around and completely lacks self-control. When he sees red, Bill lashes out, no matter the consequences. Dignity and honor aren’t high on his priority list; he grovels to distract John from shooting him in Red Dead Redemption only to attack while John’s guard is down. He obviously doesn’t think things through because grabbing for his gun meant certain death. Maybe, feeling betrayed, spite wins out in the end and Bill just wants to take John with him to the grave.

Part of the Gang: In the gang, Bill can indulge his violent tendencies and puff up his easily wounded ego by threatening others. John and Abigail Marston both call him an idiot in Red Dead Redemption, hinting at fractures in the gang. Dutch probably noticed Bill’s stupidity, but intelligence isn’t exactly a crucial ingredient in a strong-armed robbery. Also, if Bill was given a dishonorable discharge, the gang would have been a haven from judgment and a chance to wreak revenge on the world. Once the gang disbanded, Bill led his own merry men until he became a big enough problem for the government to intercede. He couldn’t – or didn’t want to – keep his men under control, forcing the government’s hand. Agent Ross sought out John and he began the systematic destruction of the remaining ex-gang members.

Final Fate: Bled out in the Mexican dust after being tracked down by John. 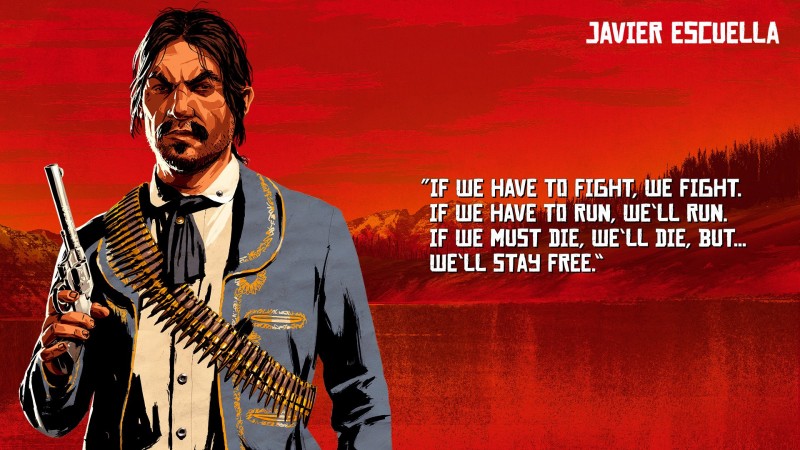 Craftier than Bill Williamson and more prudent than John Marston, Javier Escuella, will have an important role in the Van der Linde gang. His antics in Red Dead Redemption paint a picture of a resourceful hypocrite. We know that his father was a drunk that worked on another man’s farm in Mexico and that Javier got swept up in a revolution sometime before joining the Van der Linde Gang. Javier has a way with words and can sweet-talk his way out of a problem with an easy laugh and a killer poker face. He is not above letting others do the fighting or sinking to an underhanded trick if it accomplishes his goal. He is fine with putting his own welfare before ideals and compatriots. Ever advertising his deadliness, Javier proudly hangs a bandolier over his shoulder.

Part of the Gang: The Van der Linde Gang was an escape from the life of a poor farmer, the hardships of revolution, and the path to wealth. Dutch might have needed some level-headed charmers, like Javier, to take on more diplomatic cons. Javier may be instrumental in leading the gang to ruin in Red Dead Redemption since John condemns him alongside Dutch for going crazy and betraying him.

Final Fate: Delivered to the waiting arms of the American government by John, dead or alive. 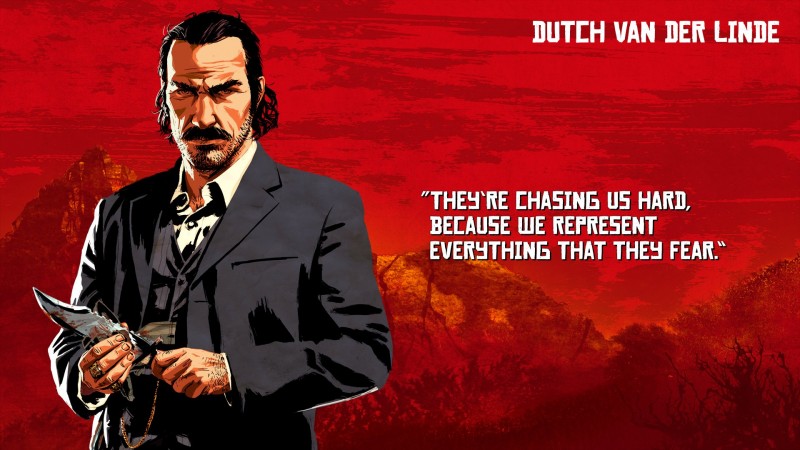 Dutch is a cold, charming, and ruthless leader of men. He chases the dream of a free life and sees himself as a hero figure. In van der Linde’s mind, he is saving his gang members from the atrocities of civilization. For him, life on the frontier the only honest and pure way to live. His generosity, however, only goes so far, and he doesn’t balk at sending his sheep to the slaughter. He is smart and capable of spectacular mental gymnastics when, in his mind, the ends justify the means. Dutch is a formidable adversary, good shot, morally flexible, and skilled strategist. He is also terrifyingly calculating and can steer a situation in his favor by manipulating his opponent. Dutch is capable of affably exchanging pleasantries while holding a gun to a young women’s head before shooting her and calmly strolling out of the room. He probably pats himself on the back for devising such good getaway cover, knowing that everyone will check on the women before coming after him. A well-spoken and charismatic devil, Dutch inspires men to follow his dream to their doom.

Part of the Gang: As leader, Dutch fans the flames of his self-worth while fighting against the soul-crushing progress of civilization and the tyranny of governmental authority. He is a father figure to the gang; one outlaw refers to its members as the sons of Dutch. Though initially, Dutch seems to want a better life for everyone, things eventually begin to unravel. In Red Dead Redemption, John accuses Dutch of shooting a bunch of people “unfair like” and abandoning his gang family after a robbery gone wrong. Red Dead Redemption II will likely focus on the problems bubbling up in the Van der Linde Gang before that eventful holdup.

Final Fate: Unable to admit defeat or change his ways, Dutch commits suicide by jumping off a cliff. 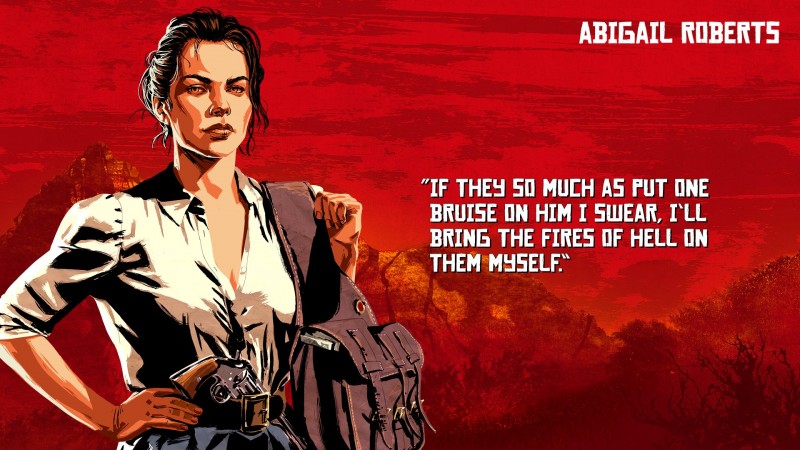 Not to be trifled with, Abigail Marston is quick with her gun and wit. An orphan who grew up without family or protection, her years dealing with shady characters in bars and brothels made her a student of human behavior and can quickly read a room. Her tough exterior hides a devoted companion and, after earning her trust, she is a stalwart ally. It’s no secret that she slept with several members of the Van der Linde Gang, but at eighteen years old, she had a son with John Marston. Though not one for sweetness, Abigail is always honest and has a fine-tuned sense of right and wrong. Make the wrong move, though, and she will prove more ruthless than many of her male compatriots.

Part of the Gang: For a young girl with no home, gang life was a step up. Thanks to Dutch’s gang, she could get away from the brothels and gain a little agency over her life. Dutch would have recognized a strong-willed and ruthless person could only better the group. Grateful for independence, she would work hard for the gang and kill when needed.

Final Fate: Died of unknown causes on her ranch a few years after John. Jack buried her next to his father. 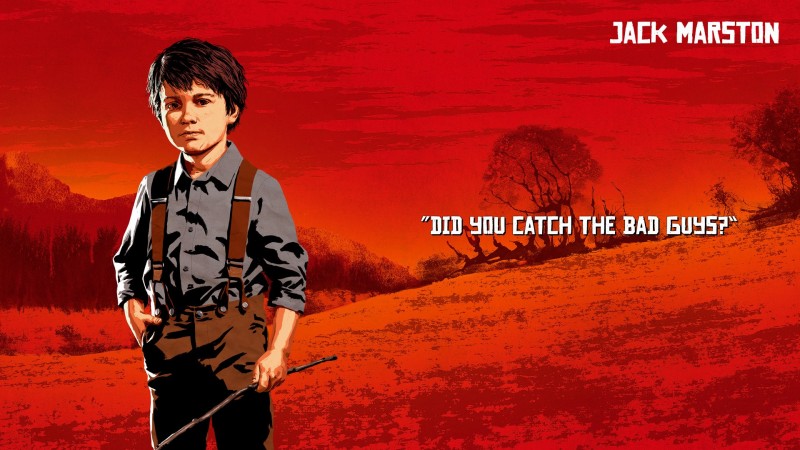 Jack, the son of John and Abigail Marston, was born into gang life. Curious and bookish, he feels like John doesn’t view him as a real man. Concerned with his father’s disapproval, he tries to prove himself with reckless tasks too dangerous for a young boy. Overall, Jack is good-hearted – when the angst of youth isn’t acting up. He loves his parents deeply and remembers his time with the gang fondly. Jack refers to Bill and Javier as uncles and reminisces about their adventure stories, meaning he was kept pretty insulated from any actual gang activities. The apple doesn’t fall far from the tree, Jack can be hot-headed, shows a deep esteem for women, values education, speaks honestly, and gives respect to those who earn it.

Part of the Gang: Unlike the others, Jack was born into a life of crime. Dutch probably saw the potential in having someone completely dedicated to – and raised by –the gang. Jack Marston likely embodied Dutch’s hopes for the freedom of future generations. Abigail expressed a deep desire in Red Dead Redemption to give Jack a better life and may have clashed with John about fleeing the gang to give their son an honest future.

Final Fate: Despite his aptitude for learning, owning land, and his parents’ wishes that he become something respectable Jack Marston ends up a frontier gunslinger. In the end, he takes revenge on the aging agent Ross who killed his father. 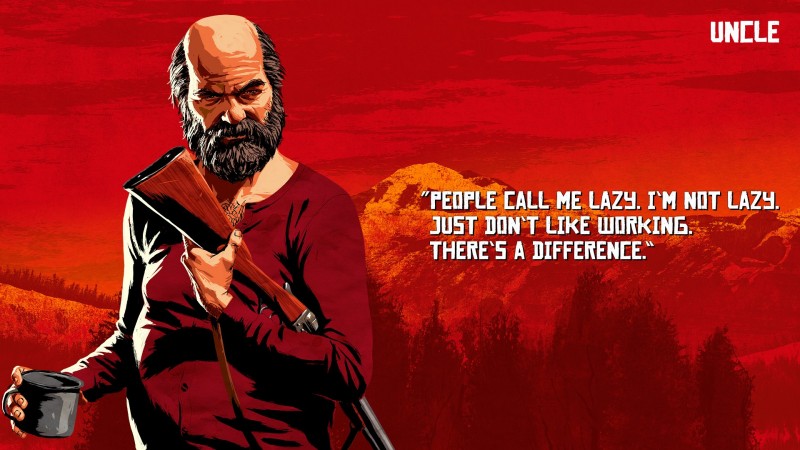 One of the oldest members of the gang, Uncle, whose real name is unknown, is a legendary lay-about. He has an affinity for drinking and only a fool would depend on him to complete a task. Despite this, he has a talent for ingratiating himself with important people. Though his slippery ways are frustrating, he is a kind person, skilled shot, and a competent horseman. Uncle’s sour sarcasm belies his affection for those around him but, in dire circumstances, he defends his family. You get the sense that uncle never missed a meal if he had the choice. In Red Dead redemption II, he has stuffed himself into long underwear, probably not having felt the need to put more effort into dressing than necessary.

Part of the Gang: Easy life, easy money, and easy pleasures. It isn’t hard to figure out why Uncle might have joined the gang – but why they let him stay is a mystery. Uncle isn’t particularly useful but embraced the life and was a decent shot. When John and Abigail broke away from the gang to start a new life, Uncle came with them.