After years of neglect, EA Vancouver finally gave one of the older franchise mode components a much-needed overhaul in NHL 19. Gone is the inflexible system that gave you little information to go on when making draft-day selections. The new scouting system has been rebuilt from the ground up to give GMs the flexibility they need to identify and evaluate talent prior to turning in that pick card before the draft timer expires.

Your duties as general manager extend beyond draft day as well thanks to the new Fog of War mechanic. The longer you go without scouting pro teams, the less likely you are to have reliable information when it comes to making trades and signing free agents. Keeping tabs on your rivals can now spell the difference between making savvy trades that put your team on a Stanley Cup trajectory and being the next Marc Bergevin, making a series of questionable decisions that inevitably set your franchise back.

With 20 scouts at your disposal and hundreds of prospects to research, keeping tabs on all the activities can be dizzying. I’ve spent dozens of hours poking and prodding the new system trying to maximize my returns both in free agency and during the draft. Here are some simple tips to get you ahead of the game. 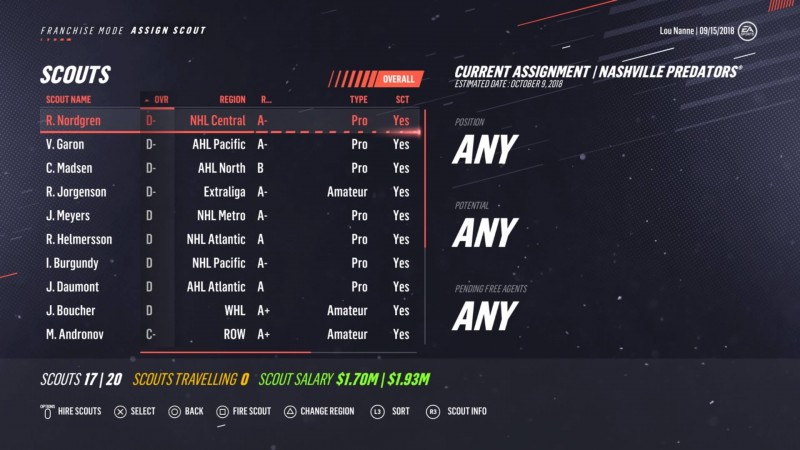 Regardless of which organization you take over, expect to find some bad apples on your scouting staff. Purging the ranks of weak talent evaluators should be your first order of business. If you’re playing owner mode, this may be a multi-year process because you don’t want to eat too many contracts while also trying to sign new scouts. In that case, fire the bad scouts with a year left on their contract and start planning for which scouts you intend to sack in subsequent years. Each year, a flood of new talent rushes into the free agency pool (some of them being retired NHLers), so there should always be a couple A or B-rated scouts to add. Why are good scouts important? They take less time to perform evaluations, deliver full scouting reports much faster, and identify more gems and busts.

When you take over as GM, not all your scouts may be in roles where they can generate the best reports. To find out what they do best, press R3 to look at the scout profile and tab down to the Regional Familiarity page. Here, you can see which regions they are best suited to scout. Write down every area where your scouts have A-rated efficiencies and then see where they are currently assigned. If they aren’t in a region they excel at scouting, make some swaps until you are generating the best coverage. Keep regional efficiencies in mind when hiring new scouts as well. You may need to rework their assignments as you bring in new talent.

A vast majority of prospects may be concentrated in Canada, but that doesn’t mean you should have all your scouts stationed in the great white north. Make sure you have scouts in every major region – Canada, USA, Russia, Scandinavia, and Europe. I like to operate with 12 amateur scouts, which allows me to cover all the most competitive leagues, as well as have a few rovers for the less populated places like the DEL, Extraliga, NLA, etc. Because of the wealth of Canadian prospects, I have four scouts for the three Canadian regions, using one to travel between the WHL, OHL, and QMJHL as needed to generate more reports. 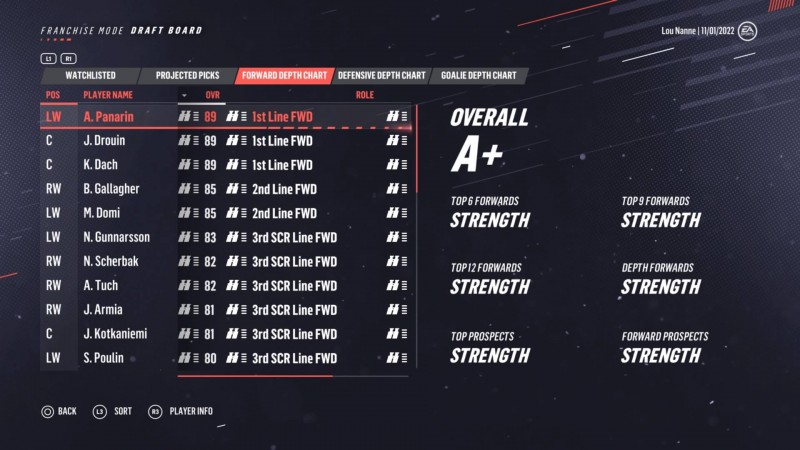 Before you jump into View Draft Class, analyze your organization’s prospect pool to figure out what your weaknesses are. Are you lacking grinders and two-way forwards in your bottom six? Do you have a dearth of offensive defensemen? Maybe you lack a pure sniper? Once you understand your organization needs, jump into the View Draft Class menu and seek these positions/archetypes out. You still want to draft the best players available in every round, but knowing when there are players who are good but also fit positions of need is a great tiebreaker when looking at two prospects with similar skill and potential. When you press R3 to see a player’s info that matches your weakness, you should see the button option for scouting the player. If you don’t, that means a scout is already assigned to check out the player.

The most important factors when scouting prospects is understanding where their skills are currently at and prognosticating if they have the potential to get better. These should always be the reports you demand from your scouts first. You can also ask for reports on a prospects’ playing style, strengths and weaknesses, and character. These are helpful when getting the full picture on a prospect, but not nearly as essential as the other two.

One of the nice things about the NHL 19 scouting system is the scouts won’t sit idle. Once they generate all the prospect reports you requested, they will create their own to-do list. But sometimes these don’t align with where you want them to scout. I try to revisit the View Draft Class menu at least once a calendar month and make sure they are scouting the targets I am most interested in learning more about. In years where I have multiple picks in a particular round, I make sure to have a full picture of the players most likely to be available when those picks are bound to happen. It’s time-consuming but can make a big difference on draft day.

Know When It’s Time To Move A Scout

Don’t waste your scouts’ time generating super deep reports in shallow prospect pools. Once your scout has a good sense of what the players ranked in the top 225 offer, move them to another region to maximize your number of reports on the players most likely to be drafted in the seven rounds. This is especially critical in Europe, where the DEL, Extraliga, NLA, and EBEL frequently have smaller pools you can burn through quickly. Once I’ve canvased all of these and feel good about the information they’ve generated, I send these scouts to reinforce the larger Scandinavian player pools. 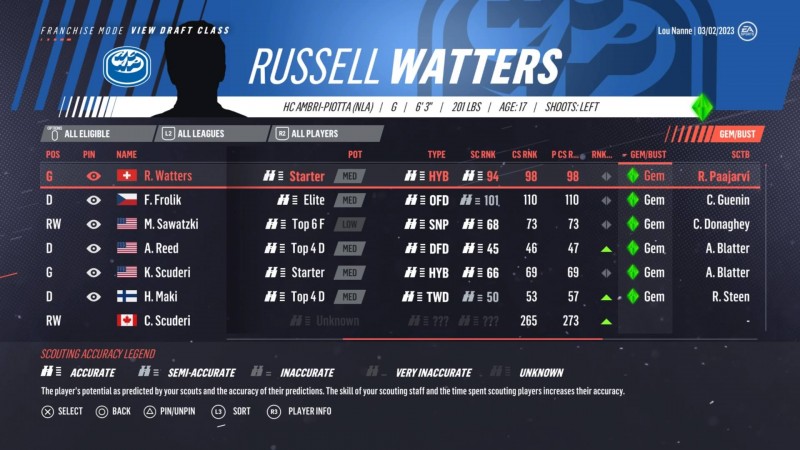 Trust The Gems And Busts

Over the course of their talent evaluation duties, your scouts will generate a list of gems and busts for each draft class. According to NHL producer Gurn Sumal, these are true evaluations that won’t backfire on you, so avoid busts by all means, and make sure you position yourself to draft the gems, even if it means trading around the draft board.

Sometimes your scouts don’t get a great look at a player’s potential on the first visit. The bars to the right of the binoculars icon tell you how accurate that evaluation is. When you see a foggy two-barred “AHL Top 6 F Med” rating, don’t believe it. Once you get a complete picture of his potential, it can skyrocket upward (or downward). For instance, one player I scouted was originally thought to be a top-six AHL forward – not someone you want to invest more time in, right? But I generated a second report on his potential anyway and it went up to a medium potential top-six NHL forward. That’s quite a vast evaluation gulf.

Aim For Steals In Later Rounds

As you get deeper in the draft, your priorities should shift from finding guaranteed studs to prospects who may outperform their draft position. This is when I like to splurge on Low Elite-rated prospects who have boom or bust potential. If they don’t pan out, it won’t hurt your organization as long as you’re drafting well in the first three rounds. But if you hit on a stud, it can either strengthen your NHL club or give you a valuable trade chip.

Scout Prospects Even After The Draft

If you missed out on a few prospects you really liked during the draft, keep tabs on them during the early part of your pro career by generating new scouting reports. The team they are on could end up mismanaging their development early on and you could get them for well below true value in a savvy trade. 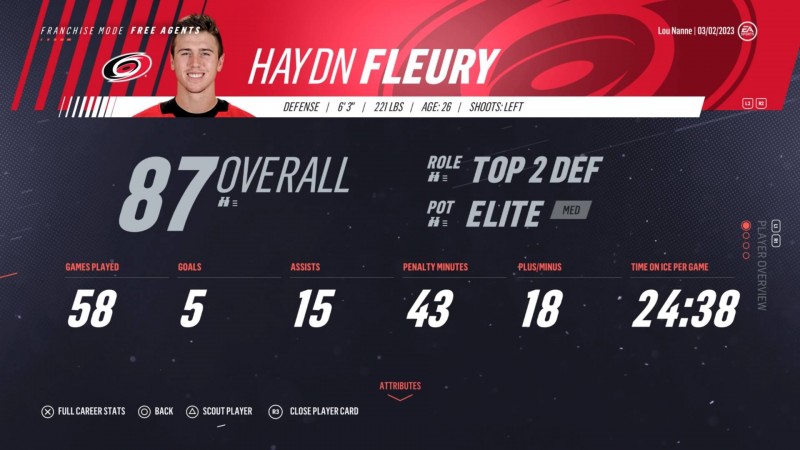 Keep An Eye On The NHL And AHL

If you don’t assign any scouts to the NHL and AHL, you’re going to be in big trouble when it comes to trades and free agency. Your reports on these teams degrade over time, making the information less reliable. That 83-rated, 33-year-old defensemen a team offers for a trade may actually be losing skills rapidly, but you won’t know it unless you have good intel. A good rule of thumb is to have one scout for every division in both leagues, which you can then use to generate quick reports on teams. When you want more information on particular players, you can assign the scouts to work up full reports as well. I like to keep tabs on players of positional need. If I am short on playmakers or right-handed defensemen, for instance, I comb through rival teams and generate full reports on likely trade targets in the off chance I decide to make a move.

Every year, teams decline to sign players to extensions and they end up in the free agency pool. Going into this critical part of the offseason armed with good intel can be the difference between making a fatal free agency calculation and finding a steal. In the last few weeks of the season, go to the Pending Free Agents menu under the Manage Contracts column in team management. Here, you can see candidates likely to test free agency. Click R3 to see their player info and hit triangle (or Y on Xbox) to generate a full scouting report.