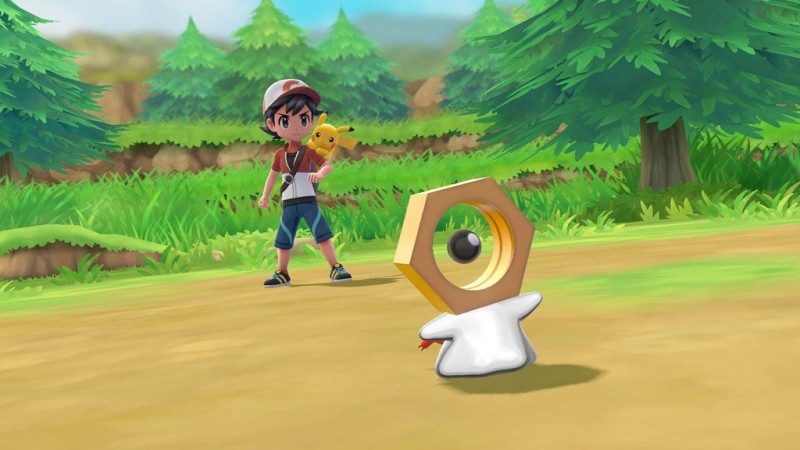 Update 9/25: The Pokémon Company has officially revealed the mysterious Pokémon to be Meltan, the Hex Nut Pokémon. A steel-type Pokémon that uses "its liquid arms and legs to corrode metal and absorb it into its own body," Meltan is now attainable in Pokémon Go, as players who encountered one only to have it transform into a Ditto when caught can now expect it to turn back into a Meltan. Unfortunately, it seems the Meltan has become a bit harder to come by than it was at first, but is still available for capture.

The company also confirmed that Pokémon Go will be "key to meeting this curious new Pokémon in Pokémon Let's Go!" This likely means capturing Meltan in Go will let you transfer to the Let's Go games, or that it will allow you to encounter one and catch it in the Switch games. You can watch a quick trailer detailing the "discovery" in the tweet below.

As Pokémon Go players were getting ready to catch Chikoritas for today's community day (they're likely to be shiny!), they discovered something else: A Pokémon no one has ever seen before.

Reports of a new critter being sighted reportedly began in the Asia-Pacific (the first time zone the community would start) region, according to Pokémon Go info site Silph Road.

The new Pokémon, which shows up as "???" in the encounter interface, looks like a tiny, silver Ditto with a hexagonal nut on top of it, except its single eye is located inside the nut. When caught, it shows up as a Ditto or Chikorita in your interface, meaning trainers can't add it to their Pokédex for now. After the initial reports, sightings of the Pokémon showed up across multiple regions, including New York and Minnesota (where our own dispatched reported Kyle Hilliard encountered one).

Some have also reported seeing Kecleon instead of the new Pokémon, and Silph Road later found that the new critter's cry matched that of the reptilian Pokémon.

What is going on? Is it a sly way to reveal a new Pokémon? A glitch that may be teasing the next generation of Pokémon may be hitting the mobile game soon? Is this the latest form MissingNo, and the game is trying to prevent us from getting 99 Great Balls in our inventory by turning it into a Ditto when caught? Only time will tell.